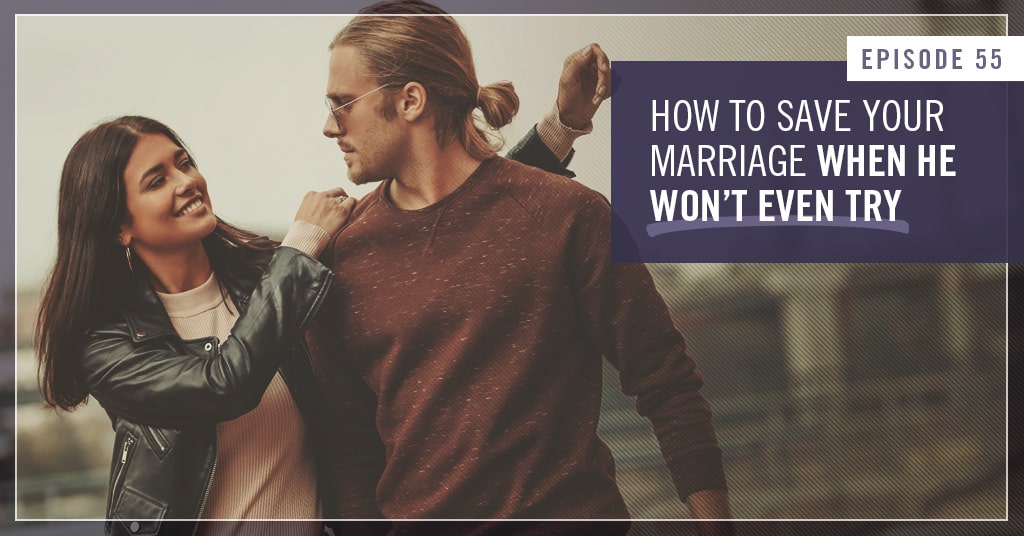 How to Save Your Marriage when He Won’t Even Try

One of the most painful things I often hear from a woman struggling in her marriage is hopelessness about her husband being unwilling to work on the relationship.

She’ll tell me he won’t go to counseling. He won’t even read a single book. He says “we’re not together,” or “it’s over!” He’s already with the other woman and building a life with her.

She’s already exhausted from all the work she’s done on the relationship, and it’s apparent he just doesn’t care. At all.

And he’s the one who has the anger problem or who doesn’t make any effort to spend time with the family or who wants to separate. He’s the one who left, or filed for divorce. So the idea that she can save the marriage herself seems far fetched, which is understandable!

The good news is that I’ve never seen a woman who truly practices the 6 Intimacy Skills fail, even if it seems like it’s too late.

And the thing that I see over and over again in these amazing, heroic women who commit to saving their families when the odds look insurmountable is that they’ve cultivated a particular skill and employed it in their marriages.

I’m going to tell you what that is, but before I do, I just want to say that what we know is tempting for just about every mere mortal woman in that heartbreaking situation is to ask your husband to change, even if it’s to tell him to come back home, or start showing up for the relationship. Unfortunately, that’s just a thinly veiled criticism, and nobody much enjoys that or finds it appealing. That’s just going to push him further away.

And okay, maybe he should do those things you’re wanting him to do. But unfortunately broadcasting that you know what he should do is probably not much different than what you were doing when your marriage fell apart and therefore isn’t going to help save your marriage. So it can make you feel more discouraged, and that’s not empowering.

On today’s episode of The Empowered Wife Podcast we’re talking about how to save your marriage when he won’t even try: