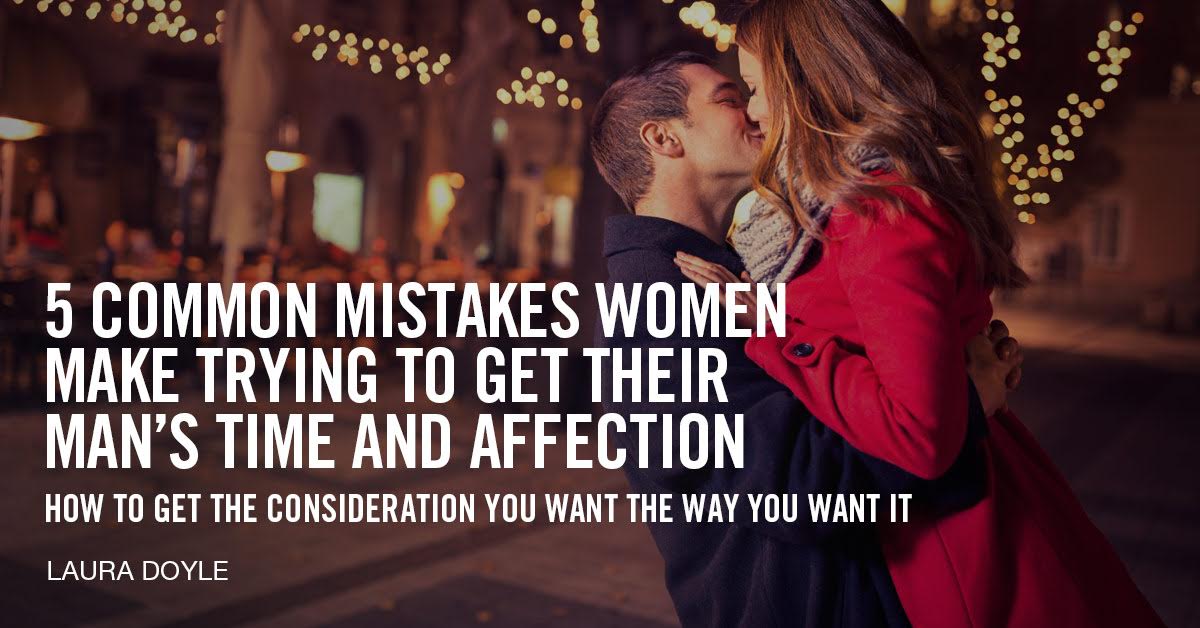 Wouldn’t it be a wonderful world if marriage came with an easy-to-follow instruction manual?

But since it doesn’t, you bumble along trying out relationship advice you got at the hair salon, from well-meaning friends and even strangers at bars.

They say things like “Never go to bed angry.”

Sounds wise, right? But another way to say that is “Stay up and fight,” which doesn’t seem like such a great idea after all.

There’s a lot of bad relationship advice floating around disguised as “common sense.” Maybe that’s why so many marriages are falling apart.

Here are 5 common mistakes that wives make to get more time and attention from their husbands. Click To Tweet


1. Pointing Out That He’s Not Giving You Time and Attention

Isn’t it just honest–even important–to let your partner know when he’s not meeting your needs?

If you don’t tell him he needs to be more attentive and affectionate, how will he know, right?

The problem is, pointing out what he’s doing wrong is the same as complaining.

Gandhi was right when he said, “Don’t complain. Complaining won’t take you anywhere. Nothing will change unless you change.”

But did that stop me from complaining to my husband that he should spend more time with me and pay more attention to me?

I’d say things like, “You never spend any time with me” or “Why don’t you turn off the TV for once so we can talk?”

As you can imagine, those words didn’t inspire my husband to whisk me off to a romantic dinner, have a long, deep conversation or walk hand in hand on the beach.

To put it in perspective, imagine hearing those words from a friend. You’d think the friend was needy, or at least unpleasant.

In other words, pointing out what he’s not doing will only make him less inclined to give you his time or attention.

Don’t worry–there’s a much more effective way to get the connection you crave, which I’ll tell you about in a minute.

But first, are you making this common mistake?

2. Asking Him for Time or Attention

Maybe you’d say something like, “Can you come home from work on time so we can spend the evening together?” Or, “When can you make time for me?”

But that approach can never be satisfying if you want him to want to spend time with you.

If you’re like most women, you want to feel irresistible and attractive to your husband–body, mind and soul. Having to ask for time and attention will never satisfy that desire.

Also, asking isn’t necessary. Remember when you were falling in love and you couldn’t get enough time together? You didn’t ask him for attention then.

You might think that’s because he was putting his best foot forward and now that you’ve settled into real life he’s more interested in football or video games than he is in you.

But what if there was actually something you did naturally then that you’ve since stopped doing? Something that made you irresistible to him?

We’ll get to that, but first let’s see if you’ve ever made this mistake.

3. Hanging Around Waiting for Him

Another common mistake is arranging your schedule according to when he’s available instead of according to your own desires.

Shawna stayed home most nights and weekends hoping that her husband would be available to her, but it rarely worked out that way. Instead, she found herself waiting around bored while he worked late or even made other plans.

Resentful that she was the only one making their couple time a priority, she was often angry by the time he showed up because it was too little too late.

That perpetuated the cycle of him avoiding her. After all, who is going to feel drawn to a resentful, prickly wife?

It wasn’t until Shawna started making her own plans–even if that meant they wouldn’t be together–that her husband started seeking her out more.

Her interesting, enjoyable life made her much more appealing.

Leah’s husband was an avid golfer, so it seemed like a good idea to her to sign up for lessons so they could have more couple time. She envisioned them having lots of laughs and long talks on the links.

But before long it was clear that golf just wasn’t Leah’s thing. It felt like a chore, and her husband didn’t seem to appreciate the sacrifice she was making for the good of their relationship.

Their golf conversation was stilted at best. Sure, they were together, but Leah wasn’t feeling the connection she craved.

When Leah announced that golf just wasn’t for her and went back to her yoga classes, her husband seemed relieved. She was too.

When she went back to her favorite activity–which filled her up and made her feel good–her husband was more drawn to her at home.

Pursuing their hobbies individually made them both happy and gave them something interesting to talk about when they reunited.

5. Doing Things for Him so He’ll Have More Time for You

Finally, one of the most common mistakes women (like me) make when trying to get their husband’s time and attention is tending to his responsibilities so he won’t be so busy.

The theory is that if he has more free time, he could spend it with you.

But doing things for my husband that he could do for himself backfired.

Here’s why: If you make his invoices for work, pack his lunch and go to the dry cleaner for him to give him more downtime, you begin to resemble his mother.

Men are not romantically attracted to their mothers.

Also, expending all that energy on his chores could wear you out and even make you resentful, neither of which is attractive.

Which brings us to what will get your husband’s time and attention: a respectful and ridiculously happy wife.

One of the things that originally attracted your husband was that you respected him. You thought he was smart and capable. That made you special and irresistible.

And happy wives draw their husbands to them like a magnet. The more he sees you smiling and laughing, the closer he wants to get.

Which of these mistakes have you made in the past? To join in the conversation, post your answer in the comments section below.