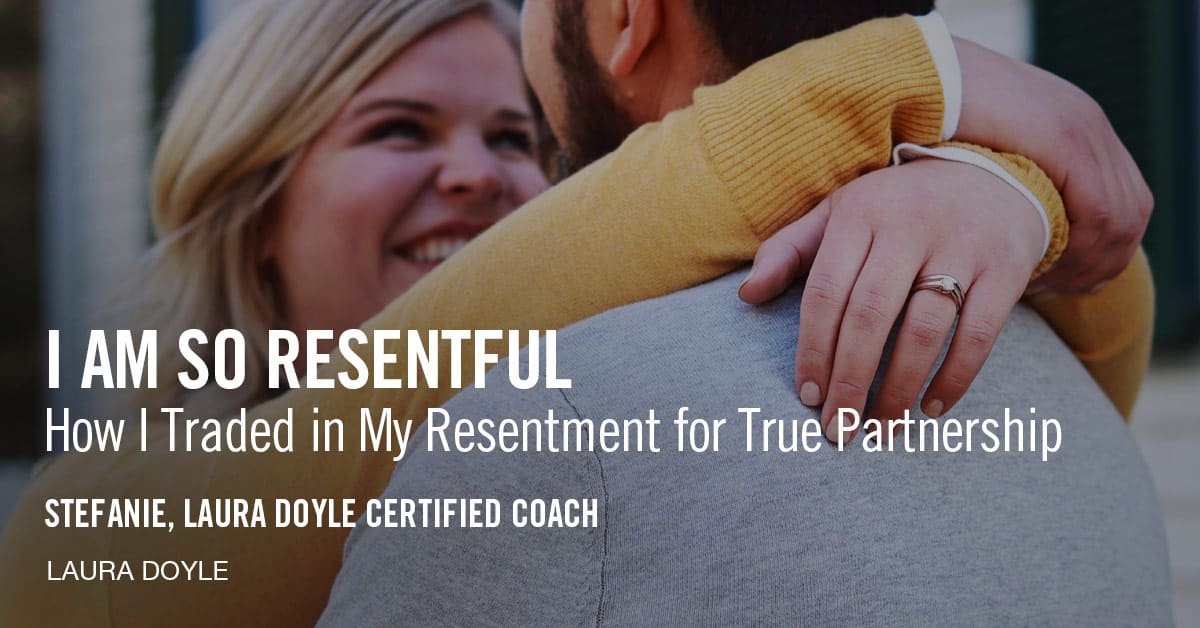 I Am So Resentful

How I Traded in My Resentment for True Partnership
Stefanie, Laura Doyle Relationship Coach

I remember when I learned that the word “resentment” comes from the French word “sentir,” meaning to feel. As in feeling something over and over.

No wonder my opportunities for chronic resentment were on automatic replay in my head.

And I lost no opportunity of telling my husband about them. I was overwhelmed and unsupported, doing everything myself.

My deepest fear had come to fruition: I was alone. Or at least it felt that way.

My definition of marriage had been clear (to me, at least). It would be a partnership, everything split 50/50: the bills, housework, childcare. But for some reason, this was not happening.

How could this be? When I met Marco, I didn’t think people like him existed. He was so happy. He said that the word “stress” was not in his vocabulary and that he was here to simplify my life.

But it wasn’t so simple. Who would want a peaceful romance when I could opt for drama? I seemed addicted to it, with zero experience having a peaceful relationship.

We were just too different. I’m vegan; he’s mostly carnivorous. I worked days as a professor; he works nights as a waiter. I’m a reader; he’s a TV addict. I’m too serious; he’s too carefree.

The naysayers in my ear said it would never work, and I started to see that they must be right.

I don’t know why Marco stayed with me. I broke up with him sometimes weekly. The security guards at my apartment must have laughed watching his TV go out the door with him, only to return within a day or two every time.

As I neared thirty-five, my biological clock was ticking louder than ever, and I needed to make sure he was “the one.” How could I have a baby with someone I couldn’t trust to take out the trash?

I was like the woman in the cartoon holding a sign saying “waiting for Mr. Perfect.” She was a skeleton.

Then, one day, Marco proposed. As we left the gourmet vegan restaurant (he loved me enough to try raw swiss chard), I flipped on the radio, and the Shirelles’ song “Going to the Chapel” was playing.

Today’s the day we’ll say “I do,” and we’ll never be lonely anymore.

My doubts and fears fell away. Finally, I put both feet in.

The sky remained blue and the birds kept singing as we bought a house, adopted a puppy, had a baby. My fears of being like those couples whose baby drove a wedge between them turned out to be unfounded. Our bleary eyes kept smiling at each other, the mutual sleep deprivation yet another connection between us.

I felt such gratitude for my dreams coming true that things remained blissful for most of that first year of motherhood.

Then, Marco went back to work.

Increasingly, I felt like I had to do everything, like I was the only grown up in the house. His happy-go-lucky demeanor, which had attracted me, became my bane.

I was overwhelmed. I was trying to manage everything and failing miserably. I kept trying to come up with a system to make things run according to my standards, but Marco was so unmoved by my chore charts and spreadsheets that they would have been more useful as toilet paper.

I sought out self-help mentors, who listened patiently as I complained about—what else—Marco. I worked on myself, but even with my more glaring shortcomings in check, I continued complaining about Marco until one mentor suggested I read The Surrendered Wife.

I recoiled. Me, surrender to Marco? I don’t think so! But, I was desperate enough to check out the book.

Of course, it resonated with me. I was the control freak bemoaning her lazy husband watching TV all day rather than spending time with or supporting her.

At the worst of times, he was incompetent; at the best, I was just smarter.

By this time, he should have known the right way to do things: my way. Though he had barely cooked anything in his life, he would make exotic vegan dishes for me. But I told him to wash the vegetables, which pan to use, how to heat the oil.

For his inexhaustible honey-do list, I told him what to do and how to do it. I knew I had always been hypercritical, but after all this work on myself I was better now. Or so I thought until Laura’s book showed me differently.

Respect? I used to quell the urge to throw something at his head and settle for swearing at him instead, while lamenting that his cursing was unacceptable and traumatic for me. Then we’d argue about arguing, and I’d end up in tears, feeling lonelier than ever.

The Shirelles had lied.

My resentment took aim at his going out. If only he didn’t stay out so late, he would have time to spend with me, time to help me. I resolved to give him an ultimatum.

Only, I knew I would not be prepared to leave him if he did not comply with my demands. Not to mention, I wanted another baby and was soon pregnant again. I decided to put both feet back in and commit myself to Laura’s suggestions.

The first phrase I tried on was “Whatever you think.” It was freeing not to have to solve his problems or tell him what to do or say or wear. (Other family members happily filled in for me, and I could sit back and smile, confident that my man had his own answers.)

When I gave up micromanaging him, I found the silence to explore my own desires.

When resentment creeps back in, my favorite Intimacy Skill comes to the rescue: gratitude. Sometimes I have to force myself to find something to say thank you for, but it always shifts my perspective.

We now have a culture of gratitude in our home. My three year old would even say, “Thank you for saying ‘you’re welcome.’”

How do you respond to that?

My refrain used to be that I didn’t feel supported. Now, I feel so supported that it’s sometimes hard to accept.

When I wanted to fly cross-country for the Cherished for Life Weekend right after being laid off, Marco said to go for it. When I called two days later to say I wanted to blow my (soon to be our) savings to train as a coach, I was sure he’d say I was being naive. Instead, he said, “You would be perfect for that. Go for it!”

I’m still overcome with gratitude to think that, if not for his support then, I wouldn’t be doing what I feel born to do today as a certified coach.

I long for the days of watching TV with that “lazy” husband of mine as he works multiple jobs to support me so I can stay at home with our two boys.

Yes, he even takes out the trash now and, despite claiming to have been traumatized washing dishes in the Marines, does that too!  Not to mention he is a doting father who takes care of the kids whenever I have work to do or a nap to take.

I’m still prey to the illusion that I’ll find the right system to Get Things Done. When I have the urge to dust off those chore charts and honey-do lists, I instead jot down my desires so they stop running circles in my mind. Marco snatches my list and sets to work to fulfill my desires.

As he was leaving the house one day and I asked where to, he said, “To make your dream come true!”

Amid such gallantry, I feel like a queen. With a toddler and a newborn, the chaos gets to me sometimes. But even with baby vomit in my hair, it feels luxurious.

When I get overwhelmed or annoyed at Marco for not doing something “right,” I know what to do (start by washing my hair).

It looks like I’ll have to cut the Shirelles some slack after all.

6 thoughts on “I Am So Resentful”