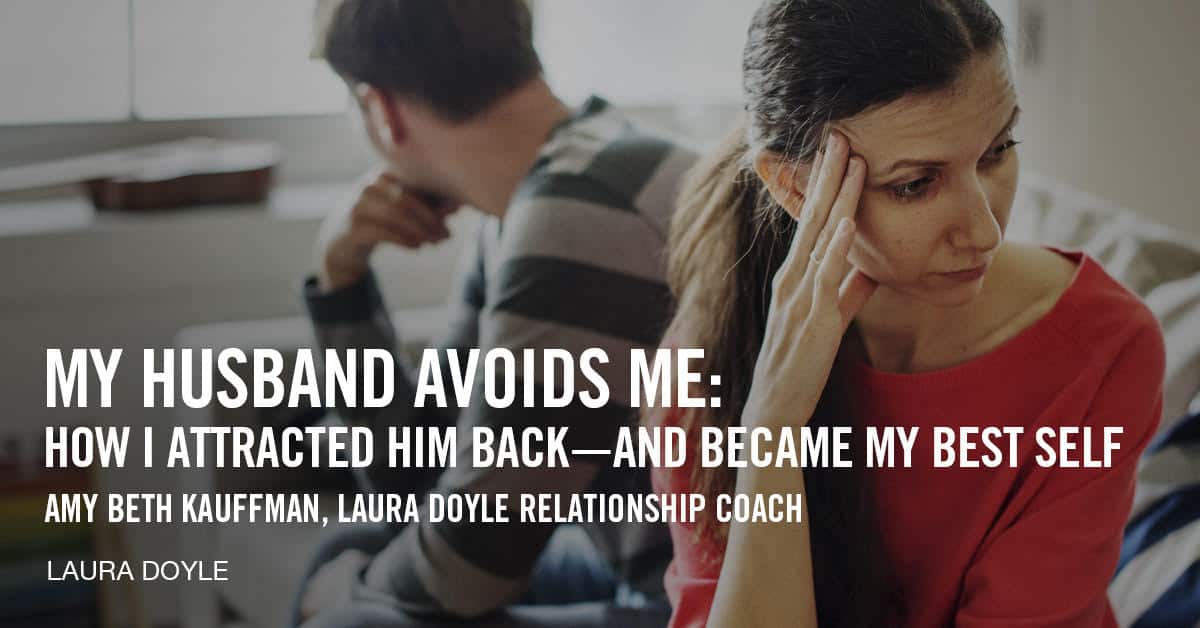 My Husband Avoids Me

How I Attracted Him Back–and Became My Best Self

I met my husband 27 years ago, the day I moved to a new apartment. We ran into each other by chance in the lobby as he was leaving a friend’s place. He then turned around to come back upstairs with his friend and me to hang out longer.

A month later, he drove over to my apartment to ask me out on a date, and we have been together ever since.

I married him for many reasons: He was smart, gentle, stable, reliable, generous, compassionate, hard-working, and he has amazing green eyes! I thought the world of him.

He was attentive to me, planned dates for us–everything from lunch to vacation–and we were fortunate to have the family of our dreams. It was a fairytale.

We decided that I would put my career on the back burner to be a stay-at-home mom. It made sense financially and emotionally. Motherhood was wonderfully exhausting, but I was lonely for my husband.

While I waited at home for his attention, he was becoming a superstar at work. He received promotion after promotion, which I was proud of and yet, I began to feel less important and less worthy than I was.

I unfairly expected him to fulfill all my needs for attention, affirmation and affection.

I had no idea I had the power to banish my loneliness and attract my man back, without being needy. Click To Tweet

I see it now. It plays back in slow motion in my head.

As he pulled away with great enjoyment for his job, I felt rejected. I am sure I encouraged his response with my begging, demands and criticism. I didn’t know what else to do.

Over the years of trudging through, our marriage slowly declined, even as we held hands and snuggled all the while. On the outside, we appeared the happy couple. We wore the masks well.

We did love each other, but there was an unspoken dissatisfaction between us. I had no idea how to fix it.

The needier I became, the more he escaped to watch TV or work. He continued to pull away from me and began to spend more time at the office. The attention he sought was not mine but what I used to be: young, sweet, happy and ego boosting.

I forced him to go to therapy with me. I thought the therapist would convince him to change since I wasn’t having any luck. It didn’t work.

He was not inspired to engage more with me. In fact, therapy had the opposite effect: He resented being dragged there and, consequently, had even less to say to me.

Eventually, I found Laura Doyle’s Six Intimacy Skills™ online. I watched an introductory course and related to every word she said. I signed up because, as Laura asks, “You’ve tried everything else you can think of. Are you willing to try one more thing?”

I was ashamed to learn I was controlling.

He’d told me I was bossy; I thought I was helpful.

He’d told me I was needy; I thought telling him what I want, how and when would make it easier for him.

Suddenly flooded by memories, I heard my voice: critical, demeaning, demanding, begging. I heard his voice: “Why don’t you appreciate what I do do,” “Nothing I do is ever right,” “I can never please you,” “I do things differently than you and that doesn’t make it wrong.”

My old words had repelled. My new words had to inspire.

I started with duct tape. I asked myself whether what I was considering saying would bring me closer to my goal of connection. The answer was usually no, so I stayed quiet. It was an enormous change from being the one who had done all the talking.

I started to listen when he spoke, respect his opinion by saying “I hear you” or “whatever you think” and by trying what he suggested if I’d picked his brain about how to do something.

I stopped managing everything.

I increased my self-care. I hadn’t realized the toll that neglecting myself took on my outlook!

I started to ask myself “How do I feel? What do I want?” I began believing in myself. The 6 Intimacy Skills™ taught me to give myself grace for not having known better all the years before.

Moving one step forward and half a step back, I slowly attracted his attention back.

It is amazing what is possible! I am so happy I had the courage to try one more thing. The connection between us now surprises and delights me as it continues to grow.

My husband asks me to watch TV with him every night, thanks me for making dinner, tells me I look beautiful, and smiles at me. He calls me each work day thinking about me, and he tells me about his day. One of my favorite things is how often he tells me he loves me.

I feel loved and desired once again. I am peaceful, secure and ridiculously happy.

I am full of gratitude for Laura Doyle and the Intimacy Skills. They’ve given me the chance to become the best version of myself and revitalize my wonderful marriage.

12 thoughts on “My Husband Avoids Me”