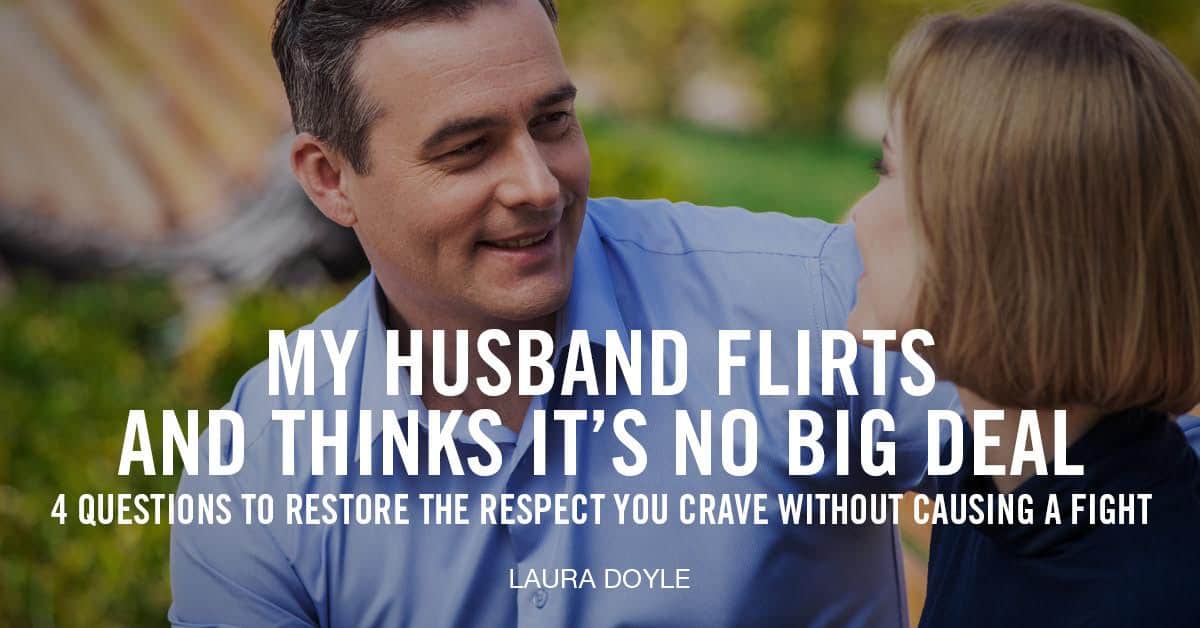 My Husband Flirts and Thinks It’s No Big Deal

It can shake your confidence and make you feel less desirable.

But when you hear his voice lilt when he’s speaking to another woman or catch him texting or Facebooking her, that sets your alarms off and makes you feel truly terrible.

Can you really trust him? Is it completely innocent, like he claims? Or is he crossing the line?

Where does it stop?

Sometimes there’s no real way to know, so your mind wanders and strikes fear in your heart.

Fortunately, you can restore your confidence, get the respect you deserve and preserve the passion, all at the same time.

Here’s an insight that changed my whole life: Whenever I’m tempted to control the way my husband interacts with other people, it’s because I’m afraid.

I’m afraid he’ll make the wrong impression and I’ll feel embarrassed, or that he won’t get a good deal and I’ll have to go without.

If I’m not afraid, I don’t have to try to control.

When you find yourself trying to get your husband to stop flirting with other women, it’s because you’re afraid of something.

Knowing the answer to the question “What are you afraid of?” is a good start to tapping into your power to inspire his undying loyalty to you and only you.

When I learned that my husband had looked up three ex-girlfriends on Facebook, it gave me pause.

I remember wondering why he would do that. I realized I was afraid he was still thinking about them, which I didn’t like.

I was afraid he might reconnect with one of them and renew their relationship.

If I kept going, I could worry that would lead to him cheating or abandoning me for someone else.

Maybe that’s what you’re afraid of too.

Or your fear might be something else entirely. Once you unearth your fear, let’s move on to the next question.

2. Ask Yourself “Is My Fear Realistic?”

I knew it was realistic that my husband still thought of his ex-girlfriends occasionally. After all, he had looked them up after decades of being out of touch, so clearly they had crossed his mind.

But when I ask myself whether it’s realistic that he would ever rekindle a relationship with any of them in person, much less cheat and leave me, I have to admit that seems unlikely.

First of all, I heard about this offense from him sharing it with me. There was no sense of secrecy about it.

But even if he did reconnect with those women in some way, I know that my husband is committed to me.

Maybe you too feel confident that while your husband can be a flirt at times, he’s also completely devoted to you.

Deep down, you know he’s not going anywhere with anybody else.

In that case, it’s kind of fun to pull out your fear and acknowledge that it’s unfounded–like looking under the bed for the monster and finding it’s just a boot and a pair of socks. Phew!

Asking yourself whether your fear is realistic is a great way to stop feeling bad when your husband compliments another woman or uses a sweeter-than-usual voice to greet a female coworker.

This is also a good time to remind yourself that despite the jolt of adrenaline that comes up when you hear him sounding flirtatious, you are safe. He’s just being friendly or playful–not trying to form another relationship.

You can choose your faith over your fear by deciding not to give him the stink eye, for example. Instead, you could show him that you expect the best outcome, not the worst.

Like responding to him looking up an ex on FB by playfully saying, “I bet you’re glad you married me instead of her, huh?”

I’ve found that’s very powerful for getting the outcome I want.

But what if you don’t feel safe?

Maybe you’ve been cheated on before or have been left for another woman.

Maybe your husband himself was unfaithful in the past and you’re terrified it will happen again.

That’s completely understandable. Of course you would want to do everything in your power to avoid that painful experience.

So maybe your answer to this question is a resounding “Yes! My fears are completely realistic.”

In that case, let’s proceed to the next question.

3. Ask Yourself “Can I Control His Flirting?”

What you want is for him to stop paying attention to other women–to stop looking into their eyes, making them giggle or rubbernecking at their bikinis.

The more you focus on trying to get him to stop flirting with other women, the more your husband will feel constricted, controlled and criticized.

The more he feels that way, the greater his urge to be the master of his own destiny. In other words, he’s going to have an inner compulsion to do the very thing you’re trying to get him to stop doing just to show that you’re not the boss of him.

Humans are contrary like that. Fruit seems sweeter when it’s forbidden.

This is true of all control, not just control around flirting. Whatever I’ve tried to get my husband to do or not do using control has backfired on me.

When I tried to control him by making endless spreadsheets showing who was responsible for what housekeeping (so he could see all the duties he was shirking), all I got was wall-to-wall hostility–not the gleaming bathroom and dust-free shelves I wanted.

The truth is I was afraid that if I didn’t tell him which chores were his, I would turn into a kitchen elf who had to do everything herself.

So guess what happened because I tried to control him?

I became an exhausted kitchen elf who had to do everything myself.

In other words, my control had the opposite effect of the one I wanted.

Granted, dodging the dusting is different than winking at women. The point is that trying to control my husband into doing things differently made things worse. Much worse.

So it’s valid to ask yourself: Is getting upset or telling him not to flirt actually getting you the outcome you’re looking for?

When Janice insisted that her husband stop working out with his female coworker, not only did he not stop, he also let her know she wasn’t the boss of him.

He seemed more intent to meet up with his workout buddy than ever.

Telling your man to stop flirting is very likely to have the same contrary outcome.

4. Would It Be Worth the Intimacy It Costs to Try to Control Him?

When he flirts, it hurts.

As his wife, you may feel it’s within your rights to ask him to stop Facebooking a coworker or working out with her at the gym. Plenty of people would tell you that it’s your prerogative to draw the line.

I’ve certainly done things like that in my efforts to get my husband to do what I wanted (or not do what I didn’t want him to).

Not only did it not work, it cost me intimacy. Big time.

I felt the need to draw the line recently when he wanted to save a limp houseplant that I wanted to throw out.

“I’ll put it in the backyard,” he announced.

Instead of expressing a desire, I decided to supervise this plant placement so that the backyard would not look messy.

In other words, I chose my fear and my need to control in that moment.

He set it down next to the bench, and I “helpfully” suggested a different spot. He moved it to my spot but didn’t like it there so he picked it up again, and I asked where he was going to put it as he walked across the yard with it.

At which point he dramatically dropped the plant and said, “Just forget it!”

Clearly he felt controlled. That’s because I was being controlling.

It took half an hour before things were back to feeling connected and easy between us again, and that’s a long time for us these days.

Trying to control costs me the intimacy and connection I’m used to having now. And it doesn’t make my husband do what I think he should do. That’s true whether it’s telling him where to put a plant, who to talk to or how to talk to them.

Here are three ways I help myself do that:

First, I remind myself that I’m the Goddess of Fun and Light (GOFL). Since I want him to flirt with me, I make sure I’m in good flirting form with my smile and laughter at the ready.

The GOFL is always up for a good time, and I signal that by doing my happy dance around the house or saying how ridiculously happy I am.

Second, I check to make sure I’ve been respectful. Respect is like oxygen to men, and I want to make sure there’s plenty of that when he’s around me so he’s not gasping for it.

Next, I make myself drop and do ten. Gratitudes, that is, about the many ways I feel loved and chosen by my husband–the many ways he’s loyal to me.

He chose to marry me above everyone else, sleeps with me every night, makes love to me and only me, spends money on me, kisses me, sends flirty texts to me, has made himself beloved in my family, makes up silly songs every day about how cute I am, makes me laugh and makes me tea every morning.

I could go on, but ten are usually enough to calm me down so I can choose my faith by trusting him.

Ten gratitudes are enough to make me stop fretting and realize I’m lucky I have a man who’s as faithful as the U.S. election cycle is long.

My husband is a mere mortal man meant to be attracted to the female form, but I don’t see him making anybody else’s tea every morning.

I see him being true to me. I focus on that because that’s what I want to continue to manifest.

When my husband looks into my eyes and sees that faith I have in him, he responds to me with pride in how loyal he is to me.

That leaves me feeling special and gives me the inner strength that makes it easy to trust my husband.