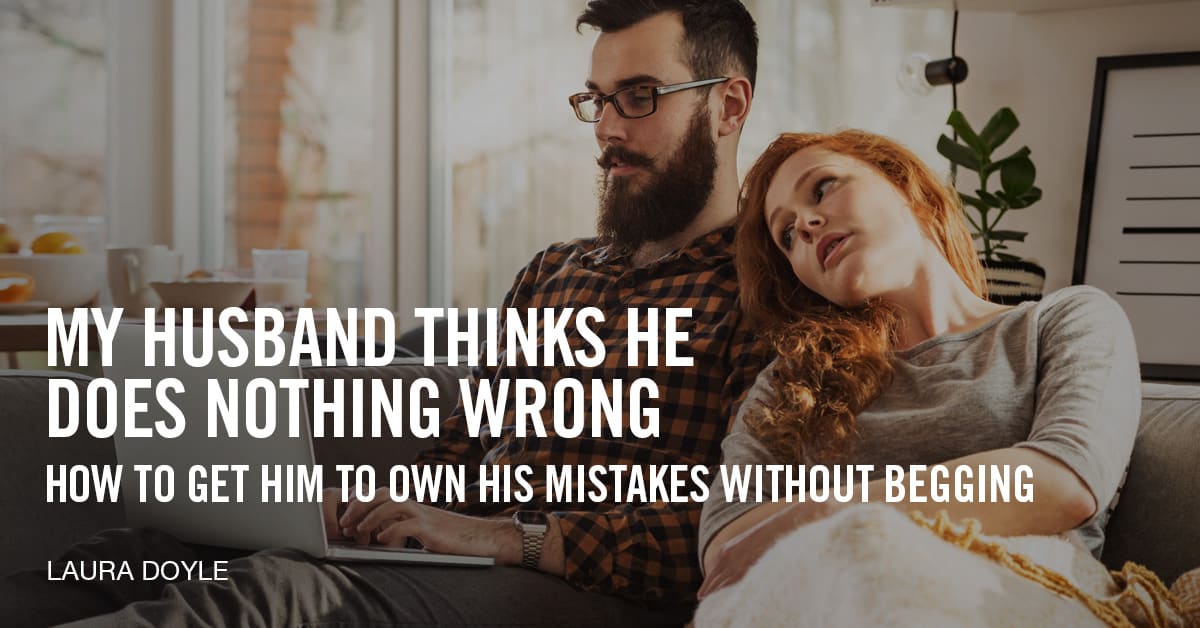 How to Get Him to Own His Mistakes Without Begging

If your husband makes you feel bad about yourself, it’s so hurtful.

Maybe you’ve had to hear the worst things a husband can say to his wife.  That is no fun.  It’s not right either–you should not be treated like you don’t matter.

If he then turns everything around on you, as if it’s all your fault, it can make your head spin.  That’s enough to make anyone feel hopeless.

Especially if you’re doing all the work to try to make things better but he makes no effort to change, as if he were God’s gift to the universe, perfect exactly as he is.  And, without two to tango, how is anything ever supposed to get better?

No matter how hopeless things may seem right now, the good news is that you can get the respect you deserve.  You probably just haven’t been shown how.

Here are four essential hacks to get him to own his mistakes–no begging required.

1) Bring Down His Defenses

Kristen’s husband went off the rails complaining about her messy car and criticizing her for letting their children trash it.

She was tempted to defend herself and rail right back, “Don’t you think I want a clean car too?!”

Instead, she responded with just one word: “Ouch.”

“No, seriously,” her husband retorted, now criticizing her vulnerability too.

This took not only vulnerability but a lot of courage given that her husband had made it clear he did not like this whole “Ouch” thing.

Nonetheless, to Kristen’s amazement, intimacy was restored immediately.  He softened and let out a little laugh.  He then proceeded to have a talk with the kids–and clean the car himself.

Even beneath his supposed criticism, it was clear how important it was to him that his wife get to drive the nice, clean car he had bought her!  This is a heart message she likely would not have heard had she RSVPd yes to the argument.

Next time you receive an invitation to a fight, how would the dynamic change if you expressed your hurt with a simple “Ouch” and left the room?

Showing up so dignified and respectful yourself–and giving him the space to see that he has just hurt the woman he loves, without his being on the defense–is a powerful combination to inspire him to see his part.

2) Call a Truce in the Blame Game

Maintaining your dignity and respect is easier said than done when he knows exactly how to push your buttons, especially when you’re unfairly blamed for something and he refuses to take any responsibility.

I figured I could remedy that by pointing out the error of my husband’s ways, but somehow this never made him want to be the better man I was hoping for.  My criticism was clearly not inspiring, which makes sense since being criticized does not motivate me to change either.

Would you rather be right, or would you rather be happy?  If you’re anything like I was, the answer is both!  I was all about keeping score and figuring out who was at fault.  Especially during a heated argument, I couldn’t resist getting out my scorecard, pointing out who had left the dishes unwashed and forgotten to pay the bills.

The problem with my scorecard was that it meant there would be a winner and a loser.  I was convinced he was the loser, but somehow I kept losing out on the peace and passion I craved.

Tamara knew she needed a new one when her man left her.  As devastated as she was, she saw her part in the breakdown and realized she had some cleaning up to do.  She decided to experiment with the phrase “I apologize for being disrespectful when I…,” filling in the blank with ways she had criticized or controlled, dismissed or demeaned him.

Restoring respect pumped the oxygen back into her dying relationship.  He started helping her with whatever she needed around the house, serving her tea, opening up to her, complimenting her, rubbing lotion on her back, giggling and flirting with her.

Even when they had a conflict about the lawyer and he broke his plans to come over, accusing her of refusing to sign even though she had agreed to, he came over after all.  Unfortunately, he ended up flying into a rage at not being able to print the agreement and left in a huff.

Tamara somehow managed to stay respectful throughout all this bait.  She went for a walk to clear her head.

She was so touched when he then texted her a long apology.

She planned to respond when she got home, but he couldn’t wait.  Thirty minutes later, he called.  That alone was outside the norm.  But what really blew her mind came next.

He apologized for blaming her and said, “I want to be respectful.”

He had never said that before.

If you’re ready for mutual respect and accountability, why not think big picture?  Instead of dissecting whose fault it is, how would things change if you focused on your side of the street?  Even if that meant apologizing for only a small comment you made that contributed to the melee?

If your husband makes you feel bad about yourself or treats you like you don’t matter, I bet you could give me a whole list of evidence for that right now.

For me, the evidence seemed overwhelming.  Problem was, when I went around saying things like “He treats me like I don’t matter,” that’s all I saw.

I found out the hard way what a powerful manifester I was.  What I focused on increased.

I realized that no one always shows up in any way 100% of the time.  So I did an experiment and flipped my complaint into the experience I wanted to have.  When I flipped my Spouse-Fulfilling Prophecy “He’s a Loser Pants when it comes to money” into calling my husband “Mr. Moneybags,” for example, he started his own business and became more successful than he ever had been.

What story are you repeating to yourself, your man, or others?  Is your story unwittingly magnifying the problem like mine was?

What if you tried on a new Spouse-Fulfilling Prophecy and started gathering some new evidence?

Be prepared to find out what a powerful manifester you are!

If your man has been putting you down, it has a way of getting to you.  It’s easy to start internalizing that you’re somehow not good enough, leaving your self-esteem in the gutter.

And waiting for him to make you feel better about yourself can make for a long waiting game.

Instead of waiting for him to treat you right, why not start by treating yourself right?

When I was being treated badly, I was a big culprit in giving myself bad treatment.  Then, I decided to become responsible for my own happiness by putting my self-care first.  For me, that meant lots of volleyball, dancing, napping, walking, reading, getting facials, drinking tea and eating chocolate.

Treating myself in such an esteemable way boosted my self-esteem, which increased my magnetism.  Seeing me happy made my husband want to pile on more good treatment to make me even happier.  Talk about a virtuous cycle!

Focusing on my own happiness also got me off his side of the street.  I didn’t have to solve his problems, baby him or fix him.  Giving him the space to tackle his own issues head on allowed him to take more initiative and show up as a man, which made him a lot more attractive too!

Doing my own thing also helped me give him his space rather than begrudging his self-care.  If I found myself getting annoyed that he was watching too much TV, that was a red flag to up my own self-care.

Letting go of having to spend every spare moment together nixed the neediness–which actually made him want to spend more time with me!

What would fill your self-care tank?

An essential part of my self-care is girl talk.  Not just with any girl.  Especially when it comes to sharing about something as important as marriage, I’ve seen how destructive it is to confide in the wrong people.  Sure, friends and family are all well-meaning, but it’s a rare breed who will stand for you and your marriage even when the going gets tough.

Turning to an outside confidante is a great way to diffuse emotional situations.  Seeking support you can trust can make all the difference when it comes to fixing your marriage.

Now that you know these four hacks, which will you try first to create the experience you want to have?