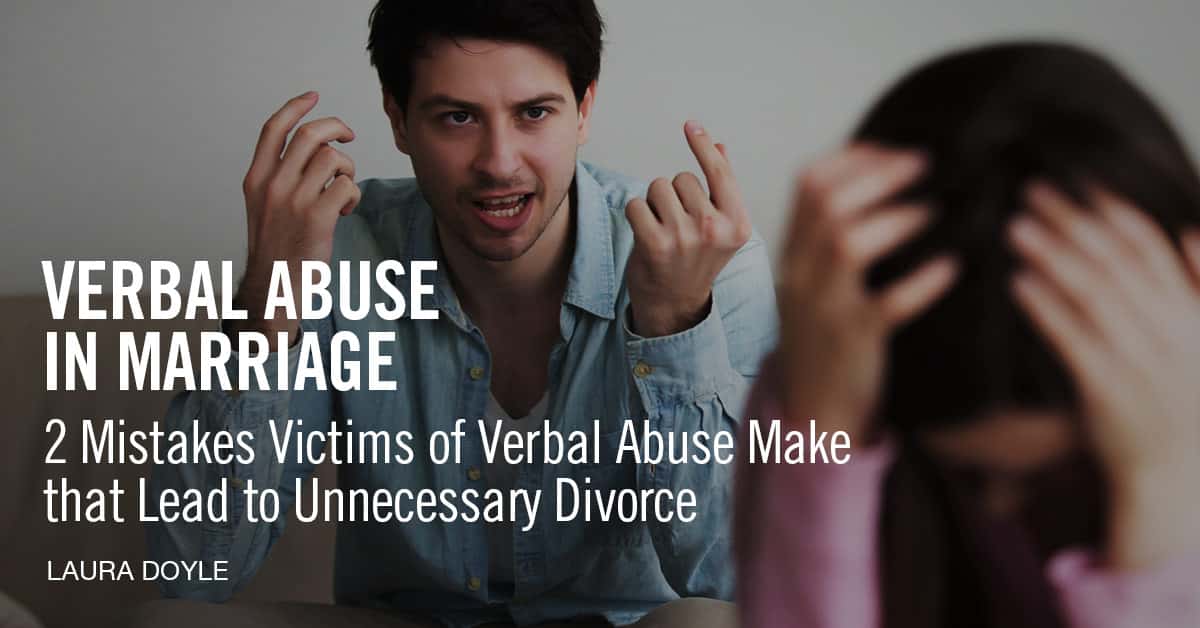 If you’ve been on the receiving end of a rageaholic’s repeated outbursts, you know how devastating it is to be verbally abused.

You know how demeaning, cruel and destructive it is to your self-esteem.

When that hurtful scenario keeps recurring, it seems only sane and obvious to get away from that abusive person permanently.

If you have no power to prevent your partner from exploding, what choice does that leave?

The only logical thing to do is divorce.

But what if you could reduce the blow-ups? What if they dwindled down to hardly ever? Or even none at all?

I wouldn’t have believed that was possible if I hadn’t seen it for myself. But now that I’ve also witnessed thousands of other women who have used the Connection Framework in their relationships to create the same outcome, I’m a believer.

You don’t have to take my word for it–you can see for yourself by experimenting in your own verbally abusive relationship.

Most victims of verbal abuse are making at least one of these common mistakes.

Just correcting them will go a long way toward bringing the peace, and with that, the passion and playfulness return.

One of the mistakes that I made early on in my marriage–and that I see SO many other women making–was being disrespectful to my husband.

And since respect is like oxygen to men, withholding it is a serious problem even if you don’t know that’s what you’re doing.

When I finally learned what respect looks like to men, including my husband, it was a shocker.

If you would have asked me early on if I was respectful to my man, I would have nodded vigorously and said “Oh, yes, I am! Except for the way he watches too much TV, all the junk he eats, what a slob he is and that he doesn’t make enough money.”

As I’m sure you noticed…that wasn’t respectful. At all.

Clearly, I had no idea what respect meant, but I thought I did. I didn’t even realize that I had something to learn because I’d been hearing about respect in marriage all my life and I assumed I understood it and was doing it. Mostly.

I had no idea I was part of the problem. I thought I just married a jerk.

I figured he had an anger problem and he needed to work on it for our relationship to improve.

Until he did, I was getting hurt a lot and it was chipping away at my self-confidence and Joie de viv. And he wasn’t even working on getting better about his verbal abuse as far as I could tell. Which is why divorce was looking like my best option.

What I didn’t realize is that my disrespect was also hurting his self-confidence and Joie de viv. It made him defensive.

To my husband, my disrespect was devastating.

The pain of knowing that the woman who knows him best in the world didn’t think much of him was too much to bear.

His defense was to be mean back.

That’s not right and it’s not fair, but it is human.

Abby had the same experience. She explained that because she wanted to help him be healthy, she’d told her husband how bad it was for him to drink soda and that he needed to stop–even though he loved to drink soda. His response to her concerned comment was to scream at her that what she said didn’t matter and to shut-the-bleep-up.

She wanted to know what to do about his verbal abuse.

But right there in her question to me is the part where she said, “I know better than you and you’re making a terrible, ignorant choice by drinking soda, you incompetent idiot! ”

Of course, those aren’t the words she used, but that’s how her disrespect landed on her husband’s ears, and that sounds pretty abusive once it’s translated, doesn’t it?

Who wouldn’t be defensive?

If your man’s hostility seems to come from out of nowhere, it may also be his inappropriate response to feeling disrespected.

That’s what it turned out to be in my case, and so many others I’ve witnessed as a relationship coach.

Mistake #2: Responding to His Verbal Abuse

Maybe you’re not disrespectful at all, or that has nothing to do with the rampages that your man goes on at your expense.

It could be, and often is, that he’s just in a fowl mood and he gets some kind of crazy release from unleashing a truckload of hurtful words on you, just because you happen to be there.

When that happens, it’s scary, and as a mere mortal woman, you feel defensive and hurt.

Maybe you argue with him to set the record straight and it just escalates and ends up being a huge blow-up.

Or maybe you don’t say a word–maybe you clam up and clench your jaw while he berates you. Maybe the tears roll down your cheeks and you just suck it up and hope it passes.

Whether you speak or don’t the hurtful words come.

What then? Is it time to find a divorce lawyer?

The idea is to make yourself safe, and being married to him leaves you feeling like you can’t protect yourself.

It’s as though he’s in charge of whether you’re safe, and you can’t control him, so that makes you his victim. And nobody wants to be a victim.

And you don’t have to be.

You can stay safe and teach your man how to treat you by honoring yourself in every moment of verbal abuse.

In other words, you can find safety inside of you instead of getting away from the perpetrator of the verbal abuse that you’re married to.

What if you stopped suffering from verbal abuse because you took care of you whenever it started?

And what if learning some simple procedures and following them just a few times would have him respond to you in a much more mature, calm way?

What if you changing your part of the dance made him behave so much better? Because that’s what I see again and again when women get the Connection Framework.

Of course you can’t change the way he processes his anger. But you can decide not to be the audience for his frightening, hurtful monologue.

Instead of leaving him for good, you can do what thousands of women all over the world have done to heal their relationships from verbal abuse: They learned how to stay with themselves and give themselves what they needed most to feel safe regardless of what her man was saying to her.

Suffering with verbal abuse is no way to live.

No one deserves that. It’s not your fault.

But it is your responsibility to make yourself safe, and it’s within your power.

And the best way to do that is an inside job: Learning the skills that make you safe from within.

88 thoughts on “Verbal Abuse in Marriage”