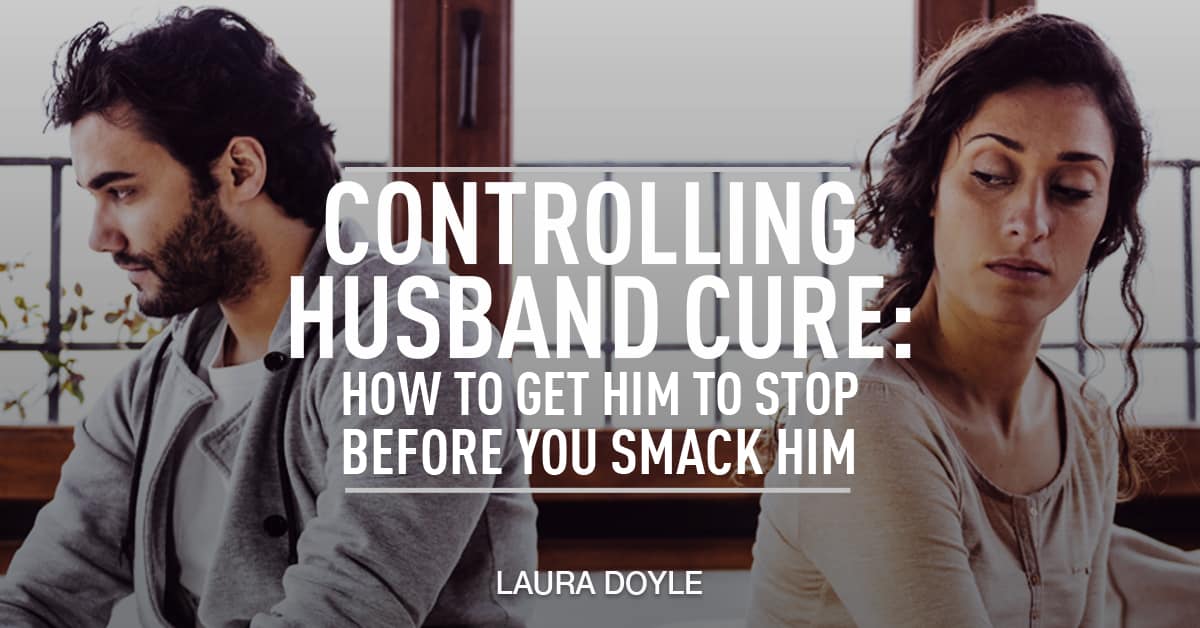 Controlling Husband Cure: How to Get Him to Stop Before You Smack Him

If he’s always telling you what to do, here’s what it means

Does your husband tell you how to cut an onion? How to drive? What to wear?

It’s no fun to have someone barking orders at you like you’re incompetent or a kitchen elf who should do his bidding.

You’ve calmly asked him to just relax or have gotten upset about it, and he still can’t seem to keep himself from telling you what to do and how to do it.

It gets discouraging. Who wouldn’t be defensive?

If you knew how to get him to stop, you surely would, but nothing seems to work. He just doesn’t get the message. So you struggle along, feeling hurt and angry most of the time.

That was Allison’s situation, and she couldn’t take it anymore.

She left her husband because he was so controlling. She felt like a prisoner at times and embarrassed when he told her how to cut the cake in front of everyone at a graduation party.

But when I showed her an approach she hadn’t considered, she decided she had nothing to lose by trying it.

That’s when everything changed. Now Allison is back with her husband and feeling like a newlywed again.

“I finally understand what people mean when they say ‘I can’t wait to spend the rest of my life with you,’” she told me excitedly. “That’s exactly how I feel.”

Here’s what I shared with Allison that helped her get there:

Allison had long complained that her husband was always controlling, overbearing and possessive.

“He’s the worst! I can’t go anywhere without him giving me a bad time about it,” she griped.

“I tell him all the time how controlling and overbearing he is, but he doesn’t want to change,” she went on.

That phrase, which she had repeated to him often over their 20-year relationship was an unintentional Spouse-Fulfilling Prophecy (SFP). She was affirming that he was acting precisely how she didn’t want him to.

Of course, he wasn’t always overbearing. That’s not possible.

But she wasn’t focused on the (rare) times when he was accommodating, patient or trusting. Those behaviors weren’t in sharp focus because they didn’t hurt.

Hurt makes you want to blame someone. That’s just human. But blaming someone can actually extend your pain by prolonging the negative behavior. You unwittingly reinforce what you don’t want by focusing on it and saying it out loud.

The late, great Dr. Wayne Dyer compared repeating negative affirmations to going on a shopping spree where you and find a lamp, a table and a rug that you hate then say, “I’ll take these. Ship them to my house.”

When you get home to an ugly lamp, table and rug, you think, “How did these get here?”

Of course, they’re there because you ordered them. You focused on them. You nurtured them and brought them home.

When I explained this to Allison, she got it instantly.

Instead of focusing on the times when he was overbearing, Allison decided to focus on the times her husband was behaving in a way that served her.

She thought about what she wanted to see in him and came up with the appropriate SFP: “You always see the best in me.”

But it sounded like such a ridiculous stretch that she could barely say it with a straight face.

She worried he would think she was being sarcastic or making fun of him.

That’s a great measure of an SFP: it usually feels like a bare-faced lie.

If you’re totally uncomfortable saying it because if feels fake, that means you’re on the right track. Click To Tweet

It’s not what you’re used to—it’s something better. It takes you out of your comfort zone.

The first time Allison said her new SFP, she was filled with fear and wondered if her husband would see her shaking and call her out for lying.

But what actually happened was that Allison’s husband stepped into her vision for him. He rose to the occasion and became the man he saw reflected in his wife-mirror.

Instead of controlling, he became admiring and trusting. Instead of possessive, he was tender and supportive.

“I can’t believe he’s the same guy,” she told me. “It’s such a transformation. But when I found my faith in him, he found his faith in me, too.”

What is your negative SFP? That your husband is sloppy? Too strict with the kids? Lazy? Workaholic? Distracted?

How could you replace the affirmation that doesn’t serve you with one that does? What would your new affirmation be?

Because that’s a good sign you’re going in the right direction.

82 thoughts on “Controlling Husband Cure: How to Get Him to Stop Before You Smack Him”