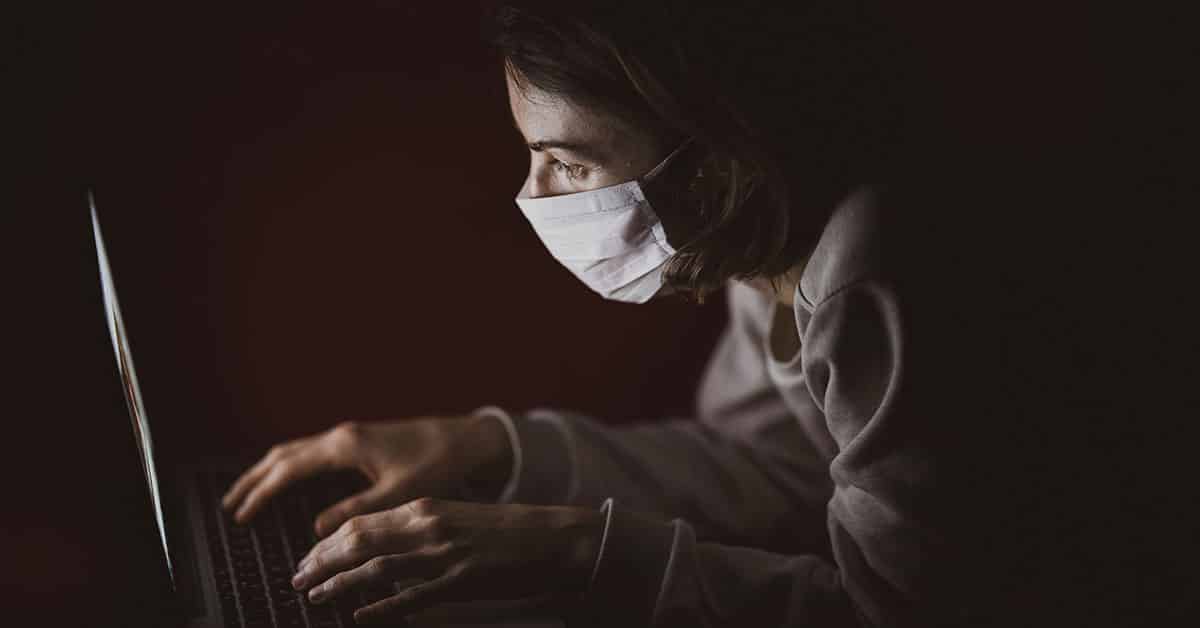 If you’ve been asking yourself why you’re so irritable or on edge, lack of solitude may be the sneaky culprit that’s affecting your mood.

Before quarantine you had time alone–maybe at work, on your commute, or when the kids were at school–and now you’re together all the time.

You still need solitude as part of your daily self-care. Without it, everybody you live with is going to get on your very last nerve, especially your spouse. Click To Tweet

You might be thinking it’s impossible to have solitude during quarantine.

It definitely requires some effort to put that structure in place, but it can be done.

Bonnie, one of my students with young children, has established a two-hour mama break in the afternoon every single day.

She is vigilant about having that time to herself and has trained everybody in the family that they can’t ask for a snack or even a hug or anything else during those two hours. She uses the time to take a bath, a nap, to read or journal.

She went from feeling ragged and irritable all the time to being the happy, smiling mom and wife she wants to be, all because she gives herself those two magical hours.

If even the idea of taking a timeout makes you feel guilty, think of giving yourself daily solitude as a way of giving the gift of a loving partner and parent to your spouse and kids.

Only happy people have happy relationships. If you’re not making yourself happy, it can cause a lot of extra drama and Needless Emotional Turmoil.

So you wanna ask yourself, how can you carve out some alone time every day as part of the new normal as a way of being a better spouse?

Mistake #2: You Have a Negative Spouse-Fulfilling Prophecy

Now that we’re all so close all the time, your partner’s flaws can seem really glaring, and it’s only natural that you not only notice them but comment on them. So you might be saying to your spouse: “You are such a slob!” Or “You’re drinking too much!” Or “You’re wasting money!”

This is what humans do. I’ve done it! But it didn’t get me what I wanted. At all.

What I was doing was reinforcing something about my husband that I didn’t want to be experiencing. I was affirming the negative behavior–the one that was bugging me.

Here’s the simple fix: Since nobody’s behavior is all black or white, you could decide to focus on what your partner is doing right.

Maybe you are married to a slob, but if you wait to catch him taking his plate to the sink you could say, “You’re so good about cleaning up!” Catching him doing something good and affirming that is one way to have a completely different experience.

It might feel like a stretch, but so what? What you focus on increases. Why not choose your focus about your spouse intentionally to match what you prefer?

My student Sage’s husband drank too much, which had been a source of conflict for them for decades, even leading to a separation. Her unwitting Spouse-Fulfilling Prophecy was “You drink too much.”

She decided she had nothing to lose by trying a Spouse-Fulfilling Prophecy experiment, so she looked for evidence that he was a moderate drinker–even though that felt like a stretch–so she could thank him for it.

She found evidence that he didn’t drink as much as some of their friends and that he never drank and drove, but she was nervous to say it to him.

When she finally did, he looked at her like she finally got him. So she kept it up and now she says his drinking is no longer a problem.

He even says about himself now, “I only drink moderately.” She was amazed to hear her words back to her and see him end his drinking early.

If your man is drinking more to cope with quarantine–or engaging in any other negative behavior–you might want to create a positive Spouse-Fulfilling Prophecy for him instead of a negative one.

People tend to live up to your expectations for them, so why not experiment with expecting the best?

Mistake #3: You’re Being Too Helpful

Coronavirus is scary! There’s disease and death in the news every day and financial insecurity from job loss everywhere.

One of the ways that people cope with fear is by trying to control.

You’re spending so much time together. You’re feeling anxious about everything. That’s a recipe that could cause anybody to become controlling.

You’re just telling your spouse how to cut an onion to help them do it better.

You’re just helping to remind them that they should eat more vegetables or take their vitamins so they’ll be healthier and have better immunity to the virus.

You’re just advising them on how to talk to their boss to be supportive.

You’re just reminding them it’s better to file for unemployment now than to procrastinate.

So there you are being what you see as “helpful” then your partner is defensive and you can’t understand why.

Being “helpful” is just a euphemism for control, and nobody wants to feel controlled.

There’s an underlying criticism when you’re telling your partner how to do something, like they don’t know how to do it themselves or they won’t do a good job.

It’s bound to cause some conflict when your partner thinks you’re criticizing their abilities or judgment.

The cheat phrase that you can rely on if you find yourself falling into this very common temptation to control is the phrase “whatever you think.”

Let’s say your partner is talking out loud about whether they’re going to do a home workout or go for a walk outside and you think they should stay inside. You can demonstrate that you trust them to make good decisions by saying “Whatever you think.”

You might be surprised at how well things turn out when you let him know you trust him.

One of my students, Shelly, decided to kick her control habit when her husband was considering a new job opportunity. She had a history of advising him, or “helping” him decide, which had caused a lot of fights in the past.

This time was different. He was telling her about how a headhunter had found him a job and she wanted to tell him it wasn’t a good idea, but instead she decided just to listen.

When he asked what she thought he should do, she said, “Whatever you think,” even though it was scary. She was amazed that after a few minutes of talking to her about it, he made the decision on his own to turn down the headhunter’s job!

No fighting. No tension. In fact, Shelly felt closer than ever to her husband and relieved of the burden of having to help him make a decision.

Coronavirus can put stress on your marriage. It might even be causing a breakdown, but crisis and opportunity travel together.

This could be the breakdown before the breakthrough in your marriage.

It might be the flashpoint that has you decide to study the 6 Intimacy Skills™ and practice choosing your faith over your fear so you can stop feeling stressed, exhausted and lonely and start feeling desired, taken care of and special.

A few months from now, you may look back and feel happy, accomplished and proud of how you used the time to create the very outcome you intended in your relationship.

Whatever challenges the recent events are bringing you, having a strong community of amazing women standing for your greatness will help you get through them while also being your best self.

5 thoughts on “How Does Quarantine Affect Your Marriage?”