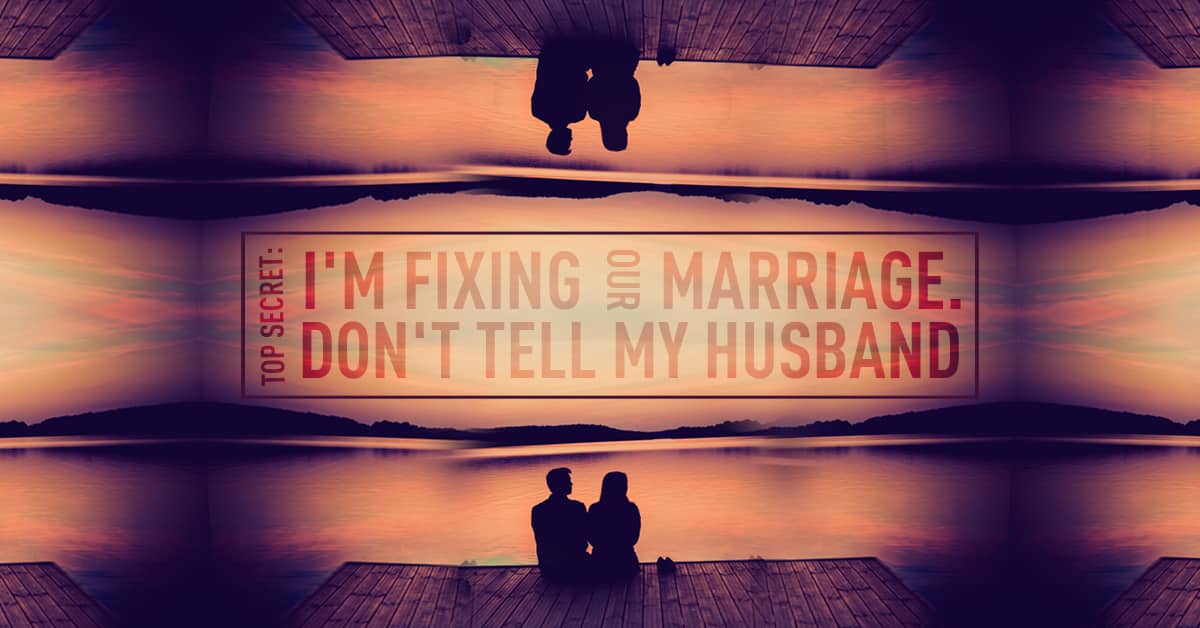 Should you ever come clean about what you’re doing behind his back?

I got a great note from Theresa, who just read The Empowered Wife and got—really got—that the marriage problems she has been griping about and wanting her husband to change for years are mostly things she has been mucking up herself.

She wanted to do the experiments in the book without having her husband see it and ask her about it, so she quickly made a book cover to hide the title.

Mostly, she was afraid he’d read it and see where she was going wrong, and say, “I told you so!”

That’s pretty unlikely, in my experience. As you begin to implement The Intimacy Skills, husbands get happy and chivalrous––not vindictive and obnoxious.

But there was a problem.

Theresa wanted to make a trek to California to spend three glorious days at the Cherished for Life Weekend getting immersed in The Six Intimacy Skills and being The Goddess of Fun and Light.

How, she wondered, could she do that without letting the cat out of the bag about what she was doing?

How does anybody get a coach, pay for training or come to the retreat without having her husband find out way too much?

Of course it involves using one of the Intimacy Skills, which I’ll show you.

But why is all of this so hush-hush to begin with?

Why We Do This on the Down Low

I do recommend keeping mum when you first start practicing The Six Intimacy Skills, as Theresa was doing, for two reasons:

What He Knows Won’t Hurt You

Is it absolutely vital that your husband never ever find out about what you’re doing when you start practicing The Six Intimacy Skills? Will it ruin your chances of becoming desired, cherished and adored if he finds out the details?

Definitely not. I even know of husbands who bought and read one of my books before giving it to their wives.

But that doesn’t stand between them and getting to the part where they’re grossing out their kids because they’ve become so physically affectionate.

But unless there’s a pressing reason to bring it up, you might as well enjoy the two advantages of keeping it secret––especially at first.

Eventually, most of our husbands find out. Typically, they smile. Or like this awesome husband, who was on the Man Panel at the Cherished for Life Weekend, they get choked up:  Watch Here

So what should you do if you want the privacy but you also want to go further than just reading a book, like Theresa?

Other women have the same problem when they want to enroll in one of my training programs or get a private coach. They have to run the expense past their husband, or ask for his help with the kids at certain times.

If you’re from a long line of oversharers like me, then he’s going to find out everything when you volunteer it.

But here’s another approach: You could also express a desire in a way that inspires him and let him ask questions from there.

It would look like this: “There’s a women’s retreat in California I would love to go to. What do you think?”

That’s it. Nothing else is needed.

He might ask a question about it, but get this: Most husbands don’t.

The headline for them is, “I could make my wife happy if she gets to go to this retreat.” That’s what they walk away with.

Whether it’s three days of Zumba or meditation or vegan cooking—it’s all the same to them if it’s something you would love. Most husbands are smart enough to catch on that what you’re wanting is going to benefit him too.

The guy from the man panel above said, “I don’t know what you’re doing here, but keep doing it.”

If your husband does ask what it’s about, you could say, “I’m going to learn how to be more respectful to you.”

If you want to say more, you can. But less is definitely more in my experience.

Over and over again, we get emails like this one that came today from a woman in Portland:, “I am ready to take you up on your offer to join your online group and come to your retreat. I did what you said in telling my husband (very little) about it and it worked.”