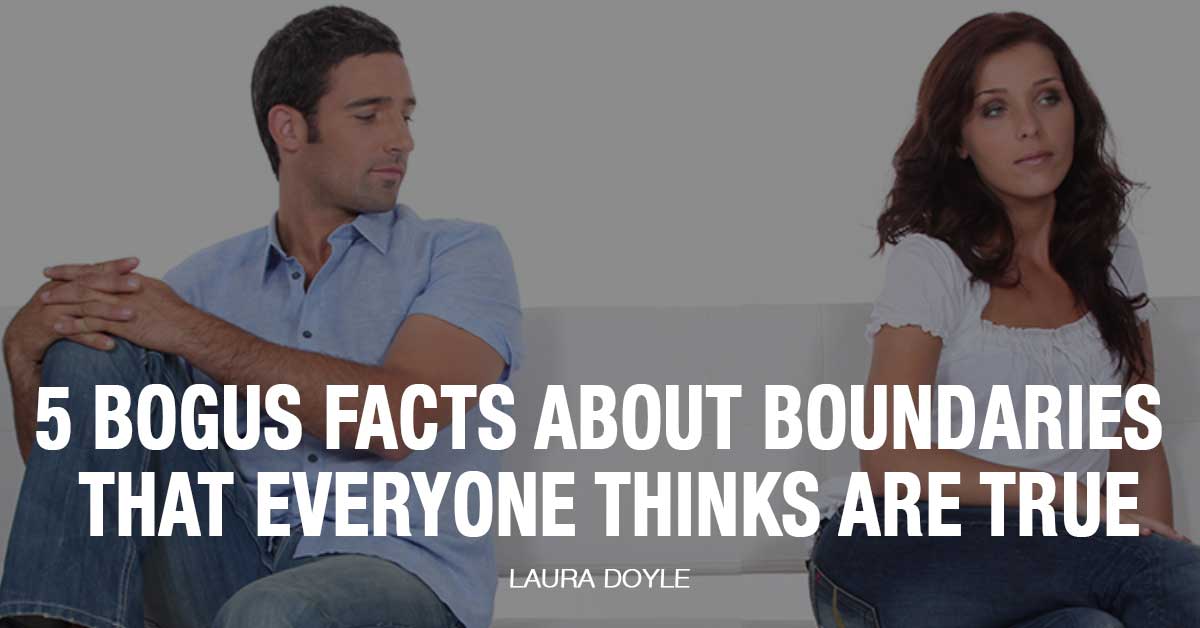 5 Bogus Facts about Boundaries that Everyone Thinks Are True

You have to set boundaries in relationships.

But what if you don’t?

Since boundaries are places at the edge of countries where soldiers with guns stand to defend their territory, you’ve gotta ask yourself: Do I really want those in my marriage?

Barbed wire and gun turrets don’t do much for intimacy.

You might be thinking, “That’s a different kind of boundary,” but in my early marriage there wasn’t much difference. I meet lots of other women who are as confused as I was.

They say, “I set a boundary. I let him know it’s not okay to stay out late drinking with his friends and leave me at home alone with the kids.”

Or, “I told him he had to end his friendship with that woman at work because that was violating my boundary.”

Or, as I used to say, “I don’t appreciate being spoken to that way and I won’t accept you violating my boundary.”

Of course, I want to honor myself. I want to say how I’m feeling and what I want. I want to feel important and desired.

I want to be treated well.

Today I have all that in my marriage. But setting boundaries never helped me get there.

In the bad old days when I was setting a boundary, it came out of feeling angry (or if I’m more honest, I was actually hurt) and therefore, by the time I got around to speaking my truth, it came out laced with sarcasm, criticism and resentment.

For example, if I said, “I don’t appreciate being spoken to that way and I won’t accept you violating my boundary,” that included a pretty loud subtext that he was a jerk and he had just ticked me right off.

I was a big, fat hypocrite who was criticizing him for being critical and blaming him for blaming me.

That pretty much guaranteed that I wasn’t going to get a good response, like an apology or a hug, because that’s not how human beings are made.

Even if you’re married to a Congressional Medal of Honor recipient, I promise he would rather run into enemy fire than try to hug you when you’re on the warpath.

When I feel criticized I get defensive, and that’s true no matter how right the other person is. It stands to reason that my husband reacts the same way.

Criticism has never improved our relationship. Not a single time.

Therefore, to teach someone else how to treat me and still preserve the intimacy I value so much, I speak only for myself and avoid criticizing him.

One way to do that in this example would be simply to say “Ouch!” and nothing more. I’m honoring myself by admitting I’m hurt but not criticizing or blaming my husband.

It takes some getting used to, but the response is so much better than I ever got from “setting a boundary.”

2. Boundaries are a Way to Take Care of Yourself.

Another common pothole I used to fall into a lot was taking on my husband’s problems as my own, instead of trusting him to figure things out himself (as he had for 32 years before I met him).

This resulted in me applying myself to things that were not my concern or my area of expertise, even though they exhausted and stressed me out.

For example, I took it upon myself to help him find a better job, which meant I appointed myself his career counselor, redid his resume and (you’re welcome!) found job leads for him.

When he didn’t appreciate any of that, I was upset!

I set a boundary by saying, “Well you can just do all of this by yourself without my help then because you don’t appreciate anything I do.”

In retrospect, I’m sure he was relieved! Except for the part where I explained what a jerk he was for not thanking me profusely.

As you can imagine, that didn’t exactly make him feel lovey-dovey toward me.

These days I stay out of that kind of trouble by minding my own business in the first place. That saves me from having lots of completely unnecessary resentment.

If nobody asks me for help, then that means they don’t need or want help. If they did, they would tell me.

Even if they’re hinting about it, I don’t have to read anything into that, and I typically don’t.

That’s because I trust that other people are the experts on their own lives and can speak for themselves when they want something from me. That includes my husband.

I listen and even sympathize at times, but I stay away from putting myself in charge of solving my husband’s problems unless he asks directly, and sometimes even then I use a magical phrase to stay out of trouble.

What is that phrase, you wonder? Glad you asked…

3. You Shouldn’t Let Your Boundaries Get Crossed.

If you think of your own limits as a mere mortal woman (instead of gun turrets), and if you think of acknowledging those limits before you’ve exceeded them—not after—then this one is actually true.

In the old days, deciding that my husband had crossed my boundaries was license to rip into him.

But in retrospect, there could be only one person truly responsible when I was overwrought, depleted or otherwise bent out of shape because my limits had been violated: me.

I’m the one who sold myself down the river by staying up too late to take him to the airport, or getting too lonely because I was waiting for him to come home when he was out with a friend, or working too hard to pay all the bills that I feared he couldn’t handle.

These days I’m pretty good at asking myself if I’m going to be resentful before I do something, and that serves me very well.

If anyone asks me to do something that will leave me overwrought, depleted or bent out of shape, I respond with this magical phrase: “I can’t.”

Being brave enough to disappoint my husband at times is worthwhile because it helps me keep my dignity, stay pleasant most of the time and avoid a blowup.

It bears repeating: If I go past my limits and my husband happens to be in the vicinity when I decide to overdraw my energy account, getting angry at him won’t somehow restore my self-respect.

But acknowledging my limits to myself up front has been a lifesaver and a marriage saver.

4. Boundaries Make Others Straighten Up.

This one just isn’t my experience—not the way I used boundaries or the way I see other women using them, which is as a way to try to control someone else.

That’s because boundaries are secretly ultimatums or threats. It’s human nature to rebel against an ultimatum or a threat.

Being threatened brings out the “I’ll show you!” in all of us.

I remember thinking that if I made threats it would make my husband realize just how thoughtless he was being and reconsider his actions, but that never ever worked, not even one little bit.

It didn’t protect me from suffering what I felt was his bad behavior.

Me putting him on notice just gave us wall-to-wall hostility.

These days I don’t feel at all tempted to make threats or ultimatums because my husband is inspired to make me happy.

All I have to do is be my best self (the me I always wanted to be anyway), and my husband responds to me better.

Boundaries often end up being things like “I’m letting you know right now I’m never going to your brother’s house again” or “Next time you need a ride to the airport, don’t ask me.”

But those kinds of announcements—the kind that are from now on and forever—are just sideways forms of saying “I hate you right now.”

They may feel good in the moment, but they leave little room for the possibility that you’ll feel differently about something in the future.

They certainly aren’t conducive to intimacy, as they tend to leave a cold frost in the room.

I notice that my relationship requires ongoing negotiations, and there are very few things that I can decide about now and forever.

Instead, I prefer to check with myself in each moment and decide if I’ll go to his brother’s house or drive him to the airport.

Maybe I will, or maybe I can’t do that and still be my best self—the calm, self-possessed one. Not the angry and resentful one.

Either way, I know I’ll be able to honor myself as that situation arises. And I won’t need a strong military to do it.

It’s true that we’re always teaching people how to treat us.

Setting boundaries never got me the tender, playful, passionate treatment I have now. But focusing on and honoring my own feelings and desires have helped give me everything I wanted when I thought I needed all that defense.

34 thoughts on “Healthy Boundaries in Relationships”