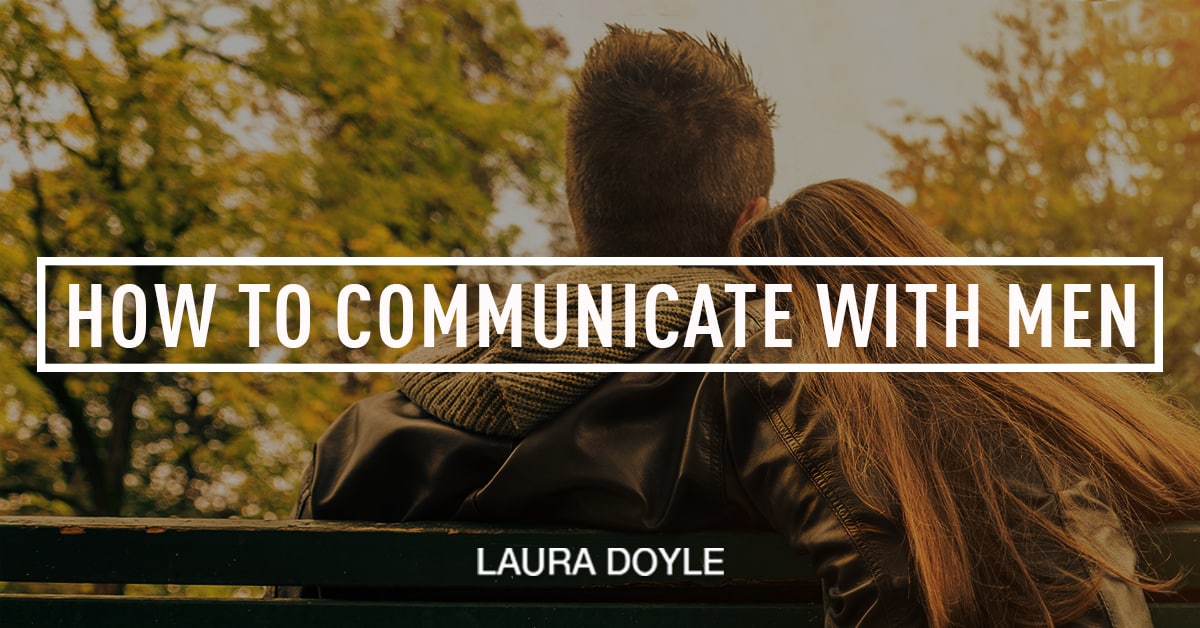 How to Communicate with Men

Everybody knows communication is the key to a good relationship. That’s obvious.

But what if it isn’t?

I’m a good talker. I started talking early, and I never really shut up.

Growing up, my sport was Scrabble. I even majored in communication in college.

So when there were big problems in my marriage just a few years in, I knew it wasn’t me who wasn’t communicating properly.

The problem was clearly him. I noticed he didn’t even like to communicate. He didn’t listen, and he didn’t want to talk.

When I asked him how he felt, he said, “Hungry.”

That’s when I realized I was in for a long “’til-death-do-us-part.” Divorce started to sound pretty tempting.

Miraculously, I then learned a few things about communication that they never taught me in school. And the funny thing is that after I learned them, my husband became a much better communicator.

Here are the 5 life hacks for communicating with men so they hear and get you: Click To Tweet

1. Stop Communicating With Him

When I heard that communication was the key to a happy relationship, I thought that meant that my husband and I should talk a lot.

And if some talking wasn’t doing the trick, that meant more talking would definitely be called for.

But that never worked. We spent endless hours on the couch communicating, and that never got me what I wanted–which was to know that he loved me like crazy and thought I was beautiful and special and amazing.

But the conversation never, ever got to that. Instead, they were painful, annoying, and relentless attempts to get him to see things my way.

I’ve since discovered that saying very little is a much better alternative to that kind of communicating.

I’m not talking about a cold war, where you just don’t speak and he knows you’re mad at him. I mean just deciding to let it ride for now, and maybe sleep on it and talk about it later if it still seems important.

I’m talking about leaving State of The Union addresses to the President, and saying what you want in short, little, teeny sentences.

Now, I know there is never a need for a long conversation to hash things out. We haven’t had one in over a decade.

The quicker way to get to the outcome I want (intimacy, passion, and peace) is to put metaphorical duct tape over my mouth until I can formulate a simple sentence about what I want, or issue an apology for criticizing him, or get some rest and perspective.

In other words, saying nothing is a much better choice than pummeling my husband under the guise of “communicating.”

2. Talk to Your BFFs Instead

What does talking to your girlfriends have to do with communicating with men?

For one thing, it’s a great place to go with a problem that might hurt the intimacy if you communicate it to him. Like, I might say to my sister, “My husband’s office is so messy, it’s really driving me bananas!”

And she can remind me that I can close the door so I don’t have to see it.

But if I say to my husband, “Your office is so messy, it’s driving me bananas!” I’ve just criticized him, and that hurts the intimacy.

You might be thinking, “But what if it’s true!”

But speaking that kind of truth just makes me a porcupine wife who is prickly to be around, and that’s not worth the price of admission.

My husband already knows if his office is messy. He doesn’t need me to tell him.

But that’s not the only reason talking to my BFFs helps me communicate with my husband. It also just helps me get all my words out. And it makes me happy.

Remember how I haven’t shut up, pretty much since birth?

Sometimes I give my husband a break by talking to someone else for a while. He seems to appreciate that.

3. Say What You Want

When we haven’t had to sit on the couch to “talk” (read: fight) for an hour and I’m in a good mood from chatting with my BFFs, the atmosphere around here is great.

One way to ruin that in a hurry is by complaining.

Unfortunately, complaining is not an effective way to communicate with men. They can’t even hear you when you’re complaining, as far as I can tell.

Using this skill instead is like magic for communicating with men in my experience, because they not only hear you, they get all motivated to make it happen.

That skill is telling him what you want, instead of going on and on about how you can’t live like this for one more second.

So complaining would be, “There’s no room on the digital recorder for the new season of Fixer Upper, and it’s because it’s all clogged up with other shows that we’re never going to watch.”

Saying what I want would be, “I want some space to record the new season of Fixer Upper.”

See the difference? Now he knows what to do to make me happy: make some space for my show!

And my husband, like all husbands, wants to make his wife happy.

Men need respect like they need oxygen. Just like I want to be desired and adored, my husband wants to know I think he’s capable and competent.

And when people don’t feel loved, they get defensive. And when they’re defensive, they seem like jerks, and that tends to ruin the good vibrations.

Therefore, when he thinks something completely different from what I think–like we should save the recording of The 10 Commandments from a couple of years ago because we might want to watch it later–I can either argue with him by saying that if we haven’t watched it in all this time, it seems unlikely that we ever will, or I could just say, “Whatever you think.”

As long as I have room to record Fixer Upper, what do I care?

I just saved myself an argument and gave him the respect for his thinking that he craves and deserves.

The longer I’m married (nearly 27 years now), the more I think humor might be the answer to every problem.

I’ve learned from my husband that when one of us is struggling to put up the curtains, and they slide completely off the rod onto the floor–the best thing to say is, “Hey, quit messing around!”

I think he got that from his heroes, the Three Stooges. Now he’s got me saying it too.

That beats, “Hey, watch what you’re doing!” every time for keeping the air clear and the connection strong.

One great way to communicate and still keep the connection strong is by keeping it light.

Referencing inside jokes, making silly faces, cutting the Quaker Oats man’s picture off the box and leaving him hidden around the house for the other person to find, splashing him at the sink–all of that is a good way to communicate with a man.

The message will come through loud and clear: I’m happy and confident in this relationship, and I’m glad I’m in it with you.

That’s one of the best messages a man can hear from the woman he loves.

49 thoughts on “How to Communicate with Men”