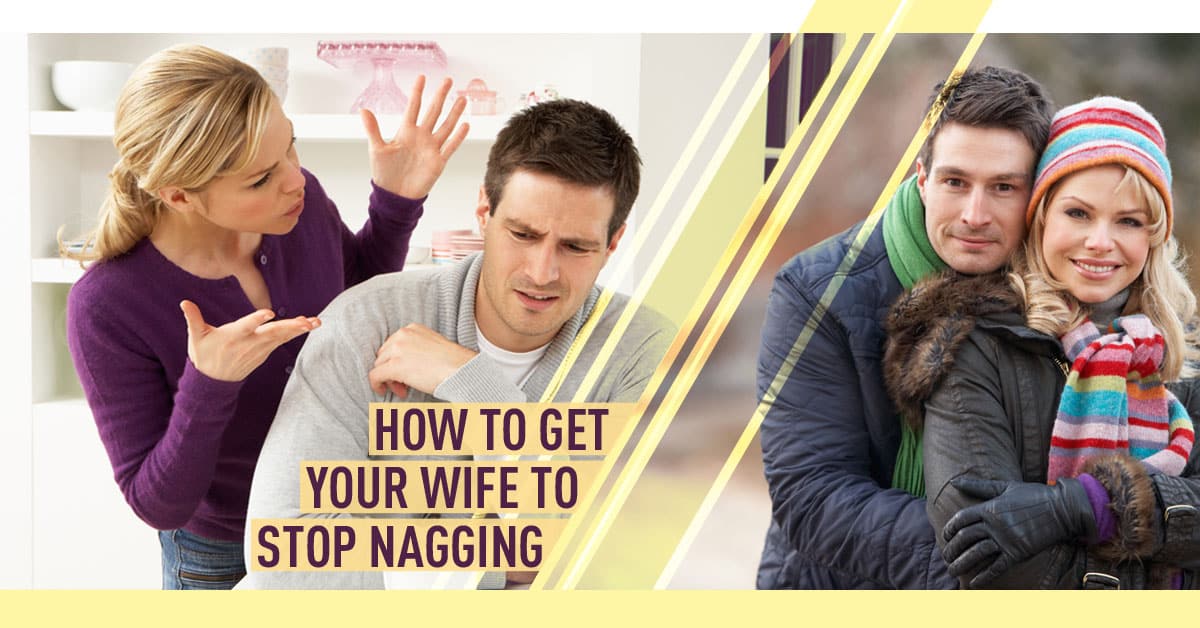 As a former nagging shrew, I can tell you that it’s not an enjoyable pastime. It took me a long time to even realize I was nagging. I felt soooo justified.

I was convinced that if I didn’t repeat myself and make lists for my husband and manage him, nothing would ever get done. When he didn’t respond well, I came back with even sharper and louder orders, which never worked.

Bad idea–I know. It really cost me my dignity and self-esteem, and it sure cost me intimacy and connection with my husband.

I didn’t like the sound of my own sarcasm and whining. It wasn’t attractive–even to me. I knew I was driving him away, and I was terrified I was going to end up alone if I didn’t stop.

Truth be told, I didn’t even want to be around myself because I sounded so screechy all the time.

Here’s the big, dark secret we naggers all have:

I was so overwhelmed and anxious I couldn’t relax. So I was tired most of the time and that made everything seem wrong and bad. So I tried to fix it…with more nagging.

You can see where this is headed.

It was just as miserable for me to be a nag as it was for my husband to be the naggee.

But for years, I had no idea how to stop.

What Doesn’t Work to Get Your Wife to Stop Nagging

You’ve probably tried telling your wife to relax and quit worrying so much because everything will be fine. You told her you loved her and you just want her to be happy. Maybe you said, “Just let it go.”

But that didn’t work. It never does. It’s not just you. That only makes things worse.

When you couldn’t take it anymore, maybe you told her to “Give it a rest,” or just, “Stop nagging me!” Perhaps you’ve said, “Get off my back!” or just turned up the volume on the TV and tuned her out.

That didn’t work either.

If it did, you wouldn’t be reading this blog.

I know you want her to know that if she would just stop nagging, you’d be able to do so much more to make her happy–just about anything, really.

You’d probably be buying her flowers, or cleaning the garage, or taking the kids out for the morning so she can sleep if she’d just give you a chance.

And yes–you’d probably like to watch the game in peace, or go golfing without feeling like a jerk for being gone all morning, or wear what you wanted to wear to the party.

In other words, everyone would be so much happier if she would just chill out and stop barking orders.

What Can a Husband Do?

All my books and blogs (with the exception of this one) are for women, but I get some heartbreaking emails from men wanting to know how to get their wives to read my book, and asking if I have a book for them too. They tell me they have two boys or three teenagers, and they’ve been married for decades and that things are grim. They’re searching for some way to shore up the relationship because they’re afraid the end is near.

Mostly the husbands who write to me want to know how to make their marriages peaceful again. Mostly that comes down to wanting to know how to get their wives to stop nagging.

I have a world-famous system that puts an end to nagging–as long as the wife comes to me asking for help with her relationship. Usually she is looking for help with getting her husband to change, which is a perfectly good starting point. If she wants to learn how to end the cycle of feeling like his mother and become his lover again, or awaken his natural desire to make her ridiculously happy again, we’re all good, because that’s what we do around here. That’s what we’re really good at.

Her husband does change just as soon as she starts using my Six Intimacy SkillsTM, even if he doesn’t know she’s using them. She changes and then he responds to her differently.

And by differently, I mean way, way better.

When a husband contacts me, wanting to know how to get his wife to change, that’s another story. Wives are the keepers of the relationships, so men don’t have as much power to improve them. But he does have the power to introduce her to books and training that change everything.

And by change everything, I mean make it way, way better.

My World-Famous System to Stop Nagging

I created a system that helped me stop nagging and controlling. It’s pretty simple, but it takes some focus to apply. Over 150,000 women all over the world in 16 languages and 27 countries have found it astonishingly effective. It will work for your wife too.

Now you’re wondering, how do I get my wife to use your system?

I’m going to tell you what’s worked for others so you can follow the same steps. Proceed with caution, as it’s a little tricky and there are some pitfalls, but it can absolutely be done. I’ve had women come and train with me at the highest level to become a relationship coach and transform their whole families after her husband introduced her to my work via a $16 book. She took it from there and ran with it.

As a husband, your goal is just to open the door and let her walk through if she wants to.

She Wants to Be Desired, Cherished and Adored Every Day

The goal is for her to become willing to read my book, The Empowered Wife: Six Surprising Secrets, for Attracting Your Husband’s Times, Attention and Affection. If you try to force it on her, she won’t ever be able to read it. Never, ever, ever. Just like you can’t get yourself to clean the garage after she tells you that you promised you would and asks when you’re going to start.

Human nature is contrary. We might as well acknowledge that before we start anything so you don’t make that door you’re trying to open impossible to walk through.

Also, nothing good is going to come of bringing this book up when she’s upset. The middle of a fight is not the time. And what you don’t want to say under any circumstance is, “You should read this book;” that would be controlling.

Once you do that, it’s game over. Might as well go back to getting nagged for not cleaning the garage.

Instead of Making a Suggestion or a Request, Create Curiosity

Buy a paperback copy of my book, The Empowered Wife: Six Surprising Secrets, for Attracting Your Husband’s Times, Attention and Affection. I suggest a paperback, even if you’re all ebooks at your house because what you want to do is create intrigue and for that, you’re going to need a visual, like a paperback.

Maybe my book The Surrendered Wife is the one that attracted your attention, but that title is hard for many women to accept (even though it’s NOT about being subservient or obedient, many people assume that it is).

Start reading The Empowered Wife around the house. Leave it folded open on the coffee table or by the bed where she might see it. Allow some time for her to comment or inquire about it. I suggest at least two months.

It’s really aimed at women, but one section I recommend also for men is page 75, Listening 101. You have my permission to start there and end there. The goal is really for your wife to read this book since it’s designed to show her how to use her strengths and gifts as a woman.

If she comments about the book in any way, consider saying something provocative but sincere about it (that won’t be hard because it is provocative).

For instance, you might say you heard about it on the radio or came across it on a blog, and that you found the premise surprising but spot-on. Or maybe counterintuitive, but compelling. Be sure to use your own words, but use words that will make her want to know more. You know your wife very well, so say what you think will pique her interest, and do your best to stay detached from the outcome.

You can invite her in further by saying, “I’m curious what you would think of it,” if you think it’s a good idea.

If two months go by and she hasn’t brought up the book and things don’t seem to be improving at your house, when she next complains about you or the relationship, I suggest you say something like this:

“I’m glad you brought that up. I want to improve our relationship too, so I looked for a book that could help and I found an interesting one–very different from most relationship advice. I’m not sure what you would think of it, or if you’re willing to read it. If there’s a book you want me to read, I’m open to that. We’re pretty smart and I bet we can improve things around here if we put our minds to it.”

That’s it–you’re done. If she runs with it, miracles will happen. If she doesn’t, then I know of nothing more you can do. Any further attempts will be like barring the door to the book with steel reinforcements. If you mention the book in an angry moment, you could create enormous resistance that could take years for her to overcome.

So mum’s the word. Let her find her own way, in her own time.

Some people will read this blog and say I’m encouraging manipulation, but a careful reading will demonstrate that everything in this blog is about speaking for yourself, which is the opposite of manipulation. It’s also about being considerate of human nature, and what makes people feel emotionally safe, which is a critical component of intimacy and connection. It’s about introducing new ideas in a thoughtful way.

I hope that you get that I’m passionate about supporting you and your wife having a great relationship, and getting all the blessings that come along with that.

I’ve wrestled with this question for over 15 years, because of heartbreaking emails from thousands of husbands who all wanted to know the same thing: “How do I get my wife to read your book?”

Once she reads the book, your wife may get quiet about what she’s doing (because that’s what I suggest). She doesn’t need to consult with you to practice the contents and create a breathtaking change in your home. You’ll know that something’s different.

And by different, I mean way, way better.

32 thoughts on “How to Get Your Wife to Stop Nagging”