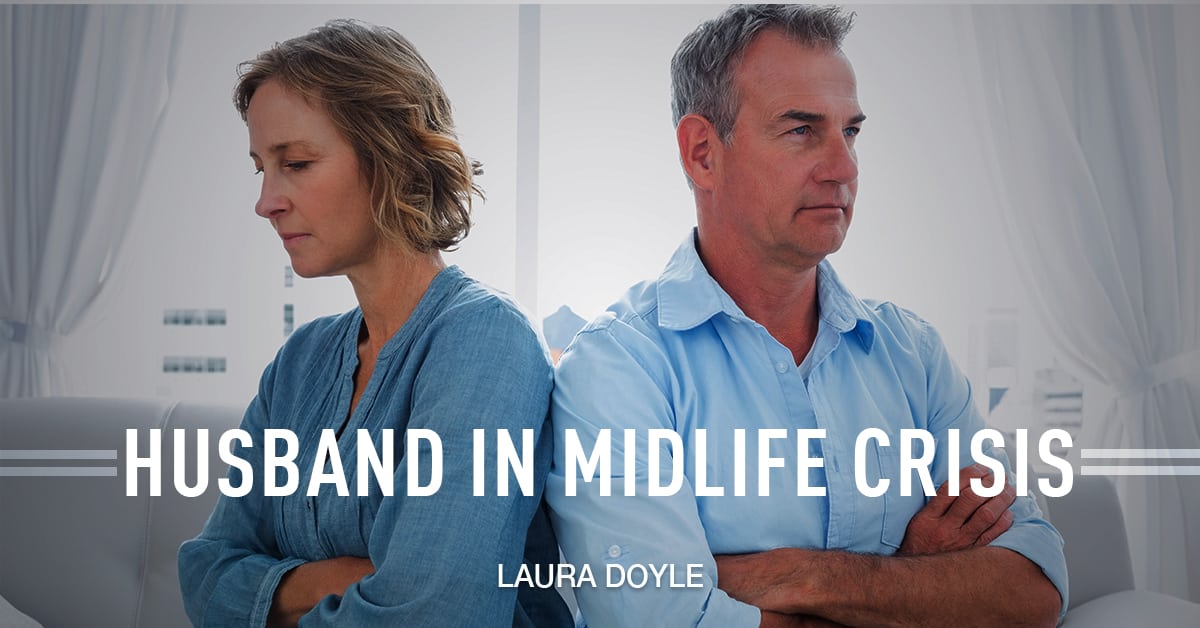 How to Keep Your Connection, Your Cool and Your Dignity

If you’ve ever experienced your husband taking what looks like a sudden turn off of family life lane and speeding down immature, selfish highway—possibly in a new sports car—then you’ve probably suspected him of having a midlife crisis.

Maybe he stopped telling you where he is, or suddenly isn’t coming home at the usual time.

Perhaps he complains that he’s disappointed with life, and wonders why he hasn’t gotten what he wanted.

He seems to be throwing away everything you’ve built together.

He’s grumpy, depressed, and suddenly irresponsible, which is making you furious.

No amount of talking to him is creating the desired effect, as he goes along on his self-absorbed way.

He may even be saying devastating things like, “I don’t love you anymore,” or, “I don’t know if I want to be in this marriage.” It’s painful.

You may even wonder if he’s also given up on his vows.

Unless you know what to do.

Here’s how to get back to the good times when your husband is having a midlife crisis. Click To Tweet

Is your husband really having a midlife crisis? Or could it be something else?

The reason I ask is because my husband exhibited many of the symptoms of a midlife crisis years ago, and that wasn’t the problem. At all.

The reason he was depressed and grumpy, distant and selfish had nothing to do with being in midlife.

The reason he quit both his job and the band we played in together on the same day (without breathing a word about it to me) was not because he had middle-age crazies.

It had to do with feeling like he never got what he wanted because—and this is the embarrassing part—I rarely let him do what he wanted.

Of course, he’s a grown man, so I couldn’t stop him from doing what he wanted.

But I often tried to get him to do what I wanted instead.

I’d explain why he should go to the store while he was already out instead of making a special trip because it’s more efficient. Or ask him why he wanted to get his friend a Christmas present when his friend didn’t get him one last year. Or tell him not to order Coke at dinner because it’s such a rip-off at restaurants.

It made sense to me to try to teach him how to do things when I knew better, but as it turned out, there were a lot of things I thought I knew how to do better than him.

At first it was irritating, but over time it became unbearable, and that’s when it seemed like he really flipped out.

He seemed like a different person than the guy I married. He was angry, contrary and uncooperative. He wasn’t willing to listen to reason, from my perspective.

Turns out he was just tired of being nagged, nit-picked and micromanaged.

My husband wasn’t having a midlife crisis at all.

He just had a chronic case of critical, controlling wife-itis.

The heart message behind a midlife crisis is a man saying, “I want control over my own life and decisions.”

From my point of view, that seemed hostile and uncaring. What about what I wanted him to do?

But he’d been bending as far as he could for a long time, and one day he didn’t want to bend anymore. He wanted to be his own man, and have the autonomy that all men crave.

Looking back, I can’t say I blame him. But at the time, I blamed him for all our problems.

I believed that if he would just do what I was telling him to do, everything would be great.

But now I know better.

Let’s Not Both Make These Mistakes…

When I could no longer get the outcome I wanted by trying to persuade, cajole, beg or make demands of my husband, I felt heartbroken, betrayed and furious.

That still didn’t get him to respond any better.

I tried ultimatums, tears and threats of divorce.

That didn’t work, either.

The cold war raged on at our house.

I considered throwing in the towel.

I’m so glad I didn’t. I would have missed the most valuable lesson of my whole life AND the amazing marriage I have now.

How to Cure the Cold War

It wasn’t until I learned how to be respectful—and especially to relinquish the inappropriate control I thought I should have over his life—that there was a change in the climate.

The more I acted like I trusted him to make good decisions and swallowed my urge to tell him what those good decisions should be, the more he seemed like that responsible, devoted guy I fell in love with.

When I returned control of my husband’s life to its rightful owner, and acted like he was competent and capable—like I had when we fell in love—something magical happened.

The midlife crisis went away.

The thoughtful, considerate, unselfish man I’d married came back and was loving and sweet again. It seemed like a miracle, but now I’ve seen the same transformation happen for thousands of other women who followed the same steps.

And if I can do it, and they can too, then why not you?

When you do, his midlife crisis will disappear and the good man you fell for will return.

74 thoughts on “Husband in Midlife Crisis”