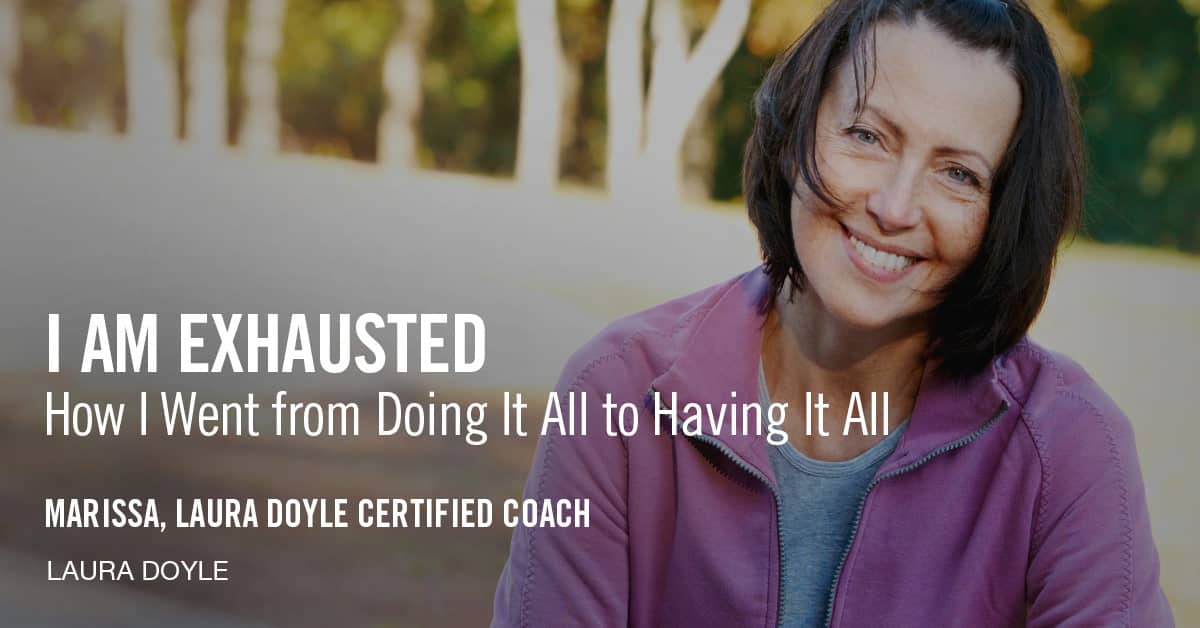 How I Went from Doing It All to Having It All
Marissa, Laura Doyle Certified Coach

If a diaper needed to be changed, I changed it. If a last-minute doctor visit was needed, I rearranged my schedule. If the house was dirty, I cleaned it.

I was exhausted from handling the majority of the childcare and household responsibilities.

I was also suffering from postpartum depression following the birth of my daughter. I’m certain that continuing to do so many things I really didn’t want to be doing contributed to my depression.

With depression, exhaustion and just plain misery oozing out of me, my husband became the enemy in my eyes.

It was ugly. He did very little to help and when he did, he did it wrong. I was so angry about having to do everything to keep up the house and care for our daughter.

I was clearly married to a misogynist and knew it was his mother’s fault for babying him and doing everything for him.

Here’s how I got my husband to step up and be the man I wanted so I could finally kick my feet up. Click To Tweet

Little did I know how big a part I was playing in my own unhappiness. I preferred to point the finger at him than to look at myself.

I decided to check out Laura Doyle’s then new book, now titled The Empowered Wife. It was eye-opening. I saw how I played a part in our failing marriage. I also realized I had the power to fix it.

When I saw my husband that evening, without explanation I gave him a big hug as my way of saying “I see so clearly now and I want to do better.”

This began my journey with the 6 Intimacy Skills™.

The Intimacy Skills made sense to me. Now that I had this information, I could no longer bury my head in the sand and continue to blame him for my unhappiness.

At first I found myself in what I call the “painfully aware” stage, seeing and hearing the effects of my disrespectful comments and continuous attempts to control him but catching them too late.

I’d criticize him for spending $2.25 on the toll road when it saved only one or two minutes, strike back when my feelings got hurt, or “help” him pay the car registration that I was convinced he’d forgotten about.

I slowly began implementing the Intimacy Skills and started feeling a difference in myself. I wouldn’t engage in negativity and instead applied my imaginary duct tape.

When he was in a bad mood one morning, instead of responding with my opinion on his negativity, I experimented with keeping my mouth shut. I allowed him to hear his own complaints about our flimsy bank account, his rebuttal of any idea I had, and his frustration with our four-year-old daughter being a four year old.

I was shocked when he caught himself and jokingly said, “Boy, I sure am fun to be around, aren’t I?”

I started experimenting with doing less–or doing nothing at all–when it came to household and parenting responsibilities. What would happen if I didn’t make my daughter lunch or help her in the bathroom the split second she said “I’m done” when both parents were available?

I owned that I was the one doing a lot of the parenting out of fear of something bad happening if I didn’t.

When I stepped down, he stepped up.

This was a simple task but not always an easy one. I found myself having to sit on my hands to avoid jumping in, zipping my lips instead of telling him how to do it, or just leaving the room.

He may not serve lunch until 3 p.m. and it may take my daughter saying “I’m done” three times before he helped her in the bathroom, but it did get done.

I went from resenting him for not doing enough to showing appreciation for all that he was doing. I started saying thank you to him all the time. I would consciously look for ways I did appreciate him and let him know, such as thanking him for going to work every day and supporting our family. I noticed more thank you’s came back to me from him, which felt so good.

I apologized for being disrespectful without a follow up of “but you…” and felt proud of how I was showing up in our marriage.

This journey started with the book, but it wasn’t until I began Laura Doyle Relationship Coach Training and received support from other women on the same path that real change occurred. It was like taking a trip and having someone beside you with the map guiding you to your destination.

That’s when the magic began! My husband started appreciating me more. He would apologize when he felt he had done something wrong. He became the man I’d wanted! I was the one surrendering, and he stepped up in more ways than I could ever have imagined.

At first it was practical ways (that I was just giddy over), like taking the trash out, washing dishes, and taking care of our daughter. I could just relax and put my feet up.

Then it was handling the finances, helping me with my dream of starting my own business, noticing me and complimenting how I looked, and initiating romantic lovemaking that we hadn’t shared in a long time.

What’s stopping you from having it all?

1 thought on “I Am Exhausted”