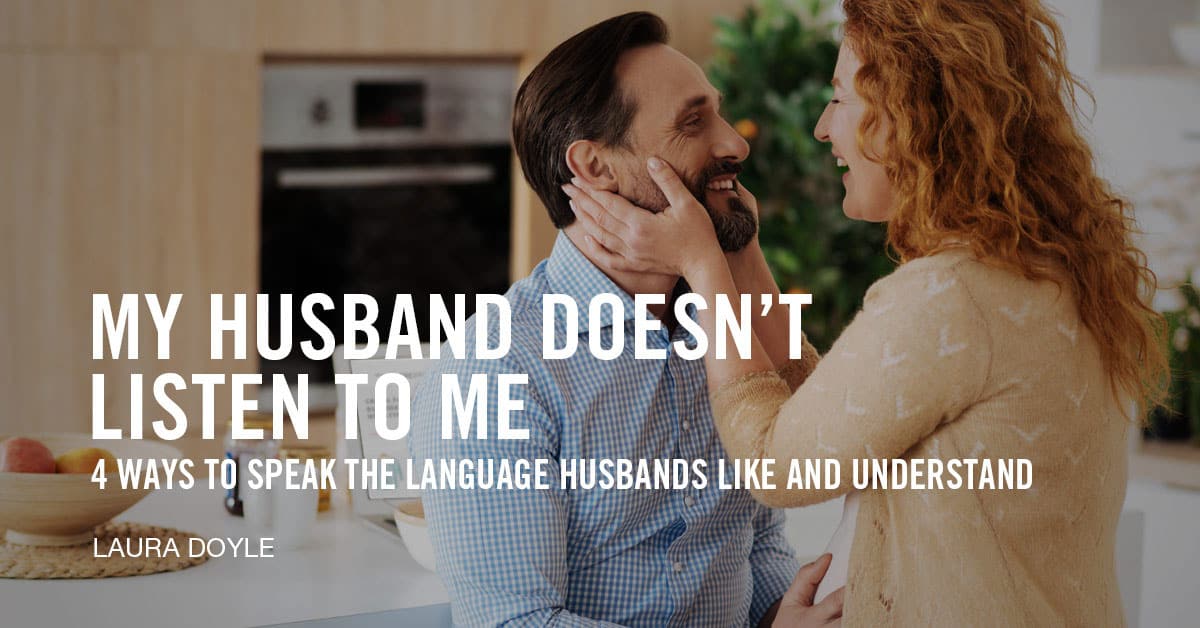 My Husband Doesn’t Listen to Me

4 Ways to Speak the Language Husbands Like and Understand

Having the same conversation again and again, the one that turns into an argument or a cold war every time, gets old fast.

But when your husband isn’t holding up his end of the parenting, finances or household maintenance, you end up stuck holding the bag, which is exhausting.

You’re likely to get resentful if you don’t say something, but what if he gets irritable whenever you mention a particular topic?

Or, what if every time you bring it up, it isn’t a good time? What if he just won’t listen?

If he’ll never talk about it, how will things ever get better?

It can make you feel hopeless.

One man told me his wife complained that he woke her up by munching on potato chips in the car while he drove the family back from a long weekend in the mountains.

“I thought I was doing a good thing, taking the family on vacation and driving everybody back while they rested. But I didn’t feel appreciated. She only noticed that I eat chips too loudly.”

Another husband told me recently that he used to clean the kitchen but has stopped because his wife never acknowledged that he did it. “She never said anything, so it was like it never happened.”

You might be thinking, “I clean the kitchen every day, and no one thanks me either!”

You’d probably like someone to notice and acknowledge your efforts. That’s human.

To have a culture of gratitude in your marriage, why not go first?

You can thank him for ordinary things like making the coffee, putting the kids to bed or putting on a new roll of paper towels. And for big things like supporting the family or his character traits–like being fun-loving and generous.

When he feels appreciated, he feels successful in being your hero, which inspires him to want to listen to you because what you’re saying makes him feel good.

As one guy on the man panel at The Cherished for Life Weekend put it, “My wife was so grateful that I fixed the cabinet that I started thinking, ‘What can I break around here so I can fix that too?’”

Of course, you don’t have to say “thank you” to him to make him listen, but when you want him to be open, that’s a great time to look around appreciatively at what you already have, thanks to him.

2. Ask to Borrow His Brain

Announcing that you want to talk is the same as saying, “You’re in trouble and I want to complain about you.”

There’s a conversation nobody wants to have.

Most husbands will climb out the window or disappear into the floor to avoid that talk.

If you’re anything like me, you’re thinking, “But he’s not in trouble! I just want to discuss the budget and how we’re not banking any money for a vacation.”

But right there, hidden in your agenda, is a complaint: You spend too much/don’t save enough/don’t make enough.

And your husband is highly sensitive that you think he’s falling short. Your disappointment in him is pretty crushing, actually.

At least it was for my husband and for every man I’ve ever spoken to about this.

Looking back, I can see why my husband retreated to the TV so he didn’t have to continuously be reminded about how he wasn’t making me happy.

From his standpoint he was already doing his best, so my complaining didn’t motivate him to improve–or to listen to me. He avoided the pain of that conversation completely.

But if you figure out what it is you want and ask if you can “borrow his brain” about something, you can engage him in solving your problem, which he loves to do.

For example, you could say, “Can I borrow your brain? I want to figure out a pretty backdrop for my next video and I’m stuck! Any ideas?”

I said that yesterday, and today we’re shooting a video with the great new set design he came up with.

3. Express a Desire, Not a Complaint

Husbands can’t even hear you when you’re complaining. I know this from my own experience of complaining for years and having my husband tune me out.

For example, in the old days I would have said how boring the plain old walls look as the backdrop for my videos.

He might listen politely, but he wouldn’t know what to do for me. He might think I needed a nap.

Double-check to make sure you’re expressing a pure desire–meaning no manipulation, control or complaint–when you talk to your husband. Just think of the final outcome you want and stick to that.

It’s so easy for complaints to sneak in! That happens to me too sometimes.

I was tempted to say, “I’m sick of these plain old walls as the backdrop for my videos, but I can’t use the windows because I look dark when I’m backlit, so argh!”

There’s no indication of what I wanted in that, which is the critical information my husband needs in order to make me happy.

If your husband is anything like mine, that kind of complaint will only have him tune you out again. So i just said it to myself and figured out what I wanted before speaking to him.

It’s not fun to listen to complaining to begin with, but when he can’t figure out how to help you he isn’t likely to tilt his head and say, “Tell me more!”

More likely he’ll search for something more interesting to listen to, like the TV–unless he hears a way to be your hero and do something that will make you happy, that is.

One woman was astonished though, that when she simply said, “I would love a glass of wine!” without any expectations that within minutes her husband was on the way to the store to get her some.

That’s the power of expressing your desires in a way that inspires.

It’s tempting to go into a long story about why you’re thinking about whatever it is you want help with and what happened before and what your sister said and lots of other details.

If you want to express your desires in a way that inspires, consider keeping it short and sweet.

Once you’ve expressed your appreciation for something he does and figured out what it is you want, construct one brief sentence so it looks like this:

“I’m so grateful you put our son to bed every night. Can I borrow your brain about something? I’d love for him to clean his room, but it is not happening. What do you think?”

Then you can stop and listen to what he has to say. I promise he won’t try to jump out the window this time.

As far as whether to go along with his suggestions, that’s up to you. You could continue to refine your desire as you go along. So if he says, “Okay, I’ll tell him I’ll take him for ice cream after he cleans it,” and you worry about your son having sugar or a reward for doing his part, you can always say, “I’d love to get into a routine that doesn’t end with sweets.”

“Thanks for going to work every day to support us. Can I borrow your brain about something? I’d love to figure out some way for my mom to stay with us comfortably when she comes to visit.”

You might be surprised just how attentively and thoughtfully your husband listens when you use these techniques.

What would you like to talk to your husband about using this approach?

39 thoughts on “My Husband Doesn’t Listen to Me”