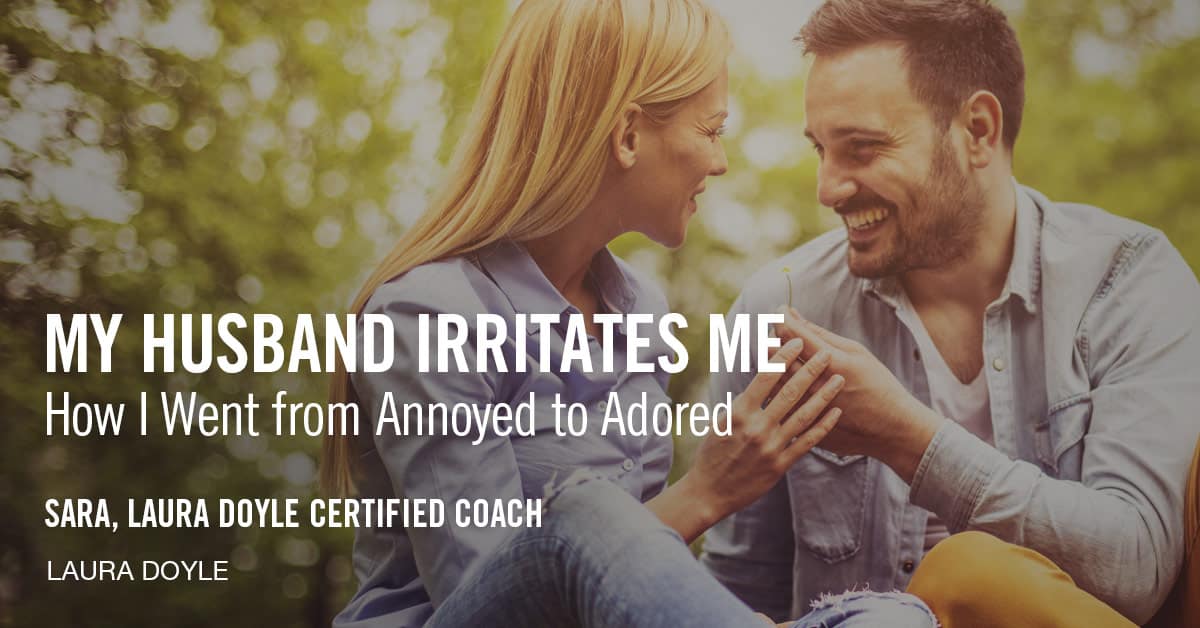 My Husband Irritates Me

How I Went from Annoyed to Adored
Sara, Laura Doyle Certified Coach

I had a hard time talking with my husband from the beginning.

Sitting in the lobby of some hotel, I would feel stifled at his choice of topics for conversation. I felt pressured to read up before we met so that I would look at least somewhat intelligent.

I’d also be annoyed that when the taxi driver didn’t give him change, he would just let it go.

However, I saw that he was sensitive, gentle, good-looking, and very smart.

We got married about five months after we met, and I was a nervous wreck. I wasn’t sure if I liked or respected him that much, but I was afraid that no one else out there
would want me.

As a newlywed, my husband was always thinking of ways to delight me, like bringing home an ice cream cone for us to share. Still, I would be annoyed. Didn’t he know I was trying to diet?!

Here’s how I turned my annoying husband into one who adores me--a feeling that’s now mutual. Click To Tweet

He would prepare a little scavenger hunt with notes hanging from the ceiling or tucked under pillows that led me to the fridge, where he’d hidden a heart he had carved out of a watermelon.

I had been looking forward to eating that watermelon–I was pregnant for goodness’ sakes–and now he had butchered it into a nauseating mess.

He also bought me flowers every week. Beautiful, big bouquets of flowers. I was so nervous receiving them, thinking he’s just bringing me flowers out of a sense of duty, like it’s the thing to do.

And besides, flowers are so expensive! We were on a tight budget with him still studying and me job hopping, filling whatever positions I could find. And my parents were paying our rent!

“I don’t need flowers every week,” I told him. “We can use the money for other things.”

So he started showering me with flowers on cards instead. I’d smile and secretly roll my eyes. His messages were so kinky! Pretty much the same variations week after week. No surprises there.

One time I came home and was thrilled to find candles leading to our bedroom, with flower petals strewn all along the path. He was waiting for me by the door when it opened.

I enjoyed that but suggested that it was a shame to destroy such beautiful flowers; maybe next time he could use fake flower petals.

There actually was a next time, with fake flower petals, but somehow neither of us enjoyed it that much… And he never used them again.

Soon the treats, flowers and cards trickled to a stop.

We had babies in quick succession, which brought a whole slew of new joys and challenges into our lives, including financial difficulties. My husband had a job, but it was pretty minimal, and I would literally ration our water.

I tried working from home or part time. I was exhausted if I tried to work, bored and overwhelmed if I didn’t.

It didn’t help that I was the only one with a driver’s license. I was responsible for driving him around, and I white knuckled it through his driving practice.

Even when he finally got his license (which I couldn’t believe the instructor had actually granted), I always felt insecure in his car. I actually preferred my teenage brother at the wheel over my husband if we had to go a long distance.

I was very concerned that he didn’t know how to take care of our children properly either. I showed him how to hold the babies, diaper them, and what they could eat. I organized routines and schedules for my little brood, taking them on trips to the park or the supermarket myself.

I rarely left them with him, and when I did, I felt I always had to pay for it later with his frustration at being with the kids for “so long.”

My husband worked until 2:30 in the afternoon, and that was about it. He didn’t help me with bedtime or cleaning up–at all. He left his stuff everywhere. I’d literally follow him around and pick up his socks from the floor, his pants off the banister, his undershirt from the bathroom sink, his plate off the table.

I felt that my husband was another child I had to parent, and I was embarrassed of him.

I was so resentful. I criticized how quickly he wore his shoes out. I was afraid he was following in his father’s footsteps with the extra belly fat he was carrying around. I worried he wasn’t doing his job well, and I was just plain not attracted to him!

And then, after everything I had done for him–clean the house, do his laundry, organize his papers, cook his food, raise his children–he would complain that I didn’t respect him!

What more could he want of me?! I was such a good wife. I never complained when he often stayed away from home for hours at a time. (In fact, it was a bit of a relief not to have him around.) I was working so hard, yet I was still so supportive of his needs and how he spent his time!

Things peaked after the birth of our fifth child in 2012. My husband lost interest in me sexually, except maybe to do his thing, which left me feeling alone and angry.

We took a mini vacation, renting a cabin upstate. He couldn’t even look at me. I tried so hard to get his attention. I climbed up a rickety ladder to this little loft in the cabin and danced around, anything to get him to notice me.

Finally, out of desperation, I tore off my negligee and tossed it into the garbage. Without a backward glance, my husband took the garbage out to the dumpster.

I just exploded in pain. I couldn’t understand how he could be so self-centered, so oblivious and so cruel!

Something had to give.

We started therapy. I knew he needed it. I had grown up in a large, happy family, unlike him. His mother was neglectful, and his father died young from smoking and poor health. My husband had been in and out of therapy for a few years already, which I definitely supported.

He had a lot of issues to work through–that I knew.

But now we were in a whole other league. Individual counseling, marriage therapy, couples weekends, you name it. We flew out of state to one highly recommended psychologist, drove hours into the city for another, and spent thousands and thousands of dollars trying to unravel our marriage issues.

After the better sessions, I would feel a release, like I had finally gotten off my chest some of the things I’d been holding inside. After the the worst ones, my husband would sulk or blow up, and we wouldn’t talk to each other for a week until our next appointment.

None of them brought any sort of lasting peace, playfulness, passion, or intimacy. None helped me love and respect my husband more. None helped him desire or adore me.

Then, in 2015, I discovered Laura Doyle’s book The Surrendered Wife. Her story immediately resonated with me, but it was hard to implement her suggestions on my own. I had so many patterns that needed to be uncovered, so many habits that were so entrenched.

Besides, Laura often spoke about how amazing her husband was when they met. I’d never really felt that way about my husband. I wasn’t sure these 6 Intimacy Skills™ could do much to turn him around.

Eventually I placed the book back on my shelf, where it sat for another year or so. But it resurfaced again when a friend of mine started practicing the Intimacy Skills and encouraged me to take another look.

Well, this was the first time I saw that my lack of respect toward my husband was likely factoring into his seeming inability to discipline and love our children effectively.

It was the first time I’d heard that being a good wife doesn’t mean doing for my husband and that I would benefit better from receiving what he had to offer me.

It was the first time I noticed how controlling and resentful I was so much of the time.

I knew I needed more support. My friend and the books were not enough–I was hungry for more. I looked up Laura Doyle online and scheduled a Discovery Call. I wanted the most that they could offer, so when they said that was to be found in Laura Doyle Relationship Coach Training, I called my husband. He said, “Do it.”

It was life changing.

When I started respecting him, his whole energy changed. He became more masculine, and I loved the new strength he exuded. I began to enjoy being intimate with him and looked forward to his touch. I love the way he looks at me now.

I have discovered that my husband is a wonderful father. He is in charge of our children’s discipline, and I love it.

He helps me pick up around the house and puts the kids to bed. He takes full responsibility for our finances and provides wonderfully for us.

He is so loving and attentive to me and has forgiven me with an open heart. I am so grateful.

7 thoughts on “My Husband Irritates Me”