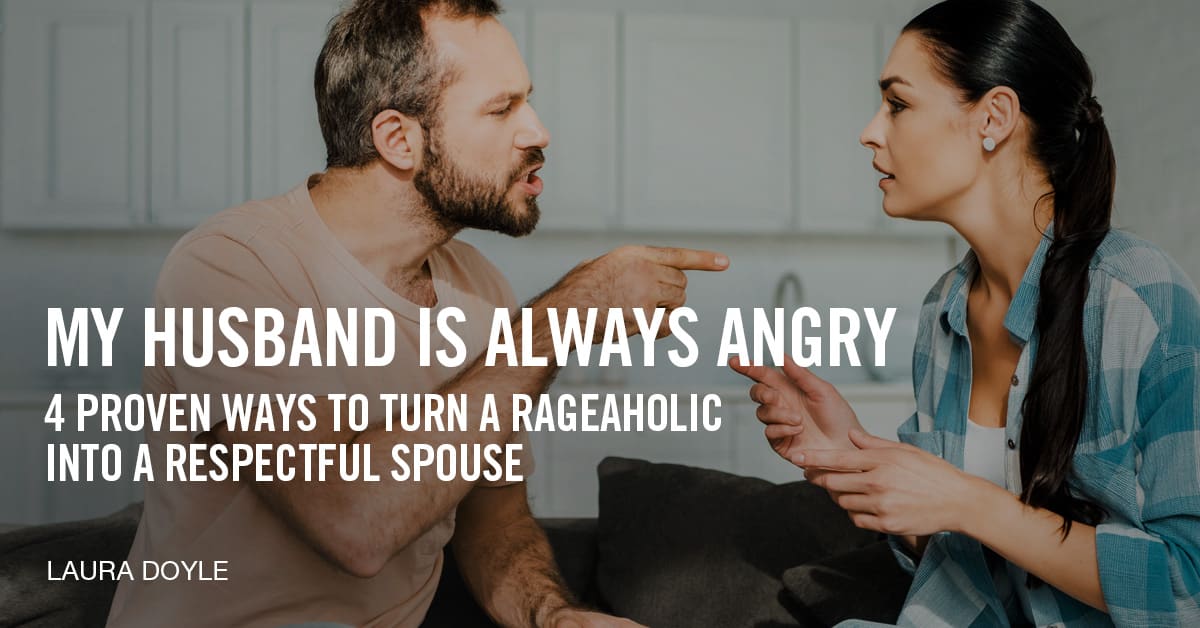 4 Proven Ways to Turn a Rageaholic into a Respectful Spouse

If your husband keeps getting angry, you are not alone.

When he blows a fuse at you or the kids, it can be really hurtful and scary.  When it happens again and again, then it has a way of making you angry too.  Especially if he jumps down your throat at the smallest things, like how you stock the groceries!

It’s baffling when you’re doing him kindnesses like making his coffee or having his dinner ready night after night.  If you’re doing everything you can think of to be a good wife and still getting the cold shoulder, it is downright disheartening.

He wouldn’t even treat the dog this way!

So what to do if your man is always angry and negative?  How do you deal with a rude husband?

Here are four proven ways to turn a rageaholic into a respectful spouse.

This sounds crazy because he’s the one who’s behaving badly and being mean, but… his reactions could be  an opportunity to look at your side of the street to see whether anything needs cleaning up.

His anger might be 95% of the problem, and that’s easy to focus on. But it’s a rare, wise woman who can also ask herself, “Did I do or say anything that wasn’t so great?”

When Ana’s husband kept getting annoyed with her day after day, it was as if she couldn’t do anything right.  She felt completely disrespected, which is when she decided to take a look at how she was doing showing respect.

Hmm, this all started after she offered to call the exterminator.  Sounds harmless enough, even helpful, but Ana knew that “helpful” in wife language meant “controlling” in husband language.  She was afraid that their Airbnb guests would have unexpected pest visitors and she would be humiliated online.

As usual, fear lay beneath her urge to control.  Sure enough, she was trying to control her husband to take care of the problem before they left town.

Granted, this seemed like a very small transgression to Ana, and it might to you too, but check out what happened when she decided to clean up her side of the street by saying, “I apologize for being disrespectful when I tried to control how you handled the pest situation.”

The tone in her house immediately improved.

Her husband thanked her for all she’d been doing to prepare for their trip and insisted she go relax and get her nails done.  The new tone of mutual respect and gratitude carried into their long drive, where he couldn’t do enough to please her.  Even with two little ones in tow, it turned out to be a romantic road trip!

Is there something on your side that you’re not super proud of saying or doing?  If so, how might you own your mistakes?

Maybe he’s nitpicking an improperly ironed shirt when, in reality, he’s annoyed at how you keep getting into his closet.  (Our “helpfulness” can wear so many guises!  Check out this podcast for fourteen other forms of control.)  Clean up your part–figuratively and literally–and respect his space.

If, on the other hand, you inspect your side of the street and it’s clean, then leave his mess on his side.  I haven’t found any value in apologizing just to make nice.  The magic only happens when I’m truly accountable for the part where I wasn’t at my best.

His rage is not your fault.  His bad behavior is squarely on his paper. Even if you did something to irritate him, that doesn’t make it okay to hurl curse words and insults at you.

There could be another source for his anger, such as problems at work or with the in-laws.

It’s tempting to ask questions like “What’s wrong?” or “Did I do something?”  Prodding him for what’s wrong with him or whether you upset him are back on his side of the street.  And that’s back in control territory.

Relinquishing control of his moods and staying on your side of the street, on the other hand, is a totally respectful thing to do.

You are a shiny wife mirror.  As you flourish your powers of respect, he will come around and start reflecting you by showing you the respect you deserve.

2) Disarm His Anger with These Magic Words

It’s also tempting to have emotional check-ins or encourage him to get therapy.  All “helpful” and (yup, you guessed it) controlling and therefore disrespectful.

Even pouring on empathy for what he’s going through can land askew.

Does he look at you funny–or not at all–when you validate, “That sounds really hard!  I can only imagine how stressful.  I would be so frustrated by what you’re going through.”

I find that’s because feelings tend to be one of women’s superpowers.  Such validation feels great to us.  For men, a mere “That sucks” tends to do it.

So, if you’re wanting to respect male culture, here’s the secret to making it safe for him to want to open up and share with you…

What I’m proposing here is easier said than done, but what if you didn’t reciprocate or react to his mood bait at all?  Remaining neutral can dampen his emotional intensity.  In time, he will calm down and mirror your reactions (or lack thereof).

Here are three little words to empower you to listen respectfully: “I hear you.”

What a relief when he knows you’re a safe harbor for him, that with you he doesn’t have to suck it up and “be a man,” especially since those pent-up emotions can snowball into uncontrollable outbursts.

If you want to go all out with this listening experiment, try just letting him talk while you practice that phrase for a full hour.

Easier said than done, I know!  Most women report that after dealing with the discomfort of stretching outside their comfort zone, however, it’s a relief not to have to problem solve, offer advice or fix anything for him.  And a joy when he steps up and takes the initiative to solve those problems himself (and the initiative to do more things for you too)!

There is one key exception: No need to say “I hear you” if he says something hurtful to you.

If he calls you names or curses at you, simply saying “Ouch!” and leaving the room is a powerful way to express your hurt in a dignified way.

When you have such a vulnerable, respectful way to give him the space to see that he has hurt the woman he loves, he’s way less likely to do it again next time.

If you’re been dealing with his outbursts for a while now, it’s easy to catch him doing something wrong.

The problem is: You are a powerful manifestor.

What you focus on increases.  That’s why every time you bring up this problem, even in an attempt to solve it, it magnifies and gets even worse.

What if you tried something different, like catching him doing something good?  If he expresses himself in a connecting way, let him know how happy he has just made you.  A little gratitude goes a long way.

This is different from being his cheerleader.  Trying to make him feel better through desperate encouragement or saying “It could be worse…” or “Why don’t you just…” oozes control, and men chafe at being controlled.

Even gently offering support by saying something like “Is there anything I can do to take the stress off your plate?” is being “helpful.”

“Helpfully” observing that he’s been getting angry a lot lately is likewise disrespectful, which actually creates even more distance.

That is, unless it’s from a place of “That’s not like you!”  Expecting the best outcome is super respectul.

Saying that would probably feel like a big fat lie.  Is it any more of a lie than telling yourself he’s always angry?

What difference does it make what you tell yourself (or him)?  Again, what you focus on increases.

When Tanya’s husband lost his temper yet again, she changed the dance by responding, “That’s not like you to lose your temper.”

This was a huge stretch since what she normally told him was “You always lose your temper!”  Sure enough, her husband gave her a funny look when she voiced her new affirmation, and even their 12-year-old son said, “Yes it is, Mom! He always loses his temper.”

Not long after, the husband was fuming at a restaurant’s slow service: “I have a good mind to call the manager over and let him know how long we’ve been waiting!”  Then, he stopped himself and said, “That’s not like me to lose my temper, is it?”

Tanya had not only shifted her own view of her husband but even how he saw himself!

4) Know When to Step Away

This is a perfect opportunity to take some time to do the things you love.

Not the family member who loves you so fiercely she’ll never forgive him for treating you that way, even after he becomes his best self and you’re ready to move past this chapter.

Not the friend who tells you what a jerk he is and that you deserve better.  It’s easy to find advocates for divorce.  They’re well-meaning but may not have the tools for their own relationships.

Hopefully you can confide in the rare bestie who’s a great listener and still stands for the marriage you want, maybe even steering the conversation to why you want to fight for it.

Or, if you’re one of the many women who don’t have that, check out a free support group like the Adored Wife Facebook group for a community of like-minded women so you do not have to be alone with this.

If your husband is a rageaholic, you might think all of this sounds too good to be true and maybe it won’t work for you.  But when women on our campus find the courage to experiment even when they think it’s completely hopeless, to paraphrase Thomas Wolfe, miracles not only happen–they happen all the time.