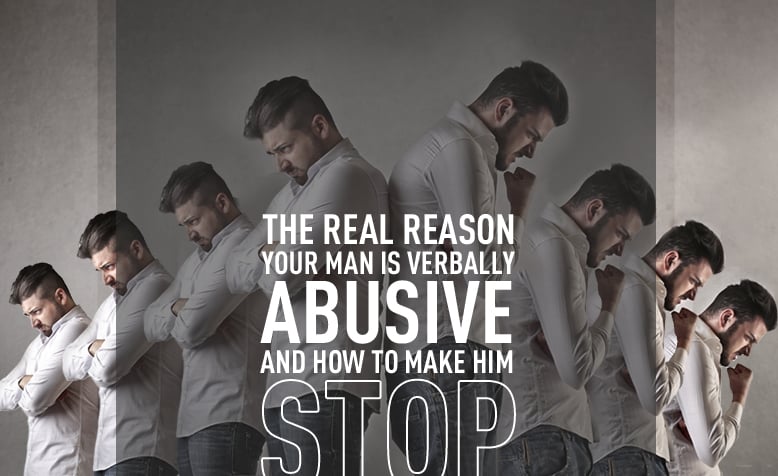 Is your husband or boyfriend incredibly cruel at times? Does he swear, yell and call you names? Does it undermine your self-esteem?

If so, then you may be verbally abused.

But I’ve made an interesting discovery about verbal abuse. Only women suffer from it—not men. Wrapped inside that mystery is a profound key to making your house safer and more peaceful, which I’ll explain step-by-step in this blog.

I’m not saying that women are never verbally abusive. I’m not proud to admit that I’ve said horrible things to my husband with the intent to lay him low. Maybe don’t tell anyone, okay? What I’m saying is that women tend to identify as suffering verbal abuse while men rarely use that term.

For example, even though I raged at my husband for years, he would have said I was in a bad mood or that we had a fight, but never that I was verbally abusive. I was surprised to learn that this is true pretty much across the board with men. I’ve asked hundreds of men and none of them cop to being verbally abused. They scrunch up their faces and say, “Naww, she’s just being mean.”

Interesting, right? Either verbal abuse is mostly perpetrated by men, or else men just don’t see themselves as being abused.

What’s the explanation? Do our harsh words land less painfully on their thick skins? Or could it be that what we experience as “verbal abuse” could also be described as hurtful things said during garden-variety fights?

Of course in the middle of a fight, mud is flying every direction. Both of you end up bruised. Often, women come to me with a list of cruel things he said during a fight as evidence that her husband is verbally abusive. She forgets to mention that she was saying equally punishing things to him during that fight. She’s more aware of her own deep pain than of any she inflicted.

But what if there’s no fight, no warning and your husband’s harsh, hurtful words appear to be coming out of nowhere?

In my experience with both my own relationship and many thousands of women who have practiced the Six Intimacy Skills, the underlying reason for the verbal abuse was always because she contributed to a culture of verbal abuse by being disrespectful. The astonishingly speedy remedy was to restore the respect with an apology when appropriate.

To be very clear, I am not suggesting that you apologize to make-nice, but rather only if you review your own comments and actions and find you’ve said or done something that was disrespectful or critical. If you have absolutely nothing to clean up, then there’s nothing to apologize for.

But if there is something–even something that seems very minor, or justified or it was a response to his bad behavior, there’s magic in accountability.

My experience with thousands of clients who have endured devastating verbal abuse is that they were able to create a new culture—a safe, calm, peaceful culture without verbal abuse. They spoke to each other with more kindness and playfulness.

Here are the steps they used:

When you watch the replay of your recent interactions with your husband, ask yourself if you were disrespectful.

Maybe you rolled your eyes or contradicted him. Perhaps you told him he shouldn’t have sugary drinks or criticized his plan to invest in real estate, for example.

It took Sophie in Washington a long time to realize how much what she was saying was landing as disrespect for her husband. And since respect is like oxygen for men, she was doing a lot of damage without realizing it.

That led to a lot of fights and hurtful, cruel words they said to each other––that is, until she applied Step 2 and got what seemed like a completely different husband.

Step 2: Restore the Respect with an Apology

Offer an apology for the specific behavior or words using the magic formula, “I apologize for being disrespectful when I…”

That probably sounds outrageously old-fashioned or just weird, if you’re anything like most women. I know, I know. I don’t like to say it either.

It takes a lot of humility to admit that.

But ending the cold-war and the verbal abuse in your home is well worth making the stretch.

It certainly was for Sophie, who reported that the fights and “verbal abuse” not only vanished, her husband started coming home from work earlier to spend more time with her and made her laugh more, which she loved.

Like Sophie and her husband, my husband and I have very little to fight about now that I’ve been implementing steps 1 & 2 for over 16 years.

We bickered in traffic about which way to go home recently. He was driving, so that was none of my business, but hey, I’m a mere mortal woman. But even then, neither of us said anything mean. It’s been that way for so long now that I can’t imagine it any other way.

Most of the time, my marriage is light and breezy—we play together and laugh, hold hands. We snuggle and share our dreams.

Women who practice The Six Intimacy Skills, including apologizing for being disrespectful, make verbal abuse vanish never to return.

If you’re thinking this will never work for you because your man is the problem, consider experimenting with eliminating verbal abuse in your relationship so the intimacy can thrive and grow between you. Emotional safety is essential to a deep connection, which really is all it’s cracked up to be.