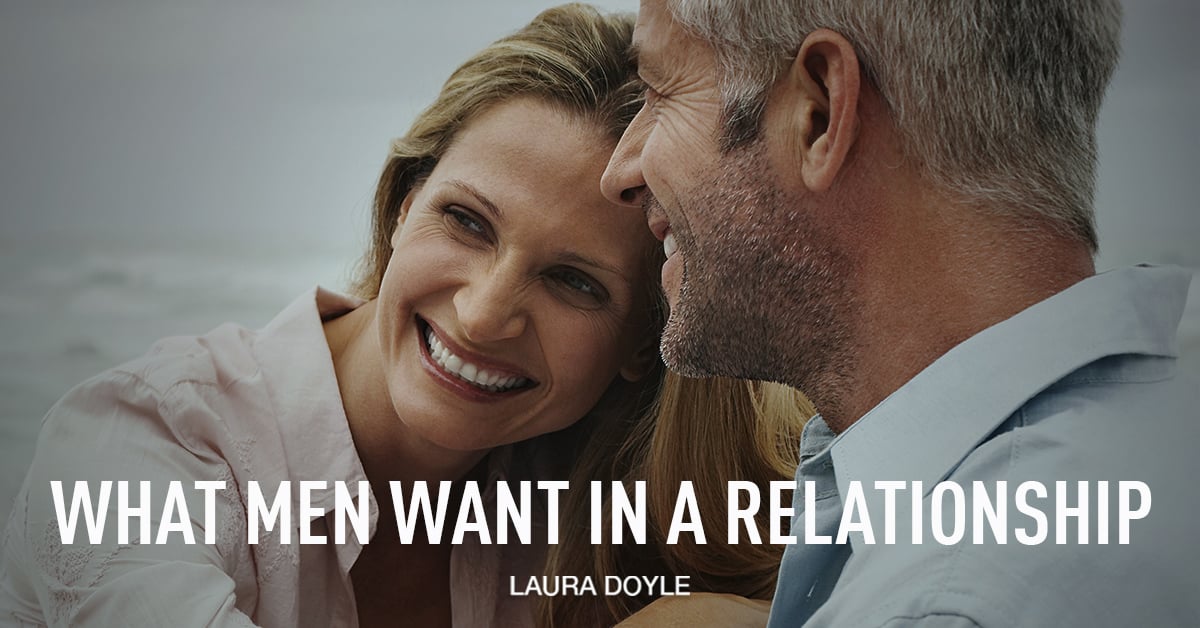 What Men Want in a Relationship

The 5 Relationship Hacks All Women Should Know But Don’t

What do men want most from the women they love?

If you’re asking yourself that, it’s probably because your guy seems grumpy, distant or depressed. Maybe he’s all three.

Early on in my marriage, when everything was a struggle, I thought I was a pretty good wife.

And since my marriage was miserable, that meant that he was the problem.

But now I realize I was looking at everything through my female eyes, which meant I didn’t understand his perspective. At all.

Figuring out what my husband wanted and what made him feel loved blew open the whole mystery for me.

It was like traveling to another country and wondering why everyone was so hostile, and then learning that waving “hello” is their gesture for “drop dead.”

Now that I know what makes men feel loved, my marriage is sweet and fun.

It was easier than I thought. I was making it too hard, until I discovered these simple habits.

These are the things your man really wants, and will inspire him to desire, cherish and adore you 10X over.

1. Respect Him (Which is Not What You Think)

Women have a different view of respect than men do.

Women tend to think they’re being respectful when they’re considerate.

We think it’s respectful to clean up so we don’t leave a mess for him, or to reheat his dinner when he comes home late, or to pick up his dry cleaning when we’re out.

Even as I write that with my female brain, I’m thinking, “Those things seem pretty respectful!”

But here’s the rub: all of that completely misses the respect mark for men.

Sure, it’s nice to do those things. But it’s not respect, which is like oxygen to men.

And unless you know what respect looks like to a man, you can easily suffocate your husband or boyfriend without even realizing it.

He’d rather you treat him with what he sees as respect, even if it meant you skipped all those things.

This is where the trouble starts, because if, while you’re reheating his dinner, you contradict what he just said, criticize him, roll your eyes at him, interrupt him, try to teach him how to do something or point out his mistake, he’s likely to get defensive.

That’s because you were just disrespectful.

And you didn’t even realize it.

You have no idea because you didn’t raise your voice or call him names. You’re not trying to upset him.

You were just being logical, or helpful, or practical. But in the process, you questioned his competence. And he reacted badly, and you can’t understand why.

And that’s likely to cause a big breakdown because here you are serving him dinner, and he’s barking at you or grunting or ignoring you.

Seems very inconsiderate of him. Seems like he’s not respecting you.

So unless you know that even though he’s a big, strong man, you just hurt him—just as much as it would hurt you if he said, “I don’t think I love you”––his irritation seems unwarranted.

To give him the respect he wants, demonstrate that you have faith in his capabilities. Appreciate his thinking. Let him know—in actions as well as words—that you think he’s smart.

He really is. You picked him to be with, and you wouldn’t have picked an idiot.

Your man wants to know that he can make your life better–that he can contribute to your happiness.

He doesn’t really care if you ever do anything for him (except respect his thinking and competency).

But he wants to be able to lighten your load, make you smile, make you laugh, protect you and give you the things you want.

He wants to be able to compliment you and know that you received it. Even if it’s that you look beautiful when you just cleaned the toilet.

If you receive his extravagant gift that you could have lived without, his offers to take you out to dinner even though you already defrosted the salmon, his compliments even though they make you uncomfortable—he’ll be getting so much of what he wants from you, he’ll be ridiculously happy.

And with all his help, gifts and compliments, so will you.

Such a deal, right?

Okay, so I made that word up, but I can’t think of a better way to describe the quality that men want in a relationship.

Since men are so driven to please their women, if he feels he can’t succeed, he’s going to start to feel useless and bad about himself.

He needs someone to please.

If he buys you a watch and you say that it’s not the kind of watch you would wear, or if, when he trims the trees and bushes, you say he trampled the begonias, or if you argue with him when he praises your lasagna, you’re not pleasable.

In other words, he can’t make you happy. And he considers that his job.

The quickest solution is to seriously focus on making yourself happy.

Do things that make it so you can’t stop smiling.

Consider the possibility that you would stop cleaning up the mess, reheating his dinner and picking up his dry cleaning if that helps you free up time for frivolous fun.

None of that stuff is as important to him as knowing he pleased you—especially if it leaves you frazzled.

When you get happy, he feels proud and happy, too.

That’s why that phrase, “Happy wife, happy life,” is so universal.

Even if your husband or boyfriend seems like a gigantic disappointment right now, using this hack will be like getting a new husband.

Let him know you appreciate the way he gets the kids to behave at dinner, even if it’s old news.

Appreciate what a great job he does with the trash. Be grateful it’s all taken care of and you don’t have to worry about it.

Let him know how happy you are that he made dinner, moved the laundry to the dryer, changed a diaper, fixed the WiFi, or changed the batteries in the remote.

Even if he’s done it for years and you’ve never expressed your gratitude, and it’s his job and you do it way more than he does, your man wants to feel appreciated.

If he didn’t do all that stuff, you’d have to do it.

Of course, your man wants sex, too. Unless he hasn’t been feeling respected.

Respect is the best aphrodisiac for men. So if it’s gone missing completely, start with that one. You can’t have passion without oxygen.

Once he has oxygen, he’ll be more life-like in the bedroom.

But even then, he doesn’t want to feel pressured to perform at a particular time.

He’d rather be teased, or get some visual stimulation that might lead to feeling excited.

And when you use those things to suggest that you’re willing, that you’re receptive, that’s awfully attractive and exhilarating.

It can also be scarier for you than just initiating things more directly with words or action. It’s riskier for you to put on your skimpy outfit, because he could just walk on by.

You could feel rejected.

But the upside is that you’re issuing your invitation in the most feminine possible way—with no pressure and lots of excitement.

You’re creating emotional safety by being open but not demanding. That’s what he really wants.

Another benefit of this approach is that you will never feel more desirable as when your man responds to your implied suggestion with enthusiasm and vigor.

Just as with all the other relationship hacks, the beauty of the system is that when your man is getting what he wants in the relationship, he shows up like the man you fell in love with.

The one you thought was smart, who couldn’t do enough to make you happy, who loves to see you smile, the one you appreciated, and who turned you on.

62 thoughts on “What Men Want in a Relationship”