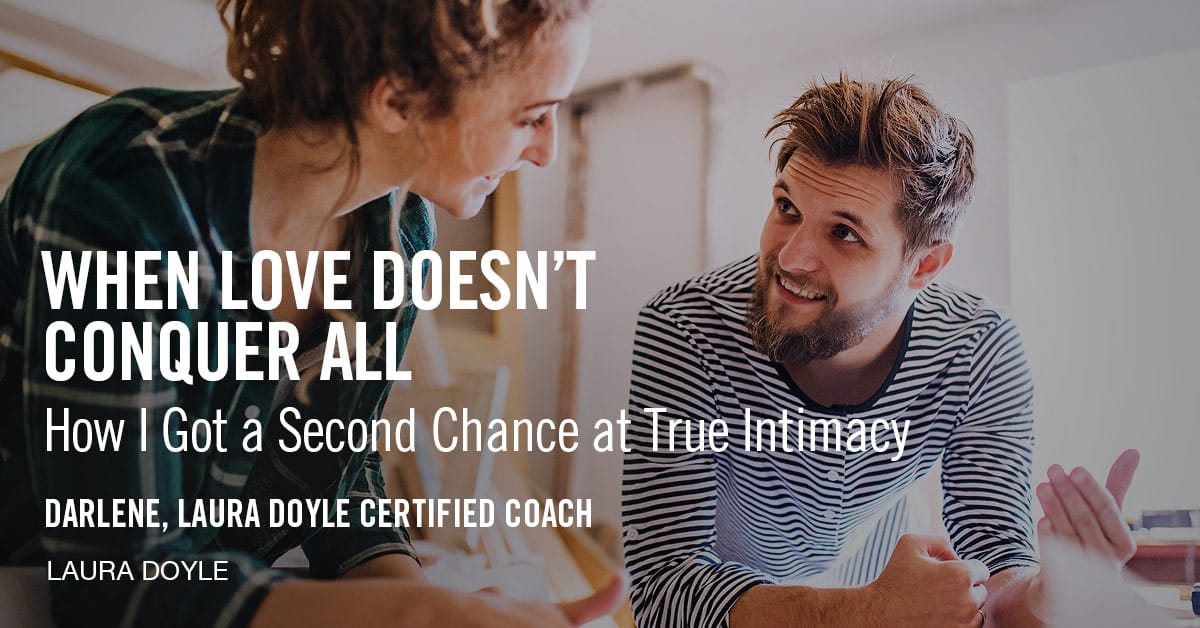 As always, I found out just when I needed to. I heard a woman on TV being interviewed by Katie Couric. Her name was Laura Doyle, and she had written a book called The Surrendered Wife. I sat up in bed, scribbled down the title, and listened intently as she described her marriage. I could not believe it sounded exactly like mine.

Who was this woman? What were these Intimacy Skills™?
I had to know. I knew that I wanted the intimate, passionate, and peaceful relationship she was talking about, but I was a strong, independent woman.

Did I really want to “surrender”?

I purchased the book immediately. As I read it, I laughed, I cried, I related to every word.

Then I realized that surrendering was not at all what I had envisioned. I thought I’d have to give up who I was to make my husband happy. Instead, the Intimacy Skills would help me become my best self, and surrendering was actually a beautiful gift I could give to this man I loved.

I also realized that I had been controlling and manipulative to get my way. I wasn’t thrilled to learn that, but I was willing to do what it took to change it.

I started honoring my husband and his choices, even if I did not always agree with them. I made sure that I acknowledged him when he did something for me, no matter how small.

I learned how important respect was to my husband and why practicing it is vital to a healthy, happy relationship.

The better I got at the Skills, the better our marriage became. I saw results immediately through his love.

I started to understand our differences and embrace my husband in all his manliness. His quiet strength was part of what made me feel safe and taken care of. I came to admire him for being a take-charge guy who never compromised who he was because someone might not agree with him.

As I learned to be vulnerable with Jay, I got an unexpected result of surrendering: feeling very feminine!

I had a new softness about me that was attractive. Vulnerability was my new normal. Since I’d spent my life as a self-professed tomboy, this was something new for me–and I loved it!

I also loved that our silliness was back and that I felt like a schoolgirl around him again.

I knew pretty quickly that this was the “new way” I had been looking for.

After years of surrendering, along came our grandson in 2007. How could such a small bundle of joy throw a monkey wrench in my surrendering?

I quickly learned how life circumstances, whatever they may be, can change things and throw you off course.

I had gone into “Mom Mom” mode and started taking over again. It wasn’t long before my husband made it very clear that I did not need to teach him how to be a grandfather!

He was right. How did I know how to be a grandfather? That was his job to figure out.

It was frustrating to realize that he still felt controlled. So back to The Surrendered Wife to try to figure it out on my own.

At that time, there was no Laura Doyle coaching organization. Laura had simply written a book based on her own marriage and research, never expecting that it would become a New York Times bestseller or that thousands of women would reach out for her help.

Since I did not have a support group or a coach to lean on, it was hard to practice the Skills! I kept failing. For example, I’d try to be “helpful” by putting the mortgage payment on the counter instead of reminding him that it was due or cleaning up his garage myself instead of telling him it was a hot mess. I couldn’t understand why he kept retreating, leaving me feeling sad and lonely.

Fortunately, that soon changed. After my 12 years as a surrendered wife, Laura created a support system where women could now benefit from coaching. I joined nine other wives training with Laura to become a Laura Doyle Certified Relationship Coach.

All my mistakes now serve as teaching tools for other women. As a coach, I get to guide a woman through her blind spots since I was once there. What a delight to share what is possible when all she feels is hopeless. It’s rewarding when a client has an aha moment and realizes that her “helpful” is really controlling.

I’m honored when I get to witness another woman’s transformation and stand by her side as she uses the 6 Intimacy Skills to become her best self. I’m grateful to be part of Laura Doyle’s mission to end world divorce.

What I have learned through coaching is that all women can have a beautiful marriage if they are committed to learning new skills.

Although such change can be challenging, we don’t have to go it alone. When I finally met Laura Doyle and other like-minded women, I found that they’d experienced many of the same obstacles I had. Having support from women who have been there is like a beacon in the night.

How grateful I am to have this tribe of uplifting women who allow me to be 100% authentic, flaws and all. I finally felt accepted for being in love with my misunderstood husband and willing to work on the tough stuff instead of walking away.

As a coach, I continue to receive coaching, which has made me a better woman all around. I get to choose how I want to show up in the world. My walls have crumbled, and I step forward with vulnerability. I have learned to receive instead of deflect. I let go of expectations and allow others to make their own decisions for their lives, and gratitude keeps me focused on my blessings.

Most importantly, I learned to take care of myself and be responsible for my own happiness. What a wonderful feeling to know that I had the answer all along. The new me inspired my husband to become a better man.

My story took a tragic turn when Jay passed away suddenly at the age of 58.

An unexpected gift I received through surrendering was grief without regret. There was nothing left unsaid or undone. I felt loved, honored and cherished by him, and most importantly I learned how to respect him.

The Skills showed me what is possible in marriage and have given me hope that I will attract love back in my life again. It has now been five years and thanks to becoming a coach, I feel empowered by the Skills and this community to bravely move forward and turn the page.

6 thoughts on “When Love Doesn’t Conquer All”