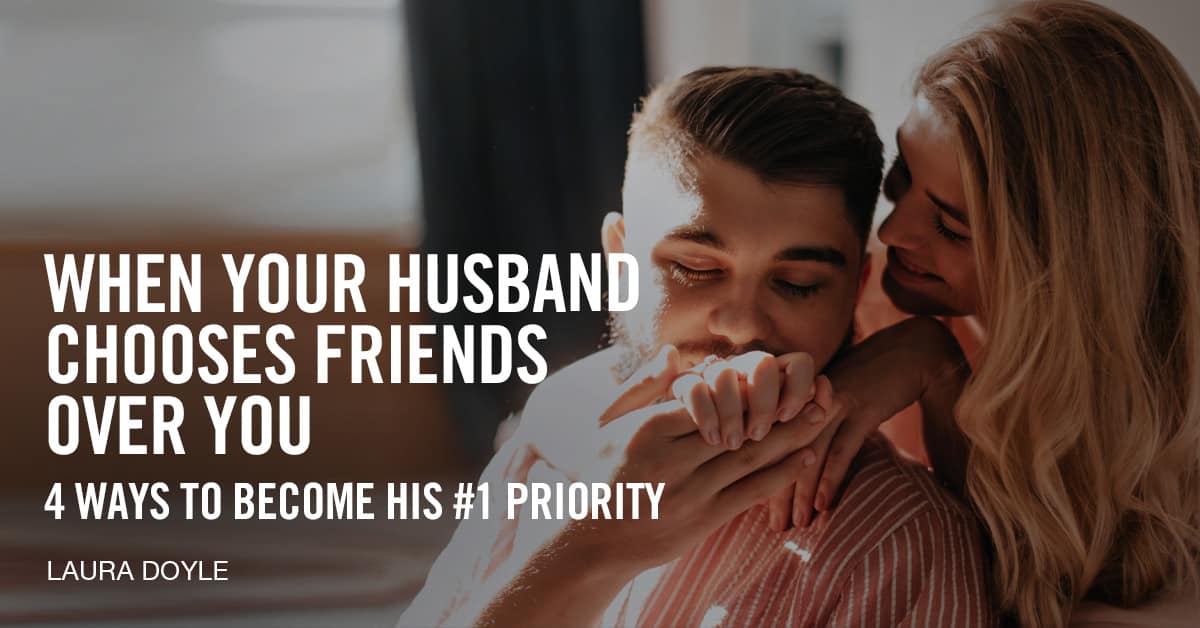 4 Ways to Become His #1 Priority

Does your husband always have friends over? Or talk to his best friend more than you?

Worse yet, how are you supposed to deal with a husband who goes out all the time?

Whether he’s a social butterfly or a barfly, not being his number one is downright disappointing. It can feel hopeless and so lonely. And make you angry too! Going it alone surely isn’t what you had in mind when you said “I do.”

Maybe you’ve tried throwing down the gauntlet and told him you need him to spend more time with you. If so, you already know that setting ultimatums and making him choose only pushes him further away.

Fortunately, there is an alternative, one that actually works.

Here’s what to do when your husband puts his friends first so that you can become irresistible and get the attention you deserve.

1) Learn How to Navigate Control

How have you tried to get your man to spend more time with you?

I asked nicely. I asked angrily. I pleaded. I told him how I felt. (I felt like he’d rather unclog his mom’s toilet than spend time with me.)

Worse yet, none of it worked!

That’s because all my misguided attempts to make him spend time with me were disrespectful. And I had no idea that respect is like oxygen for men.

I had no idea I was being disrespectful, for that matter.

That’s because disrespect and inappropriate control can look a lot like being the best wife ever.

Exhibit A: Yvonne felt like she had to drop what she wanted to do to be at her husband’s disposal if she was to have any chance of spending time together. This meant being at his beck and call for three-hour talks, even if she was hungry or yawning or really had to pee.

They were on the brink of divorce, and if she rocked the boat she feared he would be gone for good. He had resolved to stay away from her, so she had to take what she could get, whatever it might cost her…

As considerate as all of this seemed toward him, somehow it was never enough. With the support of her relationship coach, Yvonne saw that bending over backwards for him wasn’t serving her but was part of what had led to their breakdown. She realized that trying to make him happy out of fear of displeasing him was actually a form of manipulation.

So she changed the dance.

The next time he launched into one of their marathon talks, she told him she needed to go eat–a brave start to putting her own needs and limitations first.

That’s when a surprising thing happened. He started being more considerate of her. He offered to talk earlier, when she had more time.

The tone of their talks changed too. He went from clearly not enjoying it, just going through the motions to do his sacrificial duty as a husband, to wanting to talk to her.

He giggled, “I always have time for my wife”–and meant it. He not only started asking to spend time together, he asked to reconcile. These days, they spend lots of time together (something they used to fight over).

What are some ways you’ve tried to be a good wife that don’t seem to be serving you?

Making his meals every day but not letting him have a say with parenting? Trying to help with his diet, wardrobe, or career (kinda like his mom would)? Or “helping” with decisions by bringing in the debate team?

How could you change the dance to let him be The Man and step up as your hero?

Because when you start showing that you trust his thinking and expect the best outcome, that’s exactly what he’ll do.

And if he wants a guy’s night every week, there’s an opportunity right there to show that you do respect his choices.

It can be hurtful when he retreats into his man cave. Here you’ve spent all day looking forward to the moment you can snuggle together on the sofa with a bottle of wine and Netflix. But when the kids are finally in bed, he hightails it out to the porch to play online poker. It’s hard not to take that personally.

Sure, the dreaded man cave can be a symptom of the disrespect and control we’ve been talking about.  But once you’ve restored respect and let go of inappropriate control, in its many guises, there’s a good chance that his retreat has nothing to do with you.

Maybe he had a stressful day or just needs some me time. That’s right: Men need self-care too.

If you’re anything like I was, you already know how attractive it is to try to make him be with you; it’s like trying to stick two magnets together the wrong way.

For different results, why not try a different approach?

Like giving him space instead of trying to force those magnets.

Leslie kept trying to make her husband, Rick, spend family time going for a walk. But Rick just seemed to sink deeper into the sofa when she’d make the dreaded announcement that it was time for a walk (her cue to give him the evil eye).

She recognized that this dynamic was not working, so she decided to switch her approach. In fact, she let go of trying to get him to do anything. After all, she’d spent years trying to control him and he was less inclined than ever to please her. So she focused on pleasing herself. Instead of expecting him to fulfill her desires, she honored them herself, including going for her evening walk.

Rick seemed relieved that she wasn’t asking anything of him. He even thanked her for it, as if she were finally hearing him. Even his favorite T-shirt had been trying to tell her: “I need my space” (said a stargazer under the NASA logo).

Then, one day as she headed out the door with the kids, Rick shouted, “Wait for me!” and scrambled to get his shoes on.

It felt so good not only that he was spending time with her but that he was doing it because he wanted to.

Turns out, respecting a man’s need for space is pretty attractive–and great for the relationship. Having his own life apart from you (work, hobbies, friends, his guy time) actually helps him to be a good husband.

Even if you’re determined to respect his guy time, you’re only human. You might get annoyed when he’s at that darn video game again or watching the Walking Dead marathon until he starts to resemble a zombie himself. Except a zombie would actually acknowledge your existence.

If you find yourself begrudging his self-care, that is valuable information. Because it’s usually a warning light that your self-care tank is starting to run low.

It’s tempting to take the bait that you’re the only grown-up in the house and now have to do dinner, cleanup, bathtime and bedtime since he obviously has no intention of lifting a finger. However, you know that doing everything yourself will make you resentful.

I know, I know. You’re the wife! You don’t have that luxury. Somebody has to get it done.

The question is: Who put it all on your shoulders?

In my case, it was me. Once I quit the nasty habit of doing everything myself, there was a lot more space for my husband to step up and be the hero. And as it turns out, I love my space too. Because he even started doing dishes. Then, he started doing all the dishes! To this day, I do not have to wash a dirty dish.

This is not about having a power struggle to make him do anything or about bowing to his whims either.

That goes for spending time together too. If he only spends time with you if his friends cancel on him, you can respectfully say that you have other plans. Setting the stage for self-respect has a way of inspiring him to follow suit.

Part of Yvonne’s recipe for becoming “super happy,” as she came to describe herself, was cultivating her own life rich in self-care. She even gave herself permission to move to an expensive apartment where she could take walks around the marina.

What would make you super happy?

For me, the answer meant scrapping my old ideas about what I thought constituted self-care. Yoga, chia seed green juice, and boot camp workouts were all good for me, sure, but they did not feel joyful while I was doing them.

Volleyball, poker, and chocolate, on the other hand, did.

Some essentials on my list are creative, spiritual, and social self-care. Surrounding yourself with your own circle of friends or a community of like-minded women is healthy for both you and your marriage.

What if you started to schedule at least three things from your list every day? Imagine what it would look like to be so filled up that you could show up to your relationship as your best self.

Here’s what I see: Your man will immediately go out of his way to be in your presence. It’s a virtuous cycle where he’ll want to do even more to add to your happiness. That’s because nothing is more contagious than his wife’s happiness!

Piling on your own self-care not only frees you from resenting him for being the King of Self-Care; it is the key to turning the magnet around the right way.

It empowers you to honor how you feel and what you want.  To make your favorite meal or order it if you’re too tired to cook.

To show up fun and flirty.  To flaunt your femininity, putting on an outfit you feel great in (and feeling even better when he starts to notice you again).

To break your routine.  To mention (while telling him how much you loved your previous sex sesh) something you’d love to try next time you’re in the bedroom.

To express your desires in a way that inspires, like mentioning that you’d love to visit Tennessee or Bali.  (Yvonne told her husband she wanted to move to Florida, and less than two months later they did just that!)

To send him sexy texts, watch a funny movie, share inside jokes.  To remember the old days, including what attracted you to him–and to remember the woman you were when you attracted him.

Now that you have all these powerful ways to become your man’s priority, what will you do first to prioritize yourself?