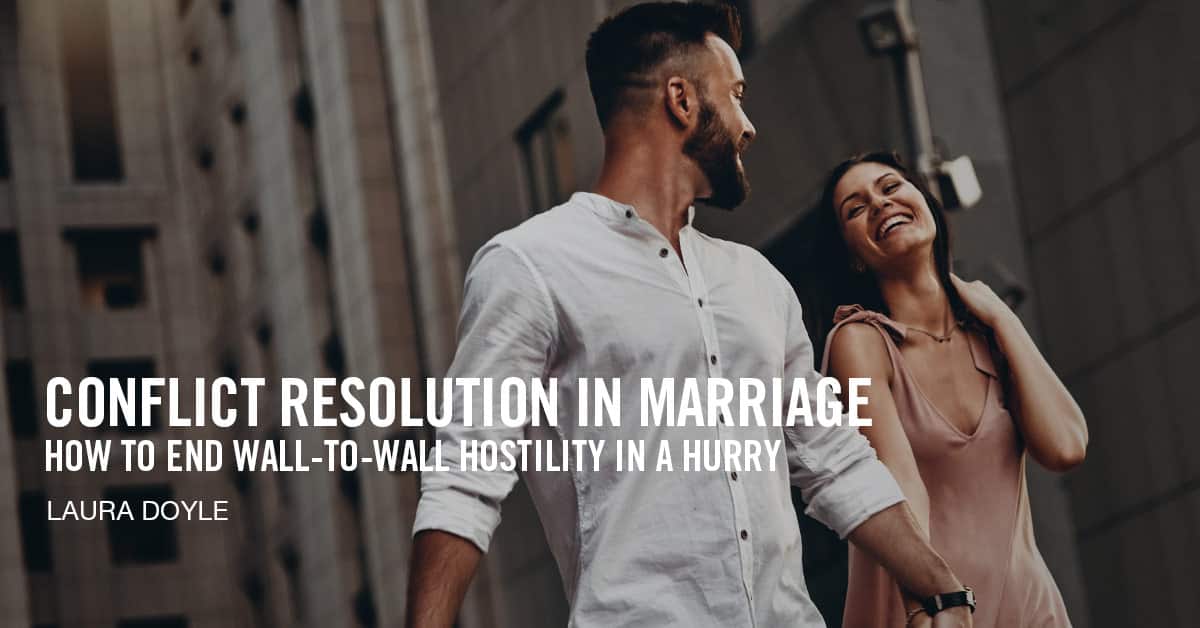 How to End Wall-to-Wall Hostility in a Hurry

When you’re fighting, bickering and snapping at each other, you just want it to stop.

You want him to understand where you’re coming from and make him realize that it’s ridiculous to keep arguing.

Or else you find yourself imagining how nice it would be to be alone, with no one contradicting or finding fault with everything you say.

You’d also love an apology and some assurance that he’ll stop causing so many conflicts with you, the kids, the neighbors and everyone else who crosses his path.

Most of all, you want a peaceful house. But how?

You can singlehandedly cultivate the calm you crave.

Coach Sue recalls desperately wanting to buy a house with her husband shortly after their wedding and having plenty of disagreements about it.

The house she loved was getting away while he was brooding over his concerns.

Terrified that this conflict represented a huge schism that could break them apart so early in their marriage, she tried to convince him that they should just buy the house. However, things only got more tense and unpleasant between them.

They went on that way for months, until Sue decided to take a different approach.

The next time her husband started enumerating his concerns about them buying a house together, instead of defending, debating or dismissing, Sue just listened to what he was saying.

When he finished explaining, she calmly used this magical phrase: “I hear you.”

And she meant it. She had really listened to his words without racing into the future and worrying or pointing out where his thinking was flawed.

That’s when she saw her husband relax for the first time in months as he sighed with relief and said sincerely, “Thank you!” He looked so grateful to be heard and understood.

She realized that his thinking wasn’t as threatening as she had built it up to be in her head. What he said even made sense now that she was listening without the agenda of making him wrong.

After that, Sue had a different take on the house purchase. As she spent more time considering her husband’s input, the entire process went more effortlessly. Soon enough, they were the proud owners of a wonderful, peaceful new home.

Consider giving your husband airtime by truly listening to him without commenting–no agreement or disagreement. Just honor his words with your listening ear.

Simply letting him know that you hear what he’s saying, that what he says is important to you, will work wonders in restoring the peace.

Even if you’re fighting 23 hours a day, you’ll be amazed how quickly this will relieve tension.

When Jessica’s husband woke up on the wrong side of the bed one morning and had only negative, mean-spirited things to say, she felt like she couldn’t win.

Finally, she pointed out that he was grumpy because he’d been drinking the night before.

That did not help matters. At all.

They exchanged hurtful barbs nonstop all morning, and Jessica was furious at him for taking his bad mood out on her.

A student of the 6 Intimacy Skills™, Jessica decided to regroup and ask herself how she felt and what she wanted.

The answer was that she felt mad! Her husband seemed like the biggest jerk on the continent.

She wanted to tell him exactly how she felt: attacked and unsafe. But she knew those weren’t actually feelings–just thinly veiled blame and criticism. So she wisely said nothing for the moment and again asked herself what was true for her.

She realized that under her anger was…hurt. And loneliness, as she longed to feel close to her husband again.

To clean up her part getting in the way of that closeness, first she apologized for being disrespectful when she had criticized him for drinking.

Then, since saying he had hurt her would just be criticizing him again, she simply said, “I’m lonely and I miss you.”

Her husband apologized too, for being a jerk. He hugged her reassuringly, and just like that the connection was back.

3. Let Him Listen to His Own Conscience

Marla had been using the Intimacy Skills for a while and the fighting in her marriage was way down, but sometimes she still saw her husband having heartbreaking conflict with their kids.

The day he yelled obscenities at their teenage son, she was horrified.

Drawing on her faith that her husband was a good man, she chose to see him for the mere mortal parent that he is.

She wanted to support her husband in what appeared to be a very low moment for him, even as she was feeling heartbroken for their son.

She knew that this swearing tyrant was not the man her husband aspired to be, so she did something that surprised even her: She gave him a hug.

Then she went off in search of self-care to distract her from the conflict between her man and her man-child.

No one was more surprised than Marla when, just a few minutes later, the conflict was over. Her husband was sitting on the bed with their son, speaking quietly, and they were both crying!

By showing support for her husband and then stepping aside instead of trying to mend this conflict, Marla left room for him to hear his own conscience.

Apparently, it had spoken very loudly that he owed their teenager an apology because that’s what he did. Then the teenager apologized too!

Marla was filled with admiration for her husband having the humility and strength to admit his failings and ask forgiveness, and her mama heart swelled that he treated their son with such gentleness afterward.

Which of these secrets will you experiment with next time there’s a conflict at your house? I’d love to hear in the comments section below.

37 thoughts on “Conflict Resolution in Marriage”