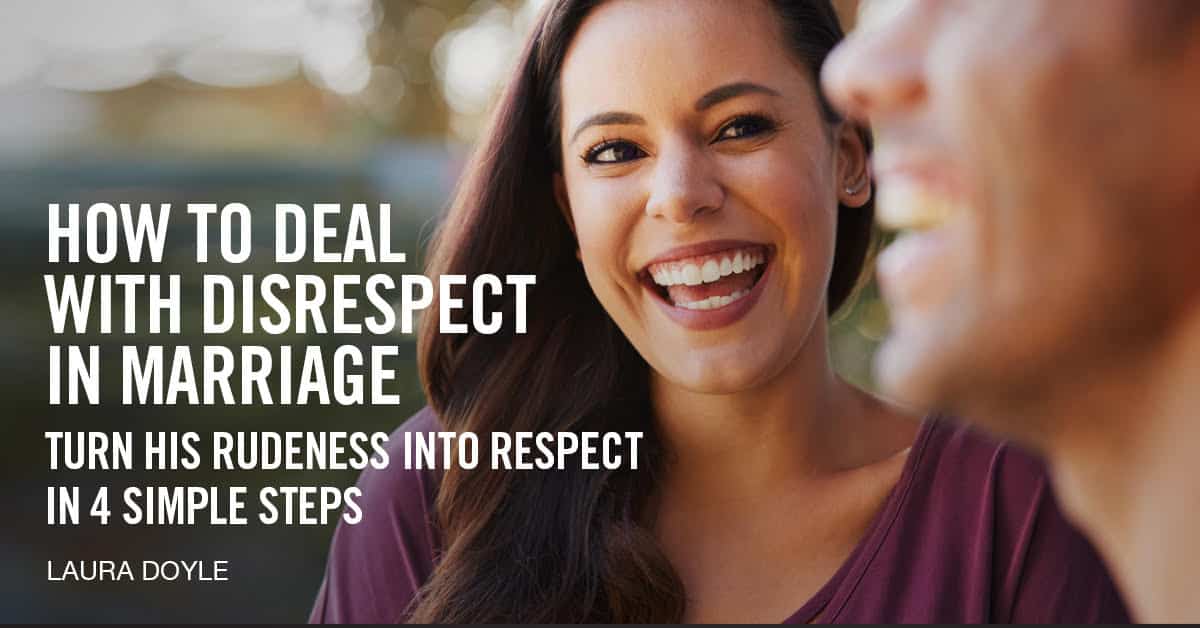 Turn His Rudeness into Respect in 4 Simple Steps

If your husband criticizes you, it hurts.  You’re doing so much, yet somehow it’s not enough.  No matter how hard you try, your parenting, your housekeeping, or your work just don’t measure up–or so he would have you think.

Or maybe he tries to control how you do things, like “correct” grocery storage or underwear rotation.

Worse, he speaks to you like he wouldn’t even speak to a dog, yelling, swearing or calling you names.  Having such a verbally abusive husband is a devastating red flag.

Perhaps he just keeps getting annoyed with you for no apparent reason at all, making you feel like a supreme irritant who’s worthless and totally unattractive.

That is such a lonely place to be.

I know because I used to be there.

The good news is that if you’re seeing any of these troubling signs of a disrespectful husband, there is still hope for fixing your marriage.

Here are four counterintuitive secrets for dealing with disrespect in a relationship so you can get the respect you deserve.

If you have no power to prevent your partner from being verbally disrespectful or exploding on you, what choice does that leave but divorce?  Or staying a victim.

Actually, there is an alternative.

As a woman, you are the keeper of the relationship.  That means YOU have the power to set the ground rules for respect.

Your man’s filter could be very different from yours (or seemingly nonexistent).  He may not even realize that his words hurt you.

Fortunately, you can teach him to treat you, in a hurry.

When he says something hurtful, say OUCH and leave the room.

If he does something angering, say OUCH and leave the conversation.

In my experience, such reactions are a good thing.  They confirm that you are changing the dance.  Chances are it’s an old dance, and it’s courageous of you to teach him new dance steps.  That’s why I get a perverse pleasure from watching husbands squirm.

It’s also because I know what happens when a wife continues the new dance steps.  What happened for me is that 99% of the hurt is gone.

There’s no more choosing my battles.  The battle days are gone.

There is a catch.

“Ouch” will not work too well if you have already been disrespectful yourself.

I know that being respectful sounds easy enough.  In the bad old days, I would have told you I was totally respectful to my man!  Except for how he watched too much TV, ate all that junk, was such a slob, and didn’t make enough money.

You see, I had no idea what respect looks like for a man.

I didn’t know that when I rolled my eyes at him, contradicted him, or told him what to do, I was sucking the oxygen out of our relationship.

As much as I wanted to point the finger at him for being mean, I myself said horrible things to my husband to lay him low.

If there’s hope for an ex-rageaholic like me, there is definitely hope for you.

Today I get to show up dignified.  But that doesn’t mean I’m perfect.

When I do criticize his client, like I did recently, trying to control his business decision (which is really none of my business), I have a magical phrase for that too.

“I apologize for being disrespectful when I…”

Fill in the blank with what you did, leaving out any if’s, and’s, or but’s.  “Sorry if I hurt you” or “I’m sorry but I felt hurt when YOU said…” completely undoes the apology.

Sure, this phrase will probably feel like sand in your mouth at first.  But having the accountability and humility to clean up your side of the street turns out to be enormously empowering.

It also restores the intimacy in a hurry so cold wars are a thing of the past.

Just ask Kelly.  When her husband seemed annoyed by her very existence, she got pretty annoyed herself.  How could he treat her so disrespectfully?

Since she was feeling disrespected, she decided to look at how she had been doing when it came to showing respect.  Sure enough, she’d been trying to control how he handled their extermination, trying to get it done on her schedule before they left town by asking “helpful” questions like “Do you want me to call the exterminator?” (with the subtext that he wasn’t capable).

Once she used her magic words to restore respect, her husband’s entire demeanor changed.

He thanked her for doing so much to prepare for their trip.  He insisted she relax and go get her nails done.  Being stuck in the car with two little ones for fourteen hours ended up being a romantic road trip, where he couldn’t do enough for her!

What if your husband is complaining about the messy house, as if you haven’t been working all day yourself, or the kids’ behavior, as if you’re now falling short as a mom too?

It’s hard not to take such complaints personally.

If you’re reading this, you know by now that taking his bait and explaining, justifying, debating, or defending the kids or yourself will only escalate things.

If his words are not hurtful, why not simply say “I hear you”?

And that is attractive.  If you’re missing the deep talks you used to have, there’s no surer way to create the safety to bring those back.

If you want to supercharge your new Intimacy Skills, how about appreciating something you do respect about him?

Sure, it’s tempting to call him out for spending extra hours at work when you need help at home.  What would happen if you were to nix the complaining, instead telling him how grateful you are for him working so hard and being such a provider?

Or to express gratitude for his unique way of showing affection?  Maybe he isn’t a whiz with his words but he makes your coffee every morning, with two sugars just the way you like it.

Not only will he be inspired to please you even more, he’ll start expressing the appreciation you so deserve.

Step 4: Show Up as Your Best Self

Such experiments may be a stretch for you.

But if you’re as stressed, exhausted, or overwhelmed as I used to be, they’ll be more than a stretch–they just ain’t gonna happen.

When I’m depleted, self-care is the first thing to go out the window.

These days I make it a point to do at least three self-care activities a day, like playing volleyball, having lunch with a girlfriend, napping, singing, bike riding, getting a facial, or going to the bookstore for tea.

When I’m filled up, I can show up as my best self.

I’m not alone either.

Rita was terrified when, after twelve years of marriage, her husband became a selfish, grumpy workaholic who insisted on the house being tidy at all times–even though they had toddlers!  But he was too busy working to help with the family, so Rita was stuck being responsible for everything.  Any attempt to talk about it would result in a cold war for days.

After a few weeks of piling on self-care, the next thing she knew he was asking her out on a date with a shy smile.

“Yes, yes, yes.  I felt on a high!” she recalls.  “I was so excited about it that I couldn’t stop smiling the whole evening out with him!”

What self-care would fill you up?

Especially if you are feeling disrespected, what personal de-escalation tactics would work for you?  Taking a walk, listening to a guided meditation, or punching a pillow?

For me, social self-care is a must, including surrounding myself with like-minded women as committed to marriage as I am.

If it’s hard to come by women who support your vision for your relationship, check out a marital support group like the free Adored Wife Facebook group.

Now that you have the tools to create mutual respect in your marriage, which one will you try first?

7 thoughts on “How to Deal With Disrespect in Marriage”