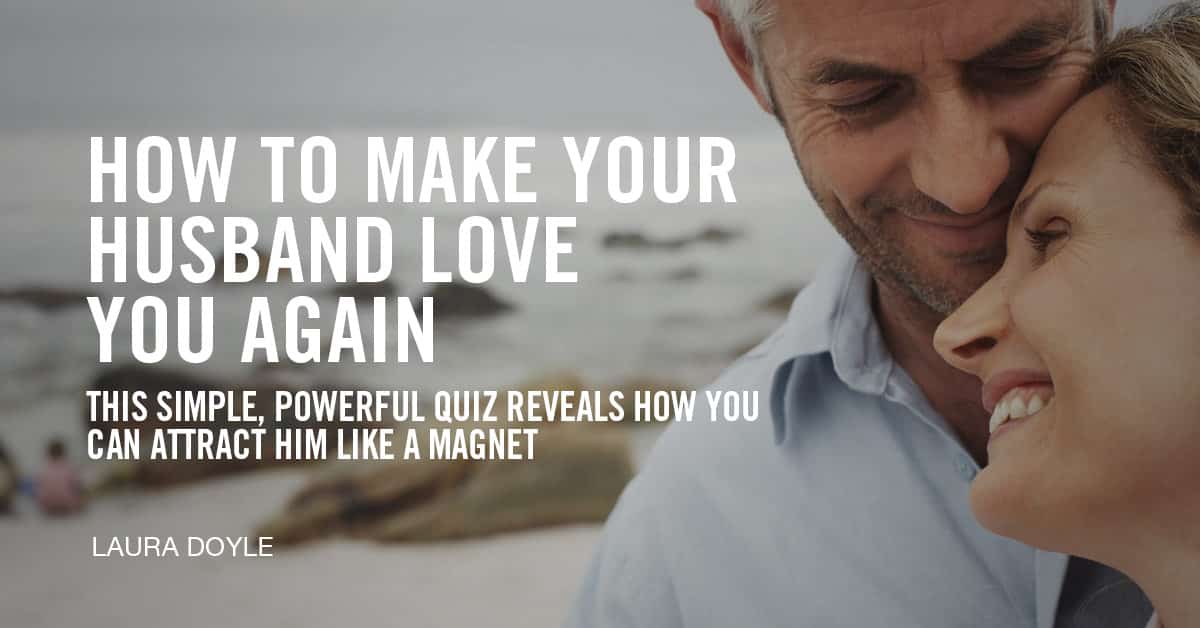 How to Make Your Husband Fall In Love You Again

This Simple, Powerful Quiz Reveals How You Can Attract Him Like a Magnet

I often hear this heartbreaking question from women: “My husband says he’s not in love with me anymore. Should I just give up and move on?”

Who wouldn’t feel unloved and hopeless hearing those words? What a lousy thing to experience.

But it doesn’t mean your man will continue to feel that way. You have a lot of influence over whether he loves you, and you can regain his affection–no matter what he says.

I don’t mean you should try harder or make his dinner or do his laundry. Quite the opposite.

This isn’t about what you do in bed either.

It’s about using your power to create more love between the two of you.

To get you started and show you what I mean, I made a simple but powerful quiz that will give you incredibly clear insight about your relationship.

And with the self-awareness you’ll gain from this quiz, you can take effective action that will make your husband fall for you again–hard!

It worked for me, and it’s worked for thousands of women all over the world in 18 languages and 29 countries.

It will work for you too.

To find out what’s in your blind spot, write down the first thing that comes to mind in response to these questions. Be sure to answer all the questions before you scroll down.

Imagine Yourself with Your Man One Year from Now

1) Setting the scene, where are the two of you?

2) What kind of interaction are you having?

3) How is the atmosphere between you?

4) Is there a physical connection between you?

5) Is there a conflict? If so, how do you handle that?

Before you scroll down, I want you to know that this little quiz can give you deep insights that lead to major improvements in your love life. So I invite you to answer each question in writing or out loud before you continue.

What Your Answers Say About You and Your Relationship

This quiz reveals what you’re imagining your relationship will be like in a year, which means that it’s the relationship you are currently creating in your mind.

Thinking about your answers, is the scene you imagined befitting of a romantic comedy? Or is it more like a tragic movie?

In other words, did you imagine the relationship you want to have–the one you dream of?

Or did you imagine the relationship you’re afraid you will have?

It bears repeating: This quiz gives you a glimpse into what you are focused on and actually forming for your future.

If you imagined the two of you in a hot tub sipping wine and smooching, arguing about who’s more ticklish, that’s what you’re creating.

If it was some romance and some tragedy, that’s what you’re creating.

That’s what’s in your blind spot.

Kinda makes you want to go back and redo your answers, doesn’t it?

You know, I like how you think! That’s a GREAT idea.

You’re always writing your movie. You’re the director. So why not make it the way you want it to be?

You Can Take the Quiz Again

When I first caught a glimpse of what I was imagining and realized it wasn’t what I wanted, I decided to focus on what I wanted instead.

If your answers from round 1 reflect what you want already, then congratulations! You can elaborate some more, but you’re already using your imagination wisely. Well done!

If your answers are not what you want to experience, why not give your future a second chance?

This time, instead of writing down the first thing that comes to mind, imagine the experience you want to have a year from now in your relationship.

How would you like this movie to play out?

Even if you have mountains of evidence that insurmountable problems plague your love life, consider focusing on the experience you want to have.

1) Setting the scene, where are the two of you?

2) What kind of interaction are you having?

3) How is the atmosphere between you?

4) Is there a physical connection between you?

5) Is there a conflict? If so, how do you negotiate that?

Now doesn’t that vision of your future feel good to think about?

It did to me too.

Choose Your Focus This Time

If you’re wondering what the use of doing this exercise is, since your husband doesn’t seem to love you anymore, you might take inspiration from Amelia, whose husband is a politician.

Her quiz revealed that she pictured her husband shaking hands and conversing with others while she was neglected at home or left to fend for herself at a social event.

In Amelia’s first response, the two of them weren’t interacting at all, and the atmosphere between them felt oppressive and tense, with no physical connection.

She was starved for her husband’s love and attention, but in her mind when they parted ways, he barely acknowledged her in his rush to get to the next event.

Obviously it was not the relationship she wanted–just the one she had fallen into thinking about because of previous hurts.

Then Amelia discovered she had a choice to focus on something else. She decided to imagine herself feeling honored as a wife, even though she could barely picture that.

Shortly after she started to focus on being honored as a wife, mostly just saying the words to herself, she attended an event where her husband gave a speech. During the speech, he acknowledged and thanked his wonderful, patient wife Amelia for all her sacrifice and love. He told everyone how very special she was.

He had never done that before in 20 years of marriage.

She could hardly believe her ears, even when the audience clapped and turned to her, smiling. Some people came up to her afterwards, repeating her name and expressing their gratitude for her also.

To say she felt honored is an understatement.

She was so blown away she was speechless.

On a Surrendered Wife Empowered Woman Q&A call, one woman asked me where the line is between focusing on what she wanted more of and having a psychotic break from reality.

“If I’m affirming how loving my husband is to me and I know that’s not true, isn’t that just…lying to myself?” she asked.

When a child imagines herself becoming an astronaut, we don’t think of it as her lying to herself. We call that dreaming big.

Einstein’s famous words “Imagination is more important than knowledge” match my experience of the power of our imagination in relationships, even if you’re all grown up.