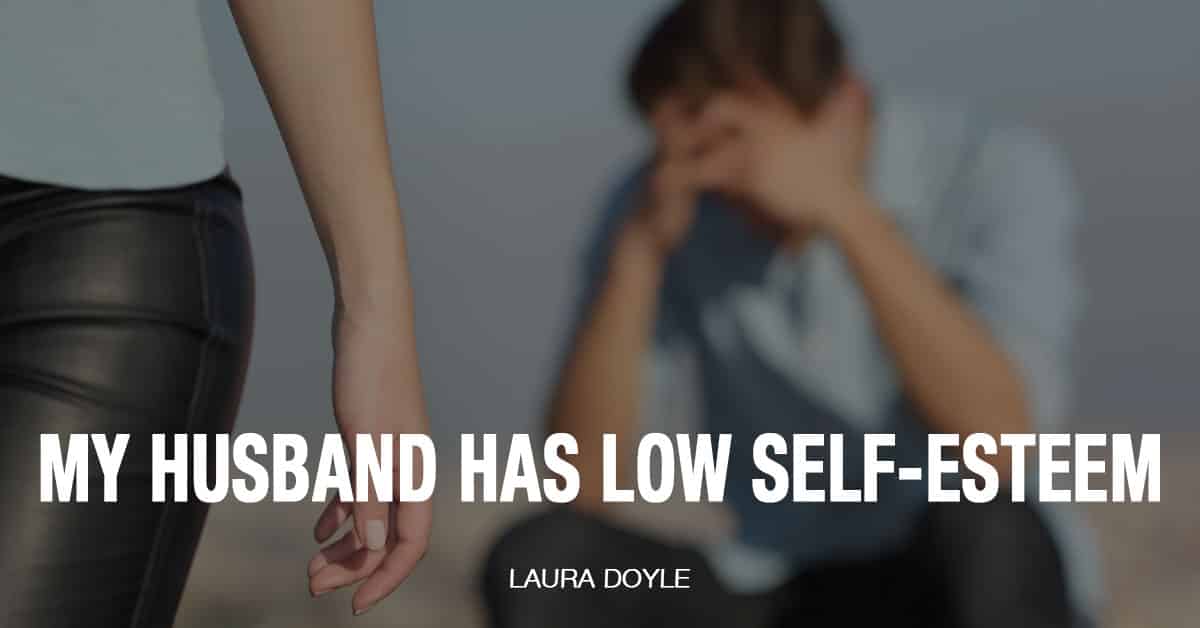 My Husband Has Low Self Esteem

11 Ways to Give Your Husband Swashbuckling Swagger and Self-Confidence

A confident man is a sexy man.

But an insecure guy is not very appealing.

When you see his doubts and low self-esteem, his indecision or inability to handle a situation you could manage with half your brain tied behind your back, it’s a turnoff.

You start to wonder what you ever saw in the guy. You want him to believe in himself already.

You want to see some conviction and manliness.

Every wife wants her husband to be confident. So how do you cultivate that?

Isn’t it something he’s got or he doesn’t? Can you even influence his self-esteem?

Of course you can. Just not the way you think. Not by telling him to be more confident.

You’re the woman who knows him best in the world, and what you think of him has a profound impact on what he thinks of himself.

1. Stop Doing Things for Him

If you’re anything like I was, you see lots of things you can do better than your husband, and you’ve started doing them for him.

You hang up his clothes the right way so he doesn’t look like he has a growth on his shoulder where the hanger was digging into the fabric.

You rewrite his resume so he can get a better job.

You pack his lunch so he gets something nutritious.

Consider resigning from those jobs—and anything else he can do himself.

Since he was a capable, grown man when you married him, that includes everything.

Why? Because men are different from women in this way: They feel better when they do stuff for themselves. They feel more like men and less like little boys whose mom does stuff for them.

In other words, helping him out can steal his swagger.

I wouldn’t have believed it if I hadn’t lived it.

I stopped doing most things for my husband long ago, and he has never seemed so self-assured to me.

Case in point: After a video shoot with his lawyer clients, my husband told me how, when things didn’t seem very organized, he told the lead lawyer, “Let’s get all of these knuckleheads out of here so we can get these other shots done first.”

The lawyer agreed and said to all the other lawyers, “All of you knuckleheads get out of here and we’re going to get some other shots done first.” Everyone filed out of the room.

My husband called his clients “knuckleheads” and they liked it. So self-assured!

Next he said to me, “Now I’m going to come home and you’re going to pour me a beer.”

He was so appealing I poured that beer for him.

But most of the time, I let him do things for himself.

2. Let Him Do Things for You

I know it’s like a cruel joke that no one tells you these things before you get married, but your husband would rather you didn’t do things for him at all while he does things to make your life better and easier.

Really! You can read all about it right here.

So when he offers to run to the store to get Cocoa Puffs because he knows you want them for breakfast, let him do it.

If you say, “That’s okay, you don’t have to go to the store” and suck it up and eat oatmeal instead, you’ll be missing a chance to shore up his sense that he contributes to your life—that he makes it better.

In other words, you sucking it up is bringing him down.

Consider being grateful while you let him spoil you silly.

If you take a bath while he goes out in the rain for the Cocoa Puffs and then you’re so happy when he gets back because you’re relaxed and rejuvenated, that will make him more self-assured.

If you’re feeling good, he figures he did that. He made you happy. And that makes him feel successful.

It’s impossible for him not to feel more confident when he’s in this virtuous cycle, and it all starts with you getting happy.

When he’s leaving for the store, don’t call out “Be careful!” or “Don’t buy the wrong kind again!” or “The store will probably be closed when you get there.”

The subtext of all of those is “I’m pretty sure you’re going to screw up.”

He can hear that loud and clear, even if you didn’t say it exactly.

The whole neighborhood can hear it.

Instead, expect what you’d expect from the male lead in the movie of your life. That is, if you want your movie to be a rom-com and not something depressing.

Of course he’s going to do well and return triumphant. You can act like you expect that, even if you don’t.

You could say, “I’ll be here in the tub, awaiting your victorious return with the Cocoa Puffs.”

At that point, he might as well be Ryan Gosling in La La Land. That’s how confident he feels knowing you think he’ll succeed.

It doesn’t mean he’ll become perfect. But it does mean he’ll do better, because people tend to live up to your expectations for them.

5. When He Asks What He Should Do, Give Him Your Trust

If he asks you which store he should go to or whether to use cash or plastic to pay for the Cocoa Puffs or what he should wear to the store, that’s the perfect opportunity to show that you esteem him.

You can do that by using this magical phrase: “Whatever you think.”

Maybe he’s used to you telling him how to make decisions, like my husband was.

But not this time. This time you’re going to act like you trust him to make his own decisions.

When he sees that you, who know him so well, trust him to decide where to go, how to pay and what to wear on his own, that will go straight to reinforcing his self-esteem.

6. When He Asks Your Desire, Tell the Truth

Sometimes a woman will get so fired up about using “Whatever you think” to show her husband she trusts his thinking that she misses the opportunity to let him know what she desires.

He’ll feel more confident and secure when he knows exactly how to please you, so if he asks what you want, tell him.

If he says, “What kind of cereal should I get?” he is asking your preference, and if you don’t give it to him, he’s going to feel insecure because he doesn’t know exactly how to make you overjoyed.

He’s going to seem nervous and anxious. He won’t seem self-assured at all.

But you can save the day by simply saying what you desire most.

As in, “I would love Cocoa Puffs!”

7. When He Asks Your Opinion, Give Him Your Appreciation

If he asks, “What did you think of me going to the store in the storm to get you Cocoa Puffs,” that is not the time to question his judgment or comment on the weather.

Yes, he’s fishing for appreciation, but why not let him have some?

You could say, “I felt so special and loved that you did that for me!”

It can’t hurt, but it could just help him walk a little taller knowing that you think he did something great.

8. Smile When He Comes Home

Since a big source of self-esteem for your husband is knowing that he pleases his wife, consider being happy to see him whenever you do.

Give him a smile that says “Here comes my hero!”

Knowing that you are reliably available for physical intimacy is a big source of confidence for your husband.

I know the problem is that you’re not always in the mood.

Why is it that when husbands are in the mood and try to initiate sex, wives never are?

But I do know that just because I don’t start out in the mood doesn’t mean I won’t get into the mood once I get started. I almost always do.

I notice my husband feels pretty good about that.

10. Let Him Solve Your Problems

When I have a challenge that has me perplexed, I ask my husband if I can borrow his brain.

It’s crazy how often he has a great idea that I just didn’t think of! So helpful!

But sometimes he comes up with a solution that throws out the baby with the bathwater from my perspective.

When that happens, I know he just doesn’t have enough information yet. So I keep going with expressing my desires, letting him know what I want that I forgot to mention before.

Since what we both want is for me to be happy, all we have to do is keep going.

When he finds a solution, I feel better and he feels all smart because he solved my problem. Win-win!

Everyone needs to be heard and understood.

I love using the phrase “I hear you” to listen to people I care about so they know that their words and thoughts are important to me and that I trust they know what’s best for their lives.

Consider giving your husband the entire evening to talk while you just listen and say “I hear you.” Or if not the whole night, try to do it just for an hour.

You don’t have to announce it. Just give him the space, look him in the eye, and do your best listening.

It’s funny how much people have to say when they feel heard and safe.

Actions speak louder than words, and listening is a powerful way to say “You’re important.”

And feeling important? I hear it’s great for self-esteem.

45 thoughts on “My Husband Has Low Self Esteem”