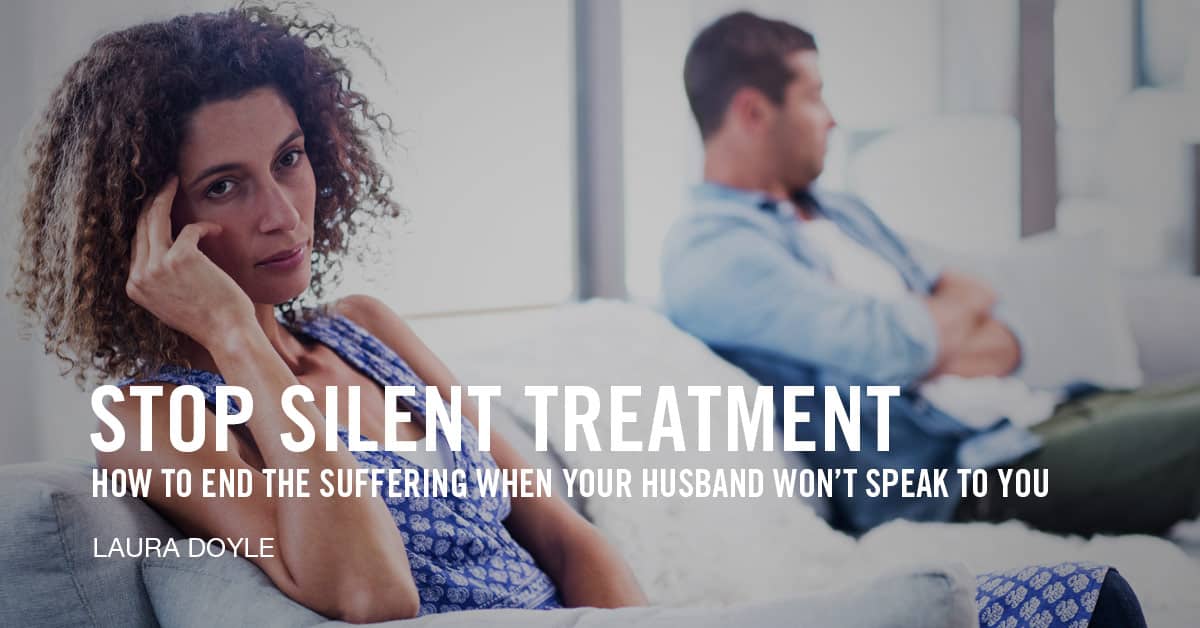 When your husband is giving you the silent treatment, it hurts. A lot.

I still remember how lonely it was when we had cold wars in my house.

Your brain goes into an endless loop of thinking about how to get him to talk to you again. It gnaws at you and colors everything else in your world.

You’ve already tried begging and pleading and confronting. None of that works. And giving him the silent treatment right back just creates a cold war.

So how can you ever connect again?

How do you stop these endless hostilities?

Step 1: Examine Your Side of the Street

Of course, the breakdown is his fault too. He’s definitely responsible for his part.

But to break the ice, a great question to ask yourself is, “What can I see on my side of the street that contributed to this cold war?”

You then have the key to the door you’ve been pounding on. When someone doesn’t want to talk to me, it’s usually because I’ve said too much or said it too forcefully.

I failed to listen and understand first, or else I got very attached to my view of things. In other words, I was disrespectful.

For instance, when my nephew wanted to quit a job I had helped him get through a friend of mine, I told him he was free to leave if it didn’t fit for him and that I trusted him to know what was best for him.

But after that, I listed all the resources available to him that he hadn’t taken advantage of, like speaking to his manager or to my friend about the challenges he was facing.

I assured him he didn’t have to suffer in silence or give up.

I reminded him it was a good opportunity.

The first part of the message was “I trust you,” but after that I wandered off into “But
you’re making a mistake.”

I’m embarrassed to admit I was not expecting the best outcome from his choices–I was
expecting the worst. How disrespectful!

So it should have been no surprise that once he quit that job, he completely avoided me.
He probably feared my judgment or hearing that I was disappointed.

I’d have avoided me too.

And I was disappointed, but not in him.

I was disappointed for myself. I wanted to be the smart, important person who had helped him get an internship that would be a springboard to even better opportunities in the future. I was quite pleased with myself about that, while it lasted.

But of course, what I want most of all is for my nephew to be happy. And he wasn’t happy at that job.

Or with me. That’s because, instead of hearing what he was trying to tell me, I stuck to my agenda for him. In other words, I wanted to be right, and it cost me connection with my nephew, which was a very high price.

As a result, someone I’m crazy about was not speaking to me.

Just like the cold wars I had with my husband in the old days.

And looking at my side of the street, I could see where I had something to clean up–if I was ready to admit that maybe I’d been a tad bit disrespectful.

If you find any mess on your side of the street, here’s what to do with that (and what I finally did with my nephew to thaw the ice):

You might wonder about how you can get your guy to apologize when there’s a cold war.

In the bad old days, when my husband and I were enduring wall-to-wall hostility, that’s what I was waiting for too.

Or, I would attempt to halt the hostility (read: make him talk to me again!) by saying “sorry” repeatedly without saying why I was sorry.

I was like Scarlett O’Hara from Gone with the Wind when Rhett Butler tells her: “You’re like the thief who isn’t the least bit sorry he stole but is terribly, terribly sorry he’s going to jail.”

I didn’t like to be in silent treatment jail. I felt like the victim of his abuse, but now I can
see how I was also the perpetrator.

I didn’t realize it at the time, but I was often disrespectful to my husband too.

He was my mirror in those moments–responding to me with defensiveness because he was so hurt and looking for ways to avoid further pain from the woman who vowed to love him but used her words to slice and dice.

In other words, he didn’t feel safe around me. Yikes!

And to be fair, I didn’t feel so warm and fuzzy about him either. But since I couldn’t make him apologize for his part, all that was left was to look at my side of things. That’s where I found I had the most power to improve the atmosphere in my home.

These days I’m much safer to be around, and we haven’t had a cold war for years.

That’s partly because I’m quick to scan my side of the street for respect slip-ups and to apologize for my specific transgressions.

So instead of saying “I’m sorry if I upset you somehow” and then getting a negative reaction to that and insisting “I SAID I was sorry!” these days I use my trusty formula and refer to exactly what I regret, as I recently did with my husband:

“I apologize for being disrespectful when I asked you when you were going to hire a new
contractor.”

I deliver the message just one time. I also leave out the word “if,” which is like saying
“I’m not saying I did it. You’re probably overreacting.”

Finding the humility to admit I was disrespectful and making amends for it can feel
uncomfortable, but the results are empowering.

I immediately feel more dignified and shiny. Instead of wallowing around in the dirt, I’m
doing what’s in my power to clean up.

And it seems to just melt my husband every time. Once he hears those words, the safety
is restored for him and the good times can roll.

There’s no need for him to stonewall.

Or my nephew, who seemed relieved when I apologized and showed up at my house shortly afterward.

Author John Harrigan wrote, “People need loving the most when they deserve it the least.”

When your husband is actively shutting you out, it means he’s angry.

Under that anger is hurt. Always.

In other words, he needs loving because he’s hurt.

The most loving thing you can do is show him you respect him in words and deeds.

Haley and her husband were talking about their son struggling to study vocabulary words
over the summer. “Maybe it’s because he’s in summer vacation mode and he’s used to
playing all the time, which makes it tougher,” her husband suggested.

Haley thought to herself, “Nuh-uh. He’s like that during the school year too.” In the past,
she would have said just that.

But this time, she took a breath and said, “Hmm. That could be.”

Then, something shocking and sad happened.

Her husband’s entire demeanor changed. His shoulders relaxed, his eyebrows lifted, he
smiled and said, “You like my idea?!”

“Oh, man! That about broke my heart,” Haley confessed. “These moments are helping
me see that being right is just not worth the pain it causes him.”

Had Haley argued with her husband in that moment, it might not have caused days of
silence, but it could have created the kind of pebble that stonewalls are made of.

The safer your husband feels with you, the longer you’ll go without a cold war.

Before long, you’ll realize you haven’t had one in a very long time.

Your relationship will seem much warmer, the conversation easy and relaxed.

Here’s to keeping your home fires burning bright with your formidable power to choose
respect.

How have you chosen respect in your relationship? I’d love to hear your comments below.