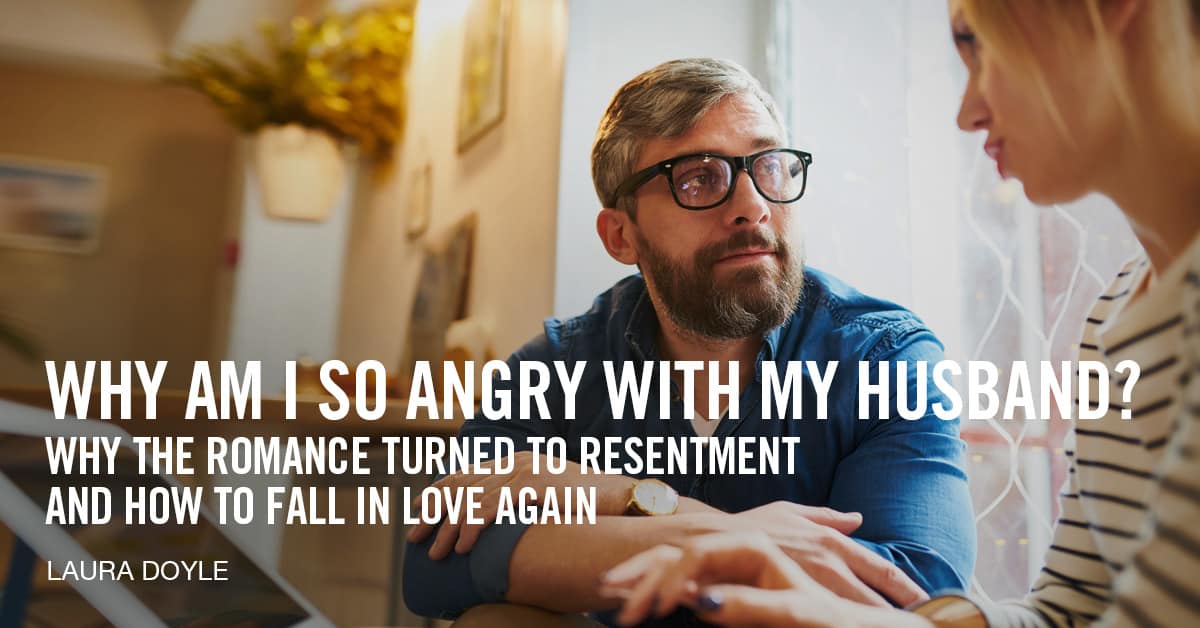 I have a nasty confession.

I verbally abused my husband.

There, I said it. I used to get so angry that I just could not control my temper with him.

I know that this doesn’t get talked about much. If your husband is annoying, it’s way easier to focus on his faults than to admit you’re a rageaholic like I was.

Not only was it painful and scary and out of control, something important was lost: my dignity.

Even once I decided to change my fiery ways, however, all I could find was conventional wisdom like “Don’t let your anger build up” or “Become aware of your anger and stop it” or even “Teach him what to do.”

Trust me, I tried that, and it only led to more spectacular fights. And if it were that easy to just stop it, I would have done it already.

Fortunately, there are practical tools that actually work, a set of skills that allows you to become your best self and makes your man easy to get along with too!

So if your spouse is annoying or angering, here are five ways you can trade in the resentment for romance.

1. Give Your Feelings Their Day in the Sun

Bottling your anger is like sticking a cork in a volcano. It’s going to come out one way or the other. When it comes out sideways and your frustration gets directed at, say, his dirty laundry placement, that can ultimately damage the intimacy just as much as a shouting match.

So what are you supposed to do if you want to stop lashing out but know it’s not healthy to stuff your feelings either?

If you want to increase the connection with your man, why not call a supportive girlfriend to vent instead?

When Sophia’s husband said his midlife crisis, which had put her through hell last year, must be an annual event and he couldn’t be bothered with anything again, she didn’t say a word. Instead, she called her sister and let all her bad words come out there.

She was so glad she hadn’t sacrificed the intimacy because later that day her husband spontaneously joined her for a bike ride. He ran around the whole block in flip flops teaching their son to ride a bike. The endorphins kept flowing as he danced salsa with her in the living room that night–after cooking for her and doing all the dishes, not with grumbling but with joy. True story.

It’s crucial to give your feelings their day in the sun. Maybe journaling lets it out for you, maybe a big ugly cry, maybe thrash metal.

As you get in touch with those feelings, you may notice that beneath the anger there’s always hurt. The latter can be scary to access, much more vulnerable than the power trip of fury.

But uncovering such vulnerability gives you the power to respond instead of react.

Next time that hurt (or anger) comes up with your husband, try simply saying “Ouch!” and leaving the conversation.

When Lily’s husband shook out a sandy blanket in the living room after she’d been cleaning, she saw red at his thoughtlessness. But, knowing there was hurt beneath her anger, she expressed that feeling by saying “ouch”–nothing more–and leaving the room.

As usual (now that she had the Six Intimacy Skills™), her husband came to find her minutes later and said, “I’m sorry for giving you an ouchie. I don’t want to hurt you.”

No cold war. No nursing a grudge for days. The resentment dissipated, just like that. Intimacy was restored effortlessly.

Every outburst has a trigger. Beyond what he did, which you can’t control anyway, what was your part in it? Maybe it’s as simple as you just needed a nap. It’s hard to be your best self when you’re exhausted or overwhelmed. Maybe you get irritable if you miss the Zumba class that fills you with joy every time.

Once you know what makes you susceptible to reacting, you get to take care of yourself so that you are the one in power, not your emotions. Being able to anticipate anger before it even arises gives you the choice of how to respond, a choice I didn’t have in the bad old days.

Speaking of healthy choices, did you know that you can actually schedule empowerment?

Yup, and you can increase your magnetism in my Self-Care Challenge: First, list twenty self-care ideas that make you happy while you’re doing them. Schedule at least three per day, putting them on the calendar as an appointment to make yourself a priority.  Maybe find a self-care buddy or support group like The Adored Wife Facebook group to keep you inspired.

Becoming responsible for your happiness is the indispensable first step to intimacy. This preventative medicine alone will bring outbursts way down.

If anger or an “ouch” does rear its head, try piling on even more self-care. Hula hooping, puzzle solving, juicy novel reading, navel gazing or cloud gazing, whatever lights you up. The more frivolous, the better!

3. Figure Out Exactly What You Want

If you’re anything like I was, when you don’t get what you want, the default reaction is to complain.

When you get mad that your husband’s idea of childcare is watching Sopranos reruns while your two year old fends for himself, what is it that you’re wanting?

Sure, you could let him have it for being a crappy father. But what if you tried expressing your desire in a way that inspires instead? Like telling him you’d love to have a child-friendly environment.

My student who did that was relieved when her husband agreed to put their son in daycare. Even after daycare, dad was careful not to expose him to adult TV anymore.

Believe it or not, your husband does want to please you. He just needs the information about how to do that.

Desire is the seat of feminine power, the north star for your relationship.

4. Express This Instead of Anger

When I thought my husband was a big ol’ Loser Pants, I was sure to let him know. I thought he needed that “helpful” information so he could change. The problem was he didn’t want to be around me much anymore.

If your man seems like a lousy husband, father, or homeowner (or all of the above), how has it served you to point out the error of his ways or tell him how to change?

If that’s not working for you so well either, I have a radical idea you could try instead: expressing appreciation instead of anger.

I know it sounds crazy when he’s falling so short and you’re doing so much, but bear with me for a minute.

Imagine if you were to be on the lookout for opportunities to catch him doing something good. By doing this detective work, you’re likely to find such opportunities a lot more.

That’s because what you focus on increases, so focusing on his faults or what you’re not getting actually magnifies the problem.

Especially when it comes to men. Chances are you’ve experienced that, as author John Gray puts it, “When a man does not feel loved just the way he is, he will either consciously or unconsciously repeat the behavior that is not being accepted. He feels an inner compulsion to repeat the behavior until he feels loved and accepted.”

If your husband leaves his wet towel on the bathroom floor and even gently reminding him fuels his compulsion to repeat the annoying behavior, what the heck are you supposed to do?

Why not wait for that one time he does hang up his towel… and thank him?

If you’re struggling to shake off the funk of resentment, I invite you to start a gratitude list. Write down every single thing, big or small, you’re thankful for about your husband. He works hard for the family or gave you a baby, he took out the trash or carried a dish to the sink. Every time you catch him doing something good, add it to the list.

Your marriage will soon look so much better by changing your perspectacles alone. If you really want to jumpstart the connection, express at least three of your gratitudes to him daily.

5. Hear His Side of the Story

Obviously, your man is not a trained monkey. If he hasn’t done something he promised, like doing the taxes that day, maybe he had a rough day at work and simply forgot.

Here are three magic words for bringing back the safety and trust in your marriage: “I hear you.”

In other words, you’re not agreeing or disagreeing, not trying to fix anything. You’re simply listening.

It might be hard at first when you’re so used to giving your opinion, but most women find that it’s actually freeing. And the more you listen respectfully, the more he’ll want to open up and share with you.

Having all the answers and knowing better than him may feel empowering, but it also makes you feel kinda like his mom. And nobody wants to have sex with his mother.

So saying “I hear you” is a simple and powerful way to bring back the romance too.

Which of these techniques will you experiment with today?

I acknowledge you for being ready to leave the rage monster behind. Here’s to becoming your best self–and having the intimacy you’ve always desired.

4 thoughts on “Why Am I So Angry With My Husband?”