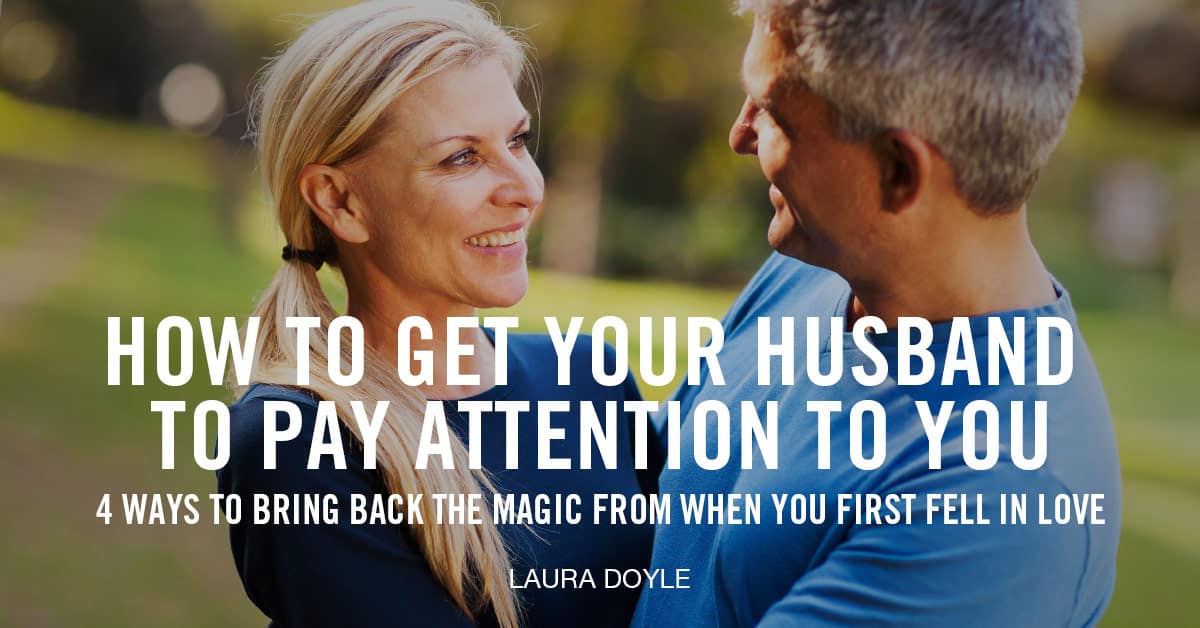 How to Get Your Husband to Pay Attention to You

Sometimes it feels like everything else is more important to your husband than you are: work, the kids, whoever is texting him. Even the dog gets more of his time than you do!

You’re craving his attention so much it hurts, and yet the whole day passes–and the next and the next–and he has barely acknowledged that you exist.

It’s easy to get resentful and feel unimportant. Him just asking about your day or sitting next to you on the couch would be so simple to do and go such a long way with you.

Since you can’t control anyone except yourself, how do you get him to improve?

Here’s how to solve this painful dynamic:

Part of what makes romantic relationships so electrifying is the gender contrast between you.

You were attracted to him because of his manliness.

He was attracted to you because of your femininity.

I don’t mean just physically feminine. This is not about lip gloss or strappy sandals (although I’m sure he likes that part too). I’m talking about your feminine spirit.

It’s intensely gratifying when masculine and feminine collide and connect.

Remember the magic you felt when that happened?

You were bringing your feminine self, maybe without even knowing it. You were receptive and therefore a powerful magnet to him.

That’s why you never had to ask for his attention then. He was fascinated by your emotional brilliance and softness–so fascinated that he committed to you above everyone else on the planet.

He signed up for a lifetime of being around your feminine spirit.

If you’ve since fallen into feeling angry, he can no longer see that irresistible spirit of yours.

He misses it as much as you miss his attention, but he doesn’t know how to get it back either.

I know it doesn’t seem like you’re choosing anger; it seems like the anger is a response to his neglect. But it’s blocking you both from something you very much enjoyed together.

You can make a different choice than being mad. You can take off that rusty anger armor and be as shiny as you always were.

Your femininity holds the key.

2. Find Evidence that He Pays Attention to You

Ava was convinced that her man didn’t love her anymore, as she outlined point after point when we spoke.

She had a very solid case against him.

And that was the problem.

When she thought about him, she was focused on all the things he didn’t do. He didn’t text her. He hadn’t called. He was away and incommunicado.

Each one of those things made her mad! And disappointed. And scared that she was not going to be loved.

There’s nothing scarier than feeling you aren’t going to be loved.

So by finding that evidence of him not loving her, she was causing herself to get upset and then angry, which obscured her beautiful feminine spirit, which, in turn, was proving her right.

In other words, she was creating what she focused on, just like we all do.

When I suggested that she make a list of the proof that he did love her, she said it was too painful because it wasn’t true.

But truth is a funny thing. It changes when your perspective changes.

When she finally started her list of 22 things that proved her man did love her, she only got to number 14 before she asked, “Why didn’t you tell me this would make me feel so much better?”

That moment, she was pleasantly surprised to get a text from him that started, “Hey beautiful! What are you up to?”

You could chalk it up to coincidence. But I see that kind of thing happen too much to doubt that changing her focus changed her experience.

In the heat of your anger, you might want him to hurt. That’s just human.

When you’re angry at him, he knows it. And like a little boy who’s in trouble with the principal, he avoids you to avoid his punishment.

But retaliating in anger won’t get you the attention you crave. Quite the opposite.

He’ll go out of his way to avoid the criticism, and therefore you.

I still remember how hard that was to wrap my brain around. I thought if I stopped criticizing his neglect, I was giving up on getting the attention I wanted, but my experience has been just the opposite.

When I started listening without judging or telling him what to do, he wanted to talk more.

Maybe you don’t feel like you want to smile at him. At all!

That’s okay. You don’t have to feel like it to experiment with it. You could just put a smile on the way you do for the receptionist at the dentist.

I find I feel better when I’m smiling anyway. So the fringe benefit of creating emotional safety for my husband is that I feel happier.

Do you say things like “You never pay attention to me!”?

Besides criticizing him, you’re also affirming the outcome you don’t want.

What would it hurt to start affirming the outcome you do want?

You could say to him (and yourself), “I love how attentive you are to me” or “I appreciate you giving me so much attention” or “I’m so lucky to have such an attentive husband.”

Saying that seems scary or uncomfortable at first because you’re so used to focusing on the negative outcome. You may feel like you’re leaving reality.

But since you’re not enjoying this reality that much, why not leave it in favor of having the attention you crave and deserve?

Changing my life for the better usually does feel scary and uncomfortable.

But it’s also been exhilarating to have a husband who seeks my company and hurries home just to give me his attention.

If I can create that kind of relationship, you can too!

Which of these 4 ideas are you going to put into practice first? I’d love to hear. Post your comment below.