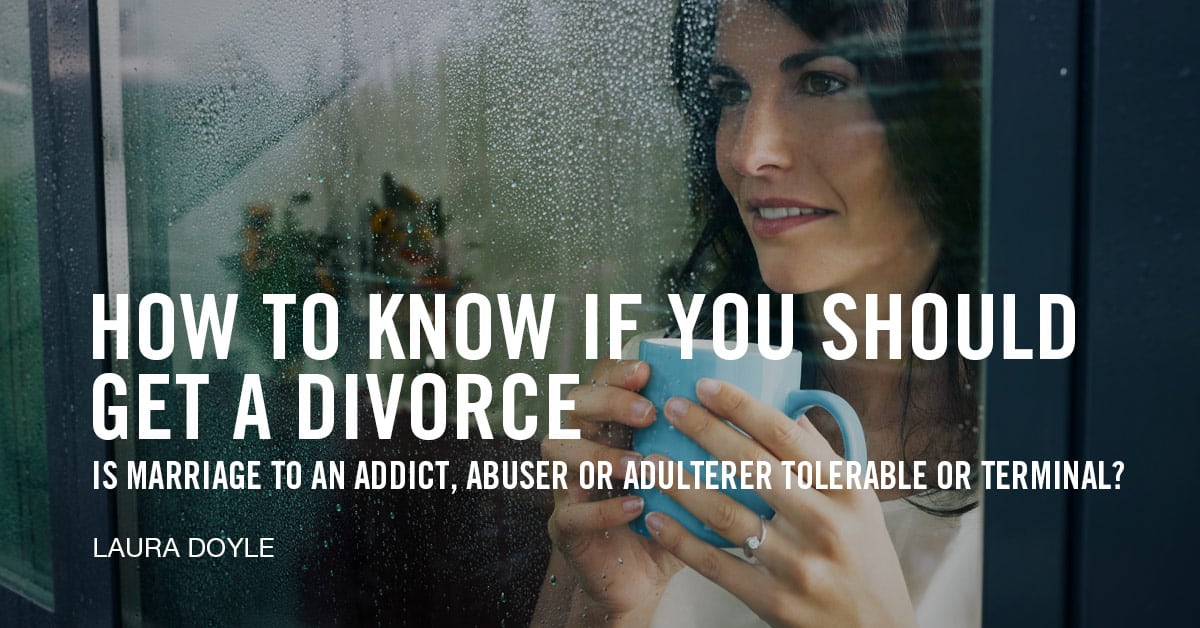 How to Know if You Should Get a Divorce

Is Marriage to an Addict, Abuser or Adulterer Tolerable or Terminal?

I hate hearing about anyone getting divorced.

But as a relationship coach, almost every day I hear from a woman who is in excruciating pain and on the verge of divorce because her husband is having an affair and refuses to end it.

Or his chronic, excessive drinking has put her over the edge and she is afraid of what the kids are seeing.

Or her self-esteem is gone because of the physical abuse in their home or because he engages prostitutes.

There was a time when I would have urged these women to leave such heartbreaking situations. I wrote exactly that in my first book and more recently in blogs like this one.

I presumed I knew what a woman in such a difficult situation should do.

As if I were the expert on her life.

Recently I’ve been confronted with something even worse about what I’ve written for all these years, and I’m embarrassed to say I was too afraid to admit it.

Here is what I didn’t want to admit about marriages to addicts, abusers or adulterers. Click To Tweet

1. I Chose My Fear over My Faith

When I was suffering in my marriage and thinking very seriously about ending it, I believed our challenges were insurmountable.

It turns out I was completely wrong. The root of our problems was my lack of training in the Six Intimacy Skills™.

But my husband was not physically abusive or drinking excessively, nor he has ever been unfaithful.

I have not lived through those particular hells, so those situations scared me.

Instead of standing for the possibility that marriages with challenges like these could be restored, I defaulted to conventional wisdom, which says a self-respecting woman should leave a bad man.

I made one exception because of my experience, and that was with verbal and emotional abuse.

I knew that wasn’t insurmountable because my husband and I both stopped saying terrible, hurtful, mean things to each other once I learned the Intimacy Skills.

Then I saw lots of other marriages where verbal abuse completely cleared up when the wife practiced Intimacy Skills.

I saw with my own eyes that verbal abuse was solvable, so whenever I heard women talking about that particular challenge, I brought my conviction about how her relationship could be magical again.

In other words, I chose my faith over my fear when it came to verbal abuse.

And I’ve gotten a lot of blowback about that, as you can see from the comments on this blog.

Some people got angry when I suggested that verbal abuse is not a clear-cut case of a victim and a perpetrator because both parties contribute to the melee.

So I was even more afraid to propose that women married to cheating, bullying drunks could also save their marriages and their dignity with the Intimacy Skills.

That was terrifying to say. It still is.

So here goes nothing: I’ve had the honor of watching courageous women who were married to alcoholics, physical abusers or cheaters make their marriages magical again.

Every relationship has challenges. And I now see that these three particular challenges don’t have to be deal breakers.

They are daunting but can be resolved as tender, connected marriages arise in their place.

I wouldn’t have believed it myself if I hadn’t seen it.

I am definitely not the expert on your life–you are. So if you feel that your marriage challenge is unlivable or insurmountable, I absolutely trust that you know what’s best for you.

Which is why I never should have written that women married to alcoholics, physical abusers or chronic cheaters should leave.

That was arrogant and bossy of me. I regret it, and I apologize.

Fortunately, lots of women ignored me on that point anyway.

If you are one of the millions of women facing any of those challenges and you want to preserve your family by making your marriage vibrant again, I’m here to offer you hope that you can do just that.

I’ve seen it happen too many times to doubt it.

There was the woman who used the Spouse-Fulfilling Prophecy on her alcoholic husband, who subsequently (and to her amazement) quit drinking as she repeated what felt like a bold-faced lie: that he “didn’t drink much.”

She called me, astonished that he hadn’t had a drop to drink in the two weeks since she had changed her focus.

Another wife wrote a blog about her similar experience here.

Then there was the young wife devastated by her husband’s affair.

“People told me that I would never be able to trust him again, but I now know that’s a lie. I trust him because I decided to trust him, and he’s living up to that trust I give him,” she told me.

Another wife explained that it wasn’t until she stopped focusing on the other woman, who had been in their lives for years, that her husband’s mistress disappeared from their lives and he turned his affection and attention back to her.

Still another woman whose husband had a mistress overseas and had slept with prostitutes throughout their marriage applied the Intimacy Skills as best she could, even as he left the country to be with the other woman. To her surprise, he came back to her and said, “I love you. I miss you, and I’m sorry.”

And this week, a wife who separated from her husband because in her view he was both physically abusive and alcoholic confessed to me that she had been looking for an excuse to leave him.

Her evidence was an incident where he was drunk and she pulled out her phone to videotape him to show him later how stupid he was being. Her husband hurt her hand wresting the phone from her so he could smash it to bits by slamming it into the wall repeatedly.

It was definitely bad behavior by any measure. But now that she has reconciled with him, she says she would use neither “alcoholic” nor “physically abusive” to describe her supportive, hardworking, thoughtful husband and father of their three children.

She now feels safe and connected. And he’s the same guy. He still drinks, but she doesn’t call him an alcoholic anymore.

These are just a few of the miracles I’ve witnessed.

3. There Are No Good Guys or Bad Guys

Here’s another problem with what I wrote about husbands who are actively addicted, physically abusive or chronically unfaithful: I said if your husband is not one of those, he’s a good guy, which implies the other three I singled out are bad guys.

One of my coaches called me on this while training with me, and I felt terrible.

She explained that her husband identified as an alcoholic and had slips from time to time with his sobriety, but it didn’t make him a bad guy.

I couldn’t argue with that. Of course her husband was a good guy. She wouldn’t have married him otherwise.

Just as my husband went from being a hopeless loser-pants back to being the smart, handsome, funny man I’d married once I changed my perspective, I’ve seen that even alcoholics, abusers and cheaters improve dramatically when their wives choose respect and gratitude over criticism and blame.

Defining an alcoholic is tricky business. Who’s to say for sure that your husband qualifies?

Carla told me she was sure her husband was an alcoholic but he didn’t think so. It ended up being a source of conflict until he died after 45 years of marriage.

As a widow, she told me she wonders if perhaps she had been too eagerly looking for a problem and then found what she was looking for.

I could relate! When I was looking for a loser-pants, that’s what I found too.

4. We Have Nothing to Fear but Fear Itself

Safety still comes first. If you believe you are not safe or that your children are not safe, then I support you becoming safe, whatever that looks like for you.

I’m not suggesting that women with husbands in these three categories should just suck it up and put up with hurtful conditions indefinitely.

I’m talking about the real possibility of these wives creating amazing, vibrant marriages–the kind every woman dreams of. Nothing less.

Of course, if that’s your situation, you may be afraid that you’ll suffer trying to get there.

The biggest problem early in my marriage was that I was afraid. I was terrified that I would be hurt, abandoned and treated unfairly.

I focused on that so much that I created a marriage where I felt hurt, abandoned and treated unfairly.

Just goes to show you how powerful I am at manifesting.

It’s not just me. We’re all creating what we focus on.

Today I’m careful where I point my manifester.

I know it’s impossible to experience anything but what I’ve been focusing on.

When my fear arises, as it does from time to time, I question it. I tear it down by gathering evidence to the contrary in the form of a gratitude list.

Now I understand what Franklin D. Roosevelt meant when he said that we have nothing to fear but fear itself.

So even though I feel some fear about coming out in favor of all women who want to use the Six Intimacy Skills to save their marriages–including those married to alcoholics, cheaters or physical abusers–I’ve decided to focus on how many have already come forward after successfully getting the relationship of their dreams.

By being the first to do it, you’ve paved the way for thousands more to create the marriage they’ve always wanted with the man they chose.

If that describes you, I acknowledge you for your courage! It inspires me to see what you have accomplished.

86 thoughts on “How to Know When to Divorce”