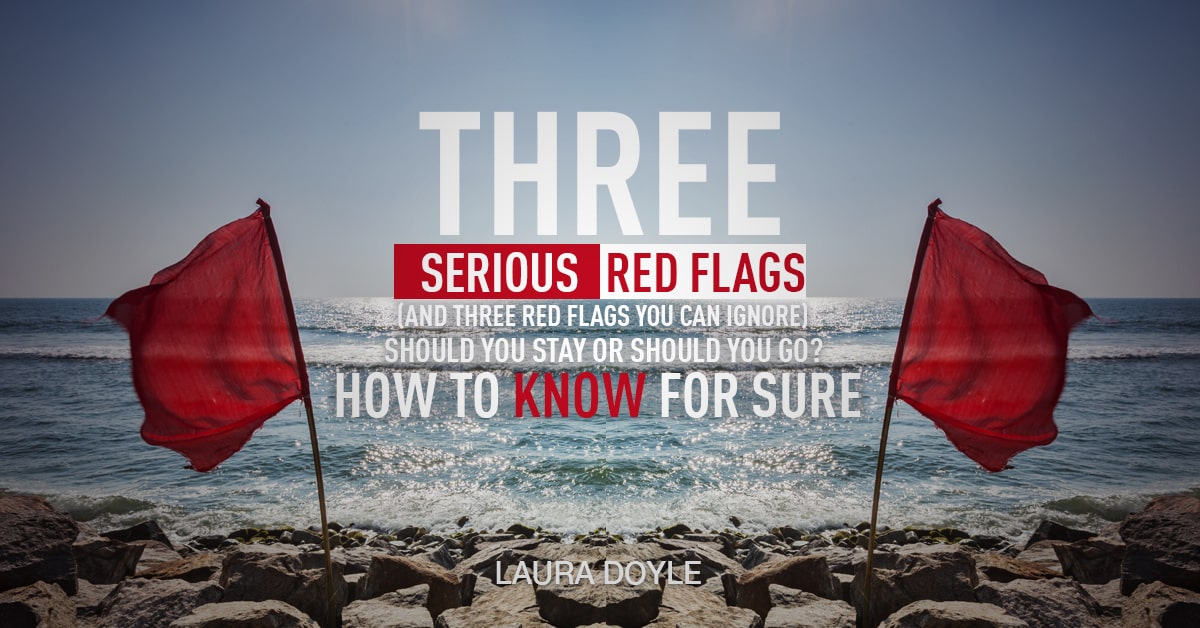 Should you stay or should you go? How to know for sure

Most men are good guys. Not perfect, of course–but it’s safe to marry them, live with them, and have kids with them.

Chances are high that your guy falls into this category.

But there are a small percentage of men who aren’t safe to live with.

And although I’m an advocate for marriage, if you’re married to a man you aren’t safe with, then you are in an abusive relationship. In that case, I would be the first to endorse your divorce.

Fortunately, it’s not hard to figure it out. There are only three red flags to look at, but there are plenty of fake red flags that could throw you off. I’ll explain which ones are real and which ones to ignore.

UPDATE: When I wrote this blog years ago, that’s what I thought, and the rest of my thinking at that time follows below but I have since been SCHOOLED and found out…

Here’s what I have learned about how to know when to get divorced, along with my mea culpa: https://lauradoyle.org/blog/how-to-know-when-to-divorce/

This newer blog is MUCH more informative.

I’ll break it all down in this blog so you’ll know exactly which category your guy falls into: Either he’s a good guy, or he’s a man you’re not safe with.

Here are the three red flags (and three things you can quit worrying about):

Red Flag #1: He’s Ever Hit, Punched or Sexually Assaulted You or Your Kids

Obviously if your man can’t control his impulse to physically attack and harm you or the kids, he’s not safe. But let’s take a look at exactly what that means, and how to know if your guy really falls into that category.

If your guy has hit you, punched you or sexually assaulted you or your kids, you are in a physically abusive relationship. I support you doing what you need to do to make yourself safe.

Another hallmark of a physical abuser is that he has a hard time knowing the difference between a wife or girlfriend and a hostage. He takes your cell phone, won’t let you talk to anyone, or bars the door when you try to leave the room or the house. He doesn’t want you to go anywhere with anyone else.

He may keep you hostage financially. That’s why it’s often so flipping hard to get out of such a relationship. By the time you could make a call, the crisis is over and he’s telling you that you’re overreacting.

The whole thing is crazy-making–and demoralizing and horrible.

I can’t offer you any hope that it will improve, but I can validate your desire to get out. I don’t want to minimize how hard that can be–especially if you have kids.

With a physical abuser you’re not safe. He could decide to harm you at any time, and there’s nothing you can do to avoid or prevent it.

A physical abuser gets a release from hurting you and no matter what he says, chances are high that he’ll do it again. You’re living with a ticking time bomb, and it’s terrifying.

No matter how many other good qualities he has, that’s a divorce I endorse.

#1 Red Flag You Can Ignore: A Physical Defender

If you initiate physical aggression by pummeling him with your fists, kicking him, shoving him or trying to get something by force, even a good guy will defend himself or restrain you.

This is not a physical abuser but a physical defender. He responds to your physical threat by restraining you–maybe holding your arms uncomfortably behind your back, or holding you down on the bed–or pushing or shoving you to keep you away from him.

He doesn’t have an irrepressible urge to hurt you, but he will defend himself in kind from your physical threat.

In that situation, you have a good guy. Really.

I get that it’s high-drama, but you can stay and fix that without putting yourself at risk. (The Six Intimacy Skills are a great place to start. they cured me of being a rageaholic).

Red Flag #2: Your Guy is Actively Addicted to Drugs, Alcohol or Gambling

Addicts aren’t a terribly accountable, responsible or reliable bunch. They vanish when you’re counting on them. They call you crazy a lot, or contradict reality. They are hostile, and blame you for things that aren’t your fault.

You might call it verbal, mental or emotional abuse, but in a way that’s a distraction from the real issue. (If you wonder whether you’re in a verbally abusive relationship, I have a revealing post about that here.)

Alcoholics, drug addicts and compulsive gamblers will always serve their addiction first, above you or the kids or anyone else. Because of that, you’re not safe, which means you’re in an abusive relationship.

But how can you tell if he’s an everyday drinker or an alcoholic? Is he an occasional pot-smoker or a guy who has to get high? Someone who enjoys slot machines or who really can’t control himself in a casino?

An addict is someone whose substance use or gambling is detrimental to his work, relationships, finances, family or health.

This is not a black-or-white question, granted, but I’ve never yet met a wife who didn’t know the answer in her gut.

You have the answer in your gut too.

One wife worried that because her husband loved to play poker he might be a gambling addict. But since he never spent more on it than he could afford, and it wasn’t a compulsion that made him forget about or neglect his other commitments, he didn’t fit the addict category.

#2 Red flag you can ignore: Addiction to cigarettes, video games, food or his phone

All of these habits can be annoying, but in my experience they don’t affect your safety and therefore don’t qualify as a hallmark of an abusive relationship.

Your husband has a vice, but you’re not a victim.

Red Flag #3: Your Guy is Not Capable of Being Faithful

It’s such a painful thing, because these cheaters are often also really charming and tender when they’re with you. It can be glorious to have this man’s undivided attention, but the problem is, you never will have all the attention you deserve. So you become accustomed to settling for crumbs, and you put up with deceit and loneliness. You become insecure. It hurts your spirit, and puts you at risk for diseases.

If that’s not an abusive relationship, what is?

So how do you know if your man is capable of being faithful?

Good news: You already know. You don’t need me to tell you. Every woman I’ve ever worked with whose husband was not capable of being faithful not only knew it, she knew it before she married him.

I was surprised to learn this, but it makes sense.

People tell you who they are. They can’t help it.

They do it right away–right on a first date or even before–long before you’re in a relationship.

Here are some of the examples I’ve heard about: One man told his date that he “wasn’t perfect” when it came to being faithful to his ex-wife. Another witnessed her boyfriend hitting on someone else when she came back out of the convenience store.

That said, there is a possibility that your man has both cheated on you AND is capable of being faithful to you. Click To Tweet I explain about that here.

I know it’s not fun to think about your guy looking at other women doing graphic things online. It can bring up feelings of jealousy for sure.

He’s not cheating on you–he’s looking at a two-dimensional woman that he’ll never meet. That doesn’t make you unsafe.

Plus you have the advantage over her: You’re three-dimensional, in the flesh right in his bed. You’re the one he chose.

Not a perfect man, but one you can have a wonderful relationship with.