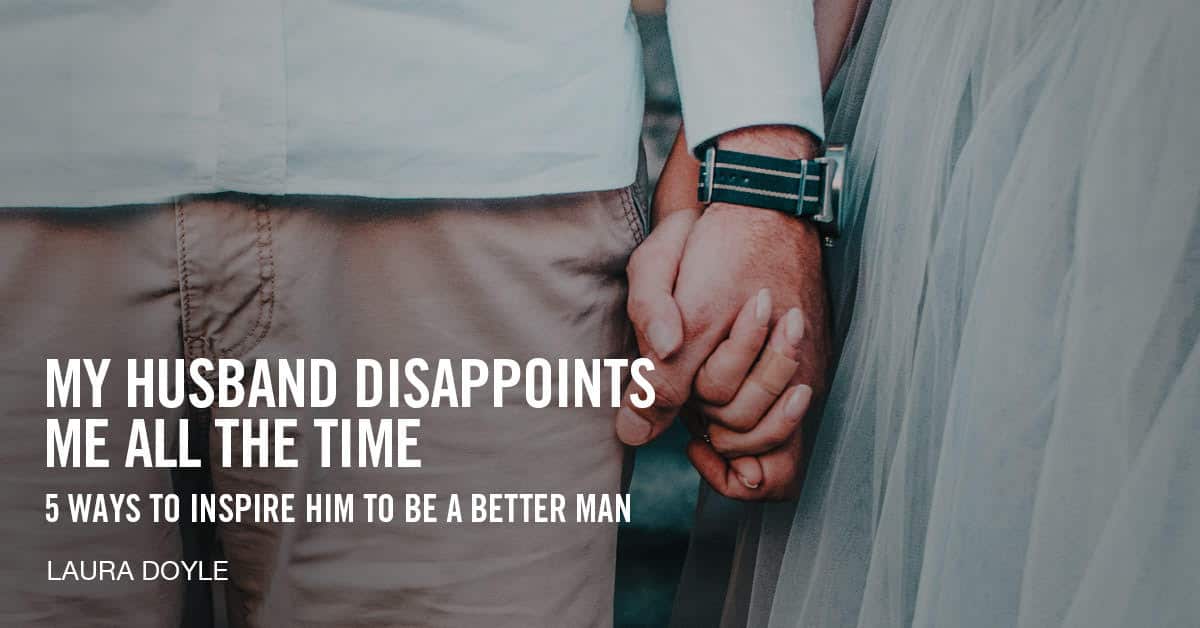 My Husband Disappoints Me All the Time

5 Ways to Inspire Him to Be a Better Man


Being constantly disappointed in your marriage can wear you down and make you hopeless about the future.

Maybe your husband disappoints you when it comes to celebrations–he forgets your anniversary, gets you a present that has nothing to do with what you like, or acts like it’s just another Wednesday.

Or, let’s say he complains when you’re sick because you aren’t doing the things you normally do. The demoralizing message is that you’re not that important except for what you contribute, not to mention his lack of compassion when you just want to be taken care of!

Or he may be a disappointment in a bigger sense, like not showing up to be the dad your kids deserve.

Either way, you don’t have to just suck it up and continue to hurt endlessly.

1. Catch Him Doing Something Good

Although your husband seems to be letting you down a lot, that’s not his intention. No husband wants to disappoint his wife–quite the opposite. He married you with the intention of making you happy, not crushing your hopes and dreams till death do you part.

That desire to delight you is still in him, even if you haven’t seen it for a while. One way to fan the flames of that desire is to wait for him to do something that you like–even if it’s something small–and pounce on him about it. In a good way.

You could say, “I noticed you made the bed this morning, and that made me so happy! I just love that you were so thoughtful and made the bedroom look so beautiful for me. Thank you, sweet husband!”

Sure, there are lots of things he’s doing that are letting you down, but he did this one thing right and by focusing on that, you let him know that he can succeed in making you happy. Once he feels like a success, he’s likely to look around for more ways to delight you.

2. Express Your Desire in a Way that Inspires

Every year, Belinda complained that her husband let her down on her birthday. He never got a present or planned anything special, which left her feeling unimportant.

“I just want him to do something special for me,” she told me. “I don’t know what, but you’d think he could figure it out.”

When I asked what would make her happy on her birthday, at first Belinda was confused. “The whole point is that I want him to surprise me,” she said. “If I have to figure it out myself then what’s the point?”

Sure enough, her husband took the whole family out to the new Mexican place for her birthday. After dinner he announced, “Now we’re going for a walk on the pier.”

You might argue that it wasn’t very imaginative on his part to do exactly what she’d said she wanted, but it was the best birthday she could remember having in years. Which, of course, she told him now that she had multiple opportunities to catch him doing something good.

She was amazed that when she said how much she enjoyed the birthday activities he had planned for her, he grew a foot taller and beamed.

3. Let Him Know How Happy He Makes You

This leads to one of the most powerful ways to stop getting disappointed by your husband: telling him how happy what he’s doing is making you.

One woman told her husband how much she appreciated him working hard to support the family even though she didn’t think that would be a big deal to him. She was surprised that he got something in his eyes right then.

When you find the specific things that he does contribute to your life and get happy about them, they will multiply.

But what do you do with those disappointed feelings that keep popping up?

Telling your husband how disappointed you are, again, is just going to make him defensive. It will never inspire him to stop disappointing you. Even though it seems that’s how it should work, it never does.

If you decide you want to preserve the intimacy in your marriage but you also need to process how disappointed you are that he doesn’t like to spend time with your family, you could talk to a neutral party, like a friend.

Like the time my husband walked on the new rug with his freshly polished black shoes and wrecked the rug.

Sigh. I just needed to talk to someone about it, but he already felt bad enough, so I didn’t want to talk to him about it.

My BFFs gave me the empathy I needed so I didn’t create a marital problem in addition to the problem with the new rug.

Sometimes my husband disappoints me because I’m already in an agitated state. I’m tired or hangry or sick, and the world doesn’t look right.

I recently had a cold and wanted him to take care of me by bringing me soup.

But he didn’t know that. In fact, when he asked if I was hungry I said I wasn’t, and then I was disappointed that he didn’t try to force nourishment on me.

Being sick will cause lapses in logic like that, in my experience.

John would like the record to show that he did go get me soup after I said I wanted it.

Most of the time I’m pretty good at figuring out what I want and expressing that or giving it to myself so I don’t get resentful toward him for not reading my mind.

The more happy and fulfilled I am, the less chance I have to feel disappointed about anything my husband does because I can more easily hold on to the perspective that the man just wants to make me happy.

Which of these five tips will you focus on this week? Will you share more gratitude? Express your desires? I’d love to hear in the comments below.

15 thoughts on “My Husband Disappoints Me All the Time”