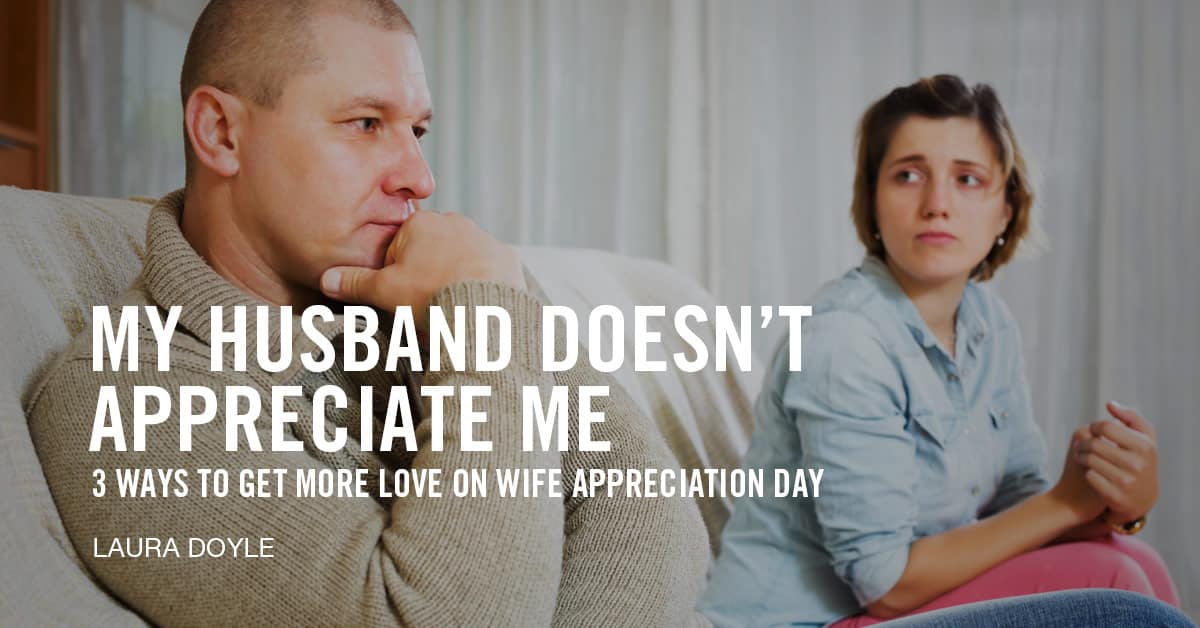 My Husband Doesn’t Appreciate Me

When your husband is on the couch watching TV or staring at his phone while you’re doing the zillionth load of laundry, shuttling your kids around for the fifth time that day or putting in long work hours, it can rub you the wrong way.

Especially if he doesn’t even seem to know how clean underwear magically appear in his drawer.

It would go a long way to know that he sees how hard you work and that he values it.

But it appears he has no idea. He’s not even aware of all it takes to keep your household running smoothly, which makes you feel lonely and taken for granted.

You could tell him, but what would that accomplish? He’d only nod and listen as long as he thought he had to before he could get back to the TV or phone.

Then you’d feel even lonelier and less appreciated.

At least that’s how it went around here back in the bad old days.

Fortunately, there is a much better way to get some recognition from your husband, which all humans need at times.

1. Create a Culture of Gratitude

Before I learned the 6 Intimacy Skills, I was pretty stingy with appreciating my husband.

I was afraid that if I thanked him for what he was doing, he would think he was doing enough. I didn’t want to send the wrong message.

I also worried that if I thanked him for taking out the trash he would think it was optional and stop doing it, then I’d have to add that to my already too long to-do list.

So I withheld gratitude. I told myself he already knew that I appreciated him anyway.

Of course he worked hard and did a lot of things to lighten my load, but I was busy focusing on what he wasn’t doing that I thought he should be doing, so I didn’t see why I should be grateful.

I now know I can’t be grateful and resentful at the same time.

Choosing gratitude meant I had to give up my resentment, which somehow felt as hard as parting with a precious family heirloom because I was so used to having it.

It wasn’t until I made it a point to find at least three things a day to appreciate about him that I realized I had been completely wrong–about everything.

First, I learned that my husband didn’t know I appreciated him until I started telling him.

I know that sounds obvious when I say it like that, but I couldn’t believe how fast I got a better response when I said I was so happy the trash was emptied or that the kitchen looked so much tidier after he cleaned it or how much I liked the way the yard looked after he trimmed the bushes.

Once I expressed my appreciation, he actually looked for ways to delight me further by putting gas in my car, bringing me a cup of tea or fixing the broken sprinkler.

One husband described this happening at their house also after his wife had been so grateful to him for fixing a broken cabinet. He thought to himself, “What else can I break around here so I can fix that too?”

Seeing my husband put all that effort into making my day sure made me feel like he valued me after all.

But there was more.

The more I appreciated my husband for everyday tasks, the more he started to respond in kind by appreciating me for making dinner and putting away laundry. The result was that we now have a culture of gratitude in our home where we’re always thanking each other.

I’m guessing your husband works hard and does a lot too. He may also be longing for some acknowledgment. Again, that’s just human.

Saying things like, “I appreciate you working so hard to support the family,” “Thanks for always taking care of the cars,” or “You’re such a great dad” can go a long way toward creating a culture of gratitude where you both feel appreciated.

If you find yourself feeling resistance to giving appreciation to get appreciation, I totally get it. I felt the same way.

But ultimately I decided that I wanted to be a grateful wife, not a bitter, resentful one. So it was really about me. As a fringe benefit, I got more recognition too.

Another block that stood between me and feeling appreciated was this weird habit I had of giving myself responsibilities that no one said I had to do and that I didn’t want to do but I made myself do anyway.

I’d volunteer for all kinds of chores and favors then be stressed out and exhausted afterward.

Then the world looked wrong because I was so depleted. And my husband, who just happened to be there because he lives with me, seemed especially intolerable.

There was no amount of appreciation that could fill my tank in those moments, and I had lots of those depleted times in the bad old days.

I was operating from a cavernous deficit that no bouquets or other sweet gestures could fill.

These days I’m slow to volunteer, am quick to leave dishes in the sink for however long and rarely get into that painful state of self-betrayal.

If someone else asks me to do a task that’s more than I can handle, I use these magical words to decline: “I can’t.”

That phrase has saved me so much grief and so many hostility hangovers that I’m very fond of it.

If I don’t overdraw my energy, I don’t turn into a fire-breathing dragon. It’s that simple.

I’m not perfect though. One time my husband needed a ride to the airport very early on a busy workday. I forgot to say “I can’t.”

Instead, I got overtired and grumpy. It wasn’t pretty.

I shrilly asked him why he had to go so early and pointed out that he wasn’t considerate of my schedule at all. Then I glared at him and fumed in stony silence while he nervously waited for the storm to pass.

Using that phrase has meant that I can feel my husband’s appreciation and delight, instead of angrily wondering why I have to be the kitchen elf while he gets to have a good time.

If you haven’t tried saying “I can’t” yet, I highly recommend it.

3. Look for Evidence that Your Husband Appreciates You

Another thing I did that doesn’t work very well is gather evidence that my husband doesn’t appreciate me because he wasn’t showing appreciation the way I thought he should–by telling me so and offering to take on more responsibility.

I don’t recommend that.

What I focus on increases, so if I focus on how he’s not giving me the appreciation that I want, I’ll never get it.

If, however, I decide to focus on whatever small things he is doing to show his gratitude, even if it’s not quite what I had in mind, I immediately feel more seen and recognized.

Therefore, I recommend getting out your magnifying glass and searching for all the evidence you can that he appreciates and loves you.

Maybe he didn’t tell you directly that he appreciated you, but he did tell his brother on the phone that you were working hard. That shows he notices.

It could be something more subtle, like a knowing smile, a simple hug or a momentary backrub.

When I’m keenly focused on how he is appreciating me, even if it’s just him saying thanks when I tell him where his shoes are, I start to feel more appreciated.

How do you know your husband appreciates you?

17 thoughts on “My Husband Doesn’t Appreciate Me”