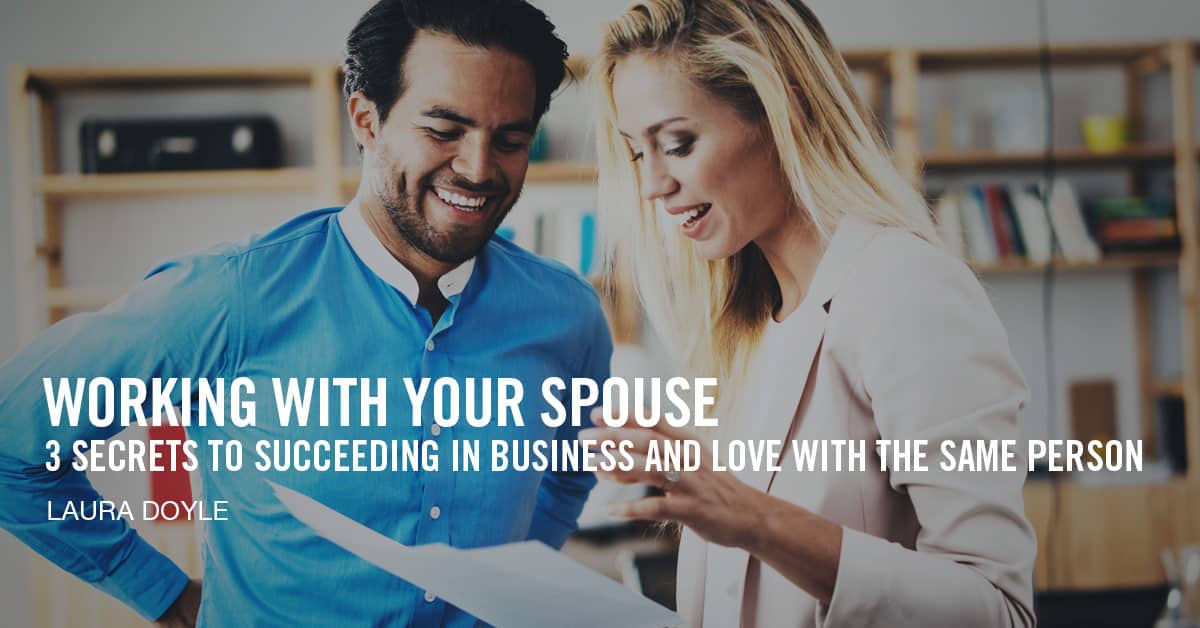 Working with Your Spouse

When you work with your spouse, it can be too much togetherness. Plus, if you don’t see things the same way, it often creates tension both at work and at home.

There’s no pressure relief when the work conversation goes on through dinner. And no escaping the problems at home when you leave for work either.

This can stress your marriage big time–or it can be a great way to keep more money in the family and spend more time with the person you chose as your partner in life.

Having experienced it both ways, I’m grateful to know what makes all the difference.

My husband John and I are both entrepreneurs who work from home.

In the early days, I wanted to manage my husband like an employee by telling him which projects to prioritize and how to do them.

Not that I was very qualified to do this, mind you, unless you count getting fired from my job.

I was then going to help him count all the money after he did what I told him to, but that never happened.

He resisted my instructions mightily, and our business ventures floundered. Our personal finances were in chaos.

My marriage was in trouble too, for the same reason. I had become a porcupine wife he mostly avoided.

I thought the problems were because he was so uncooperative–never that I was overbearing. I believed I was smarter than him so it only made sense for me to “help” him.

I didn’t know that “helpful” in wife language is “critical” in husband language or that fear lurked beneath my urge to control the smart man I’d married.

I had no idea I could choose my faith over my fear in those moments, but now that I have a world-famous system for doing just that, I see the direct connection between the steps that revitalized my failing marriage and the dramatic improvement in our bottom line.

Here are the life-changing things I did that helped us both succeed:

1. I Stayed Out of His Business to Focus on Mine

When I was the armchair quarterback of my husband’s business, I wasn’t tending to my own life, which was like a car going down the street with no one behind the wheel.

It turns out there was a good reason I was avoiding my life: I was scared to show up for it.

When I switched my focus from his life to mine, abundance emerged. I was called to write a controversial book, which got me lots of hate mail but also became a NY Times bestseller translated into 19 languages in 30 countries.

Dateline NBC did an investigative report on my methods, which was terrifying (national TV–yikes!) and thrilling because the book shot up to #1 on Amazon and launched a worldwide movement. Next I was invited to give live talks, which I’d never done before, and I started an international relationship coaching company–also the source of free-floating terror.

I’m not sure if my calling will ever get less scary. Most recently, I was hyperventilating on the phone to my sister while preparing to film season 1 of my own TV series on Amazon Prime.

No wonder I just wanted to focus on what my husband was doing. That seemed less risky, but it was also less thrilling.

Now I know if something is utterly terrifying, it’s probably a good sign that I’m supposed to do it. That’s been my GPS for success the last couple of decades.

When I’m tempted to manage my husband’s life, I’m probably avoiding the next big thing in this adventurous mission I’m on to end world divorce.

My husband also ended up being very successful with his business when I gave him the space and respect to make decisions as he saw fit. Who knew?

Now when we work together, I just stay in my lane and admire the good work he does in his.

2. I Asked My Husband for Help With My Business

Even though I forgot for a while, John is wicked smart and wants me to be happy. He has my back, so he’s a fantastic resource for business advice. I’m constantly asking to borrow his brain.

In the bad old days, he would make suggestions and if I didn’t agree I would shoot them down, leaving us both frustrated and drained.

These days I know that I can listen to his ideas and if they don’t sit right with me, that just means I need to keep saying what I want or ask for more help.

For example, for a while now, my videographer husband has been expressing his view that my business would be well served to have a presence on YouTube. That sounded great to me on paper and, as a writer, paper is where I’m most comfortable. But I couldn’t imagine what the visuals would be for my videos. Actors? Illustrations? Hand puppets?

So I said what was true for me, which is “I would love that! And I don’t know what to show on those videos.”

John collected the videos that I already had but hadn’t crossed my mind, and he put them together for me. There are a few clips from my Cherished for Life Weekend up now, along with my recent media appearances and a preview of my Amazon series. Voilà: I have a YouTube channel.

(Cue “You Are the Wind Beneath My Wings.”)

3. I Focused on What I Wanted More Of

Long before my husband started his business, I had unwittingly been repeating a negative Spouse-Fulfilling Prophecy about how he could make more money if he would ask for a raise or get a better job. What my husband heard was, “You don’t make enough money.”

This is how good I am at manifesting what I focus on: He quit his job and wasn’t making any money.

When I realized I’d been sending the opposite message of what I wanted to manifest, I decided to switch it up. I came up with the Spouse-Fulfilling Prophecy “You’ve always been a good provider.” And, just for fun, I started calling him “Mr. Moneybags.”

Around that time, my husband started the video business he has now and became more successful financially than he’d ever been, as well as happier working for himself.

Now I make a habit of watching what I’m speaking into everyone on my team.

The results of focusing and speaking about the outcome I want instead of the one I don’t want have been breathtaking. It’s the secret to my success.

17 thoughts on “Working with Your Spouse”